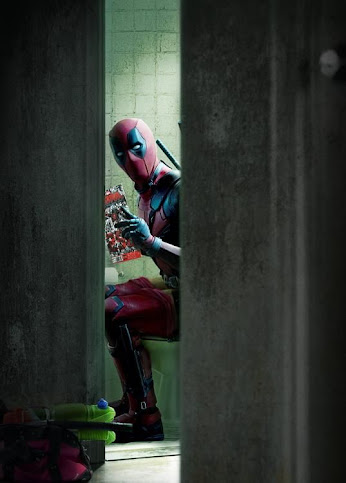 Because one review is sometimes just not enough! Kent went back to the theater to see Deadpool again and review it again!  What did he feel about the film on the 2nd showing?

As I sit in theater, spine twisted like a pretzel and just a mere pint and shot to try and ease the pain I have been in since Wednesday, I started to think to myself, “When was the last time I paid to see a movie twice?” The only time in recent history I could think of was THE MATRIX RELOADED (2003). That was the last time I thought a movie was so kick-ass that I paid my own money to see it twice! After talking to TOY LAB and MISS ELLYS, I started to wonder what about DEADPOOL made it worth such a reinvestment? I think its probably because the backstory and eventual victory, is kinda like a ROCKY movie. If I mention some stuff you may already know,well F-Beep you, I'm writing this! Ryan Reynolds, who IS an actual fan of Deadpool (Which helps BIG TIME) has been trying to get this movie green lit for over 11 years. The biggest obstacle was that NOBODY in the movie industry really knew who Deadpool was. They were more than happy to take a chance on Ang Lee directing that sand-paper-condom-f-Beep-fest known as THE HULK. Which, I think we all remember what a dumpster fire that turned out to be. Did Ang Lee advise on this last Fantastic Four? Anybody know? Studios lacked the faith to take a chance by a studio on a new or not popular character. So, fanboy that he is, Reynolds toiled along. Until FOX Studios gave him an offer he couldn't refuse. They told him that if he agreed to play Deadpool, the way THEY wanted him to in X-MEN ORIGINS: WOLVERINE, then they would CONSIDER doing something with this whole Deadpool idea of his. In truth, it was tad amount like f-Beep'in’ blackmail but, Reynolds believed in it so much that, he went along with it. The rest is “Good start, what the f-Beep did you have in that crack pipe when you came up with that ending?!?!” So, Reynolds started to pressure FOX on their promise, which turned into one cock-block after another. First, they didn't have a director. So, Reynolds hooked up with little known director Tim Miller. Who, as luck would have it, was a fanboy of Deadpool as well. Then there was “Well, your going to have to have a team of writers on this.” So, they got Rhett Reese, Paul Wernick, Fabian Nicieza and Rob Liefield. The next and probably biggest nut-punch of all from FOX was actually not DIRECTLY their fault. It was the by-product of a big screen image that Marvel and lately Disney had grown. Superhero movies had a certain “Curb Appeal” a certain way they were supposed to look or sound. THIS, by FAR was the biggest double-tap-to-the-back-of-the-head of Deadpool! He simply DID NOT have such appeal! He wasn't shiny or valued or had some defining moral compass. He is a f-Beep'in’ hot mess! He is insane (Which normal people get.) potty-mouthed, sexually deviant and a host of other sh-Beep that FOX and EVERYBODY avoided like a f-Beep'in’ STD! He really didn't have a recurring arch-rival. He basically thrust himself into others situations and he had this whole “I know I'm in a comic book” fourth-wall shattering thing! So, FOX tried REPEATEDLY to kill Deadpool! However, much like in the comics, he just kept coming back to life. Until finally, I'm still not sure why, FOX agreed to do some test footage. Test footage that was somehow leaked online…? We still don't know by who but, it could have only been one of three people. So, the public outcry for Deadpool was so great and after a sh-Beep-tastic Fantastic Four, FOX not only finally green lit the movie but, gave it the R rating it so desperately deserved. Bully for you FOX!I will caution you. Just because the R rating worked well with Deadpool, that DOES NOT mean it will work with ALL of your Superhero movies. I mean, you could definitely get away with an R rated Wolverine. However, don't think that just because you slap an R on it, people are going to go see the next Fantastic Four movie you make (C’MON MAN! Sell that shit back to Marvel, already!) So, I would have a long, hard look at the future projects you may be considering to rate R. So, in closing, YES. That is why I went to go see Deadpool again. Have you? If so, why?﻿

For more no nonsense reviews by Sir Kent see: