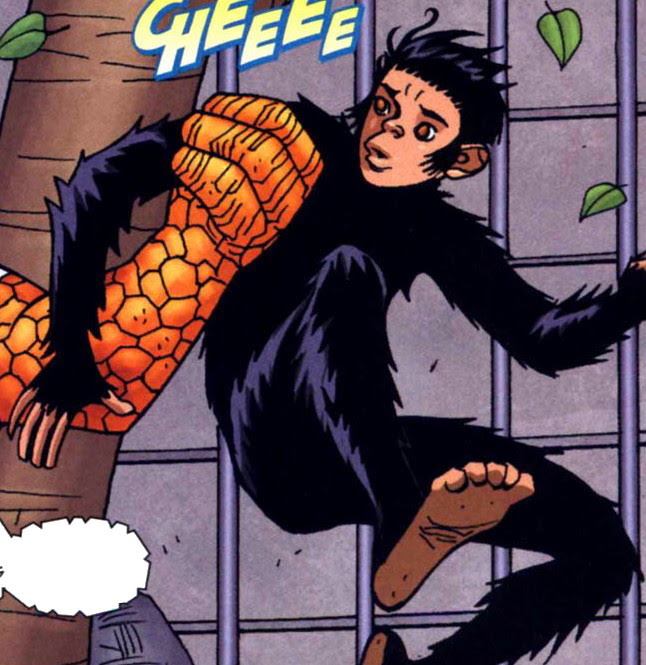 Who is Moon Boy?

Moon-Boy is a Marvel hero who is part of Devil Dinosaur's supporting cast of characters.  He is been described as both the first human and also as a mutant ancestor on an alien planet.

Moon-Boy comes from a tribe of fur covered ape people who call themselves the Small Folk.  The Small Folk are a hunter gatherer society that is at odds with another tribe called the Killer Folk. Moon-Boy comes across a war party of the Killer Folk who are brutally killing a family of Tyranasaurus Rex dinosaurs.  When the group attempts to burn one of the young T-Rexes it does not die but turns red.  Moon-Boy recovered this orphaned dinosaur and named him Devil.  Overtime, Moon-Boy learned that the fire had dramatically transformed Devil.  Devil had gained roughly the equivalent intelligence of a human, and was super strong and durable.

The Small Folk were not fond of Devil and so Moon-Boy and Devil found themselves ostracized.  They traveled throughout their world, times, and even to other planets.  Eventually, the pair would be brought to modern day Earth.  In modern, Earth the pair initially settled in the Savage Land that closely resembled their own prehistoric world.  The pair helped defend the Savage Land against the ever greedy Roxxon Oil Company.  Moon-Boy's fighting prowess greatly impressed the Savage Land's ruler, Ka Zar.

Moon-Boy was kidnapped by SHIELD who wanted to study him as he was the only specimen available of Homo Habilis.  This led Devil to become highly depressed to the point where some feared he may die.  Angered at the state of Devil Dinosaur, Stegron the Dinosaurman led an army of Dinosaur's against SHIELD in attempt to free Moon-Boy.  Stegron was repelled by the 50 state Initiative.  However, Reptil a member of the 50 State Initiative learned about Moon-Boy and was disgusted.  Reptil secretly freed Moon-Boy himself.

Moon-Boy is seemingly killed by a pack of Killer Folk.  He is attempting to keep a magical moon stone from the pack.  He dies as Devil Dinosaur and the Killer Folk are transported to Earth.  On Earth Devil befriends a girl named Lunella who becomes Moon-Girl.


Abilities / Powers:
Expert survivalist having grown up in a prehistoric world.
Can understand the language of Devil Dinosaur
His heavy fur makes clothing unnecessary

Moon-Boy has shown to be a relatively good fighter and problem solver.

Who is Devil Dinosaur?
Who is Moon-Girl?
Wolverine
Deadpool
Who is Captain America?
Who is the Black Panther?
Who is Doctor Strange?
Who is Hulk?
Who is Spider-Man?