Before you see Hateful Eight you should understand the how, the why of its filming.  In particular the plan for it to be shown on 70 mm film.

70 mm film (or 65 mm film) is a wide high-resolution film gauge for still and motion picture photography, with higher resolution than the standard 35 mm motion picture film format. As used in cameras, the film is 65 mm (2.6 in) wide. For projection, the original 65 mm film is printed on 70 mm (2.8 in) film. The additional 5 mm are for 4 magnetic strips holding six tracks of sound. Although later 70 mm prints use digital sound encoding, the vast majority of existing and surviving 70 mm prints predate this technology. Each frame is five perforations tall, with an aspect ratio of 2.20:1. The vast majority of cinemas are unable to handle 70 mm film, and so original 70 mm films are shown using either 35 mm prints in the regular CinemaScope/​Panavision aspect ratio of 2.35:1, or, in later years, by means of digital projectors at these venues.

Due to the high cost of 70 mm film and the expensive projection system and screen required to use the stock, distribution for films using the stock was limited, although this did not always hurt profits. Most 70 mm films were also re-released on 35mm film for a wider distribution after the initial debut of the film. South Pacific (1958), Lawrence of Arabia (1962), My Fair Lady (1964), and The Sound of Music (1965) are well-known films widely shown in 70 mm format with a general release in 35 mm format.

Edit
During the 1970s, use of 65 mm stock for original photography declined markedly. However 70 mm "blow-ups" of films made in 35 mm were sometimes made for prestige showings.[5] These included such films as Camelot (1967), Oliver! (1968), Cromwell (1970), and Fiddler on the Roof (1971). These enlargements did not have the sharpness and smoothness of 35 mm origination, but these larger prints allowed for a brighter image on very big screens and were more stable when projected. In addition 70 mm prints also had better sound quality than was possible from 35 mm. However these "blow-ups" rarely used the full six channels of the Todd-AO system and instead used the four-track mixes made for 35 mm prints, the additional half-left and half-right speakers of the Todd-AO layout being fed with a simple mix of the signals intended for the adjacent speakers (known as a "spread") or simply left blank.[6] However, if a 70mm film was shown in a Cinerama theatre, the Cinerama sound system was used. From 1976 onwards many 70 mm prints used Dolby noise reduction on the magnetic tracks but Dolby disapproved of the "spread" and instead re-allocated the 6 available tracks to provide for left, center and right screen channels, left and right surround channels plus a "low-frequency enhancement" channel to give more body to low-frequency bass.[7] This layout came to be known as "5.1" (the "point one" is the low-frequency enhancement channel) and was subsequently adopted for digital sound systems used with 35 mm.

In the 1980s the use of these "blow-ups" increased with large numbers of 70 mm prints being made of some blockbusters of the period such as the 125 70 mm prints made of The Empire Strikes Back (1980).[6] However the early 1990s saw the advent of digital sound systems (Dolby Digital, DTS and SDDS) for 35 mm prints which meant that 35 mm could finally match 70 mm for sound quality but at a far lower cost. Coupled with the rise of the multiplex cinema, which meant that audiences were increasingly seeing films on relatively small screens rather than the giant screens of the old "Picture Palaces", this meant that the expensive 70 mm format went out of favor again. The DTS digital sound-on-disc system was adapted for use with 70 mm film, thus saving the significant costs of magnetic striping, but this has not been enough to stop the decline, and 70 mm prints were rarely made.

In the late 20th century, the use of 65 mm negative film has also been drastically reduced, in part due to the high cost of 65 mm raw stock and processing. Some films from this period shot entirely on 65 mm stock are Kenneth Branagh's Hamlet (1996), Ron Fricke's Baraka (1992), and its sequel Samsara (2011), Paul Thomas Anderson's The Master (2012) and Quentin Tarantino's The Hateful Eight (2015). Other films used 65 mm cameras sparingly, for selected scenes or special effects. Films with limited 65 mm footage include Terrence Malick's The New World (2005) and Christopher Nolan's latest four movies, The Dark Knight (featured 28 minutes of IMAX footage), Inception,[8] The Dark Knight Rises (over an hour in IMAX) and Interstellar.

For home theater, VHS and DVD did not offer enough resolution to carry the full image quality captured by 70 mm film, and VHS and DVD video transfers were usually prepared from 35 mm reduction elements. The high-definition Blu-ray format, in contrast, can potentially reveal the quality advantage of 70 mm productions. Although telecine machines for 70 mm scanning are uncommon, high-resolution transfers from high-quality full-gauge elements can reveal impressive technical quality.

There are three types of digital cinema cameras with a 65 mm sensor, the Phantom 65, the Arri Alexa 65 and the forthcoming IMAX 2D Digital Camera. Otti International's Phil Kroll developed the world's first 65/70 mm telecine transfer system. This camera has been used in Hollywood to digitally master 70 and 65 mm films.

Since the 2010s most of the movie theaters across world have converted to digital projection systems largely eliminating 70mm film projectors.[9] 70mm has retained a niche market of amateurs and enthusiasts.

I find myself struggling to find a word. It rhymes with hung. It means being the opposite of right. What is that f-BEEP'in’ word? I am usually never...whatever that word is so, I have difficulty remembering it.

F-BEEP it! It'll come to me. As you all know, I was pretty much sh-BEEP'in’ all over the idea of a movie, in this day and age of everything instant, digital and 3-D, being released in 70mm. I thought to myself “Okay. Quentin Taratino has YET AGAIN, gotten a hold of some really good shit, smoked the entire bag by himself and just dragged this project along with him!” Quentin is an analog man living in a digital world. However, after seeing
THE HATEFUL EIGHT, I must admit, my mind was changed. 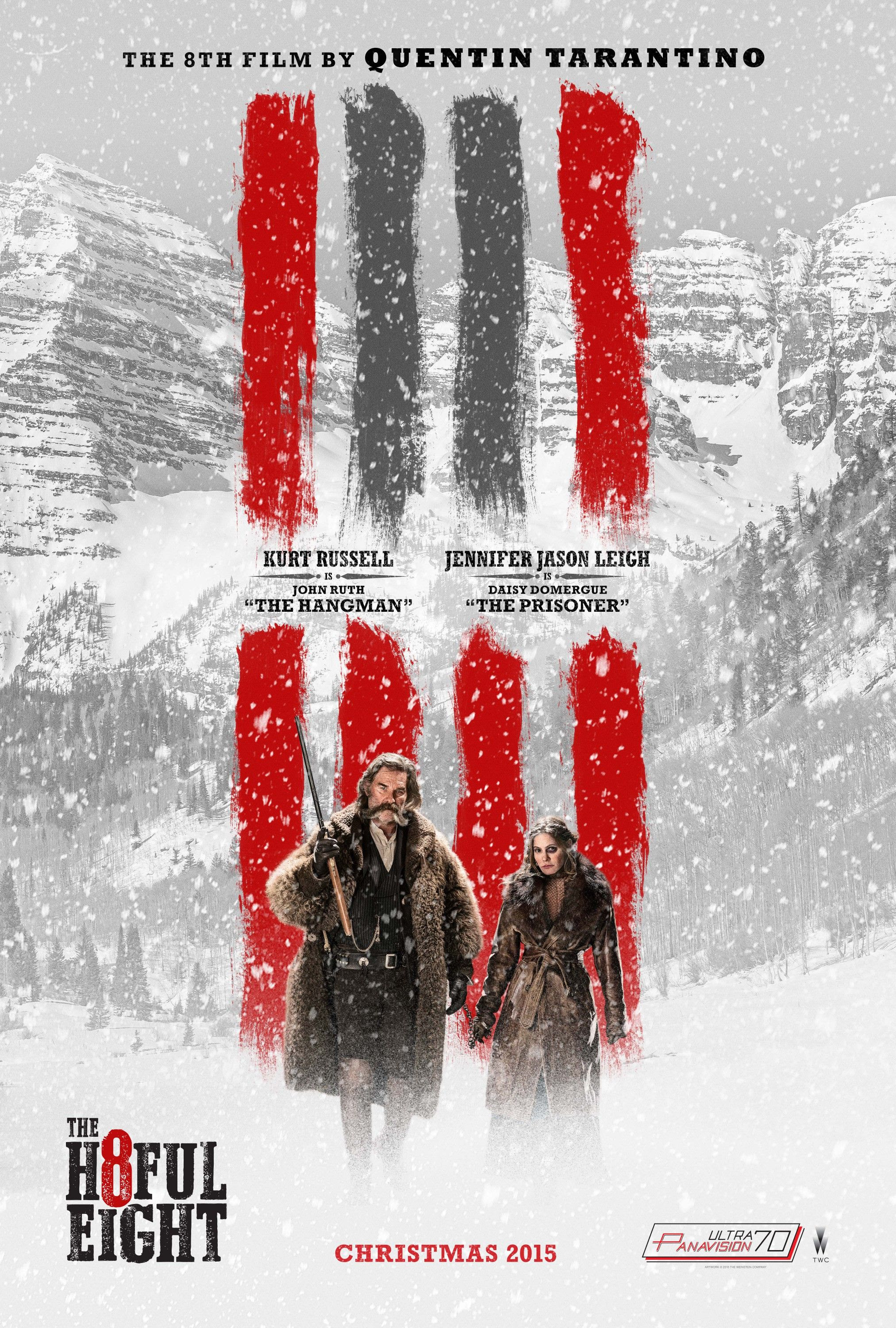 As out of date, antiquated and hella expensive as it is to do anything in 70mm, the depth, width and detail of the resulting affect of it is breath taking! You could actually feel the vastness of some of the scenes and at times, you cringed at the cold because of the effects of 70mm film tends to pull you in! Yup, I was definitely...whatever that word is, about 70mm film. Now, to my review. The
Hateful Eight revolves around John Ruth
(Kurt Russel who is enjoying a resurgence in his career and I say good for him).

Who is a well known bounty hunter and is transporting Daisey Domergue (Jennifer Jason Leigh) to a little town called Red Rock for execution via hanging. Along the way, they meet
Major Marquis Warren (Samuel L. Jackson) who is also a well known bounty hunter but has had some bad luck. His horse died while in the pursuit of two fugitives and is in need of a ride to avoid a horrible incoming storm. Through some convincing, Ruth allows Warren onto the carriage. Along the way, they meet yet another person stranded in the face of the storm.

Soon to be new sherrif of Red Rock, Chris Mannix (Walton Goggins) is also allowed into the carriage by Ruth but is disarmed because of his history. From this point on, the movie plays and feels like a “Who dunnit” mystery set in the old west and directed by Taratino. So of course there will be epic blood but the enjoyment of such carnage is the JOURNEY. I won't go into great detail but I have to mention that Channing Tatum plays Jody. Who actually turns out to be THE BRAINS of this operation!

Yup, I just said that. The guy who did
Jupiter Ascending and is working on the Gambit movie (Again WHY do we need this movie? Is Fox just hell bent on making sh-BEEP-tastic superhero movies?) Is the brains of a scheme in this movie! Taratino is a master of dialogue that captures you. It sparks qoutes that people use in everyday life and in this movie there are several.

Tim Roth (Oswaldo Mobray) and Bruce Dern (Gen. Sandy Smithers) both turn in stellar performance's. There is not a lack luster performance from anyone in the cast. I enjoy how Tarintino worked the fact that this is his eighth film into the title as well. Overall, I would give this film a 10 out of 10! However, if Tarintino is going to continue to shoot in this format, can he bring back intermissions and Bugs Bunny cartoons?

I f-BEEP'in miss me some
Bugs Bunny on the big screen!﻿ 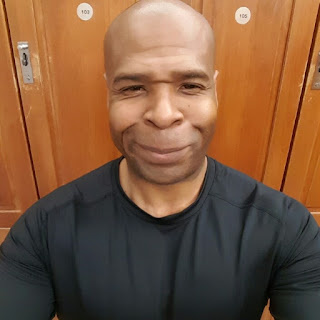