FROM THE VAULT: Thor #344 first appearance of Malekith 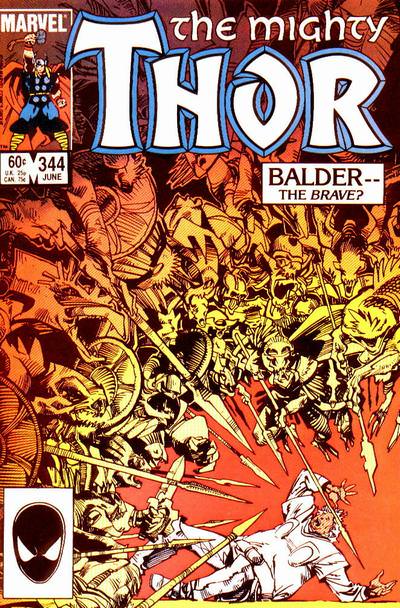 FROM THE VAULT:  Thor #344 first appearance of Malekith

One of the most legendary Thor writers is Walt Simonson who wrote about 50 Thor comics in the 80s.  His run on the series is considered one of popular among comic fans.  He wrote, and drew comics during this period.   Part of what added to the appeal of the Simonson stories were the inclusion and added depth the Asgardian cast of Thor.  Instead, of being focused on Thor a hero on Earth the stories began having a stronger connections to the Norse myths and related characters.  This included more focus on characters like the Warriors Three, Balder, Sif, Frigga, Odin, Loki and other mythological characters.  His run also began with some out of the box stories that included the Beta Ray Bill saga.

Thor #344 is toward the beginning of Simonson's run which begins on Thor #337.  The first 5 of his comics tell the famous Beta Ray Bill story.  Then there are a few one of tales including this one.

In #344 we have Simonson telling a classic Simonson tale.  The tale focuses on the Asgardian characters, introduces a new villain based off old myths and it is full of beautiful fantastical panels.  One more interesting about this story is that it almost entirely focuses on a quest of Balder.  Balder goes on an emotional and some might say tragic quest. Thor himself is barely mentioned at all.   The tale shows Thor briefly in human form where he avoids being poisoned by one of Lorelei's love potions by falling asleep.

The major cool event of Thor #344 is the first appearance of Malekith.  Here Simonson takes the old European myth of the Wild Hunt.  The Wild Hunt is a myth that appears in a variety of European traditions in which a male spirit, god or farie appears at the head of a group of ghost like hunters who go about causing chaos.  In Simonson's Thor he takes the Wild Hunt myth and creates a new character to put as its helm, the evil Malekith.   Malekith also uses the Svartalheim Dark Elves myths as part of his origins.  Malekith has become one of Thor's most iconic enemies and even appeared in the film Thor: The Dark World. 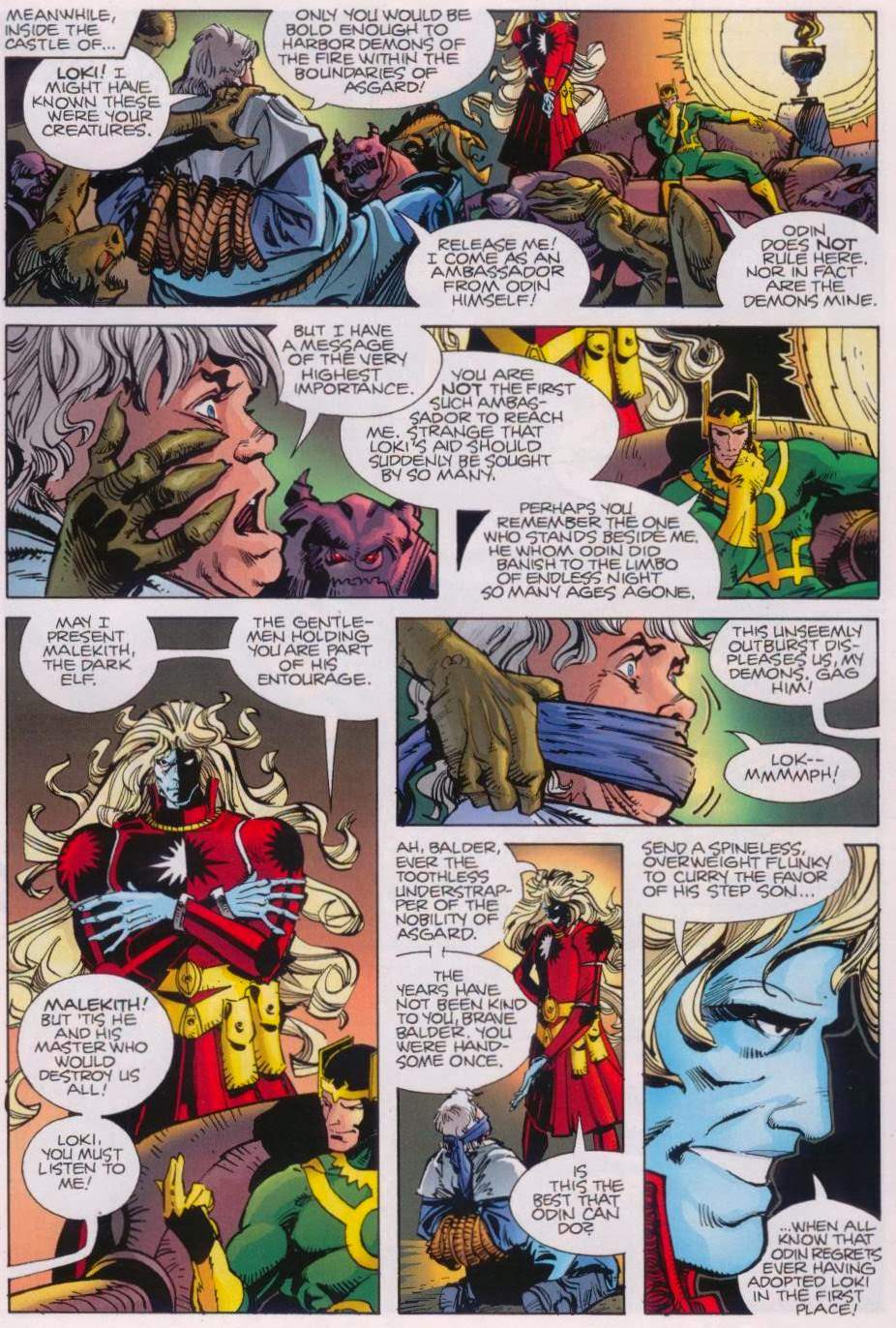 Balder the Asgard hero who is Thor's half brother is summoned to Odin.  Balder is being haunted by the ghost of all those he has killed which has led him to take a vow of pacifism.  Odin has grown worried due to a warning from one of his Ravens.  He requests Balder to deliver a message to Loki asking for his allegiance in a coming conflict.  Balder is reluctant to take upon this request because Loki had previously killed Balder and sent him to Hel.  In the end Balder relents to the All Father's request but on the condition that he won't kill anyone.

Meanwhile, on Earth Thor falls asleep as Lorelei gives him a back massage.  By falling asleep he avoids drinking a potion that Lorelei has poisoned.  This is a running gag through out Simonson's run.

Balder's quest begins as the hero charges ahead on his stallion Silverhoof.  He faces an avalanche, a living forest, and a sandstorm.  Surviving all of this he is then attacked by a demonic army who take him to Loki.  Loki as it turns out is with Malekith.  Malekith happens to be the threat that Odin is worried about.  Loki says he has already allied himself with Malekith making Balder's whole quest pointless.  Malekith orders the demons to kill Balder and then leaves with Loki. 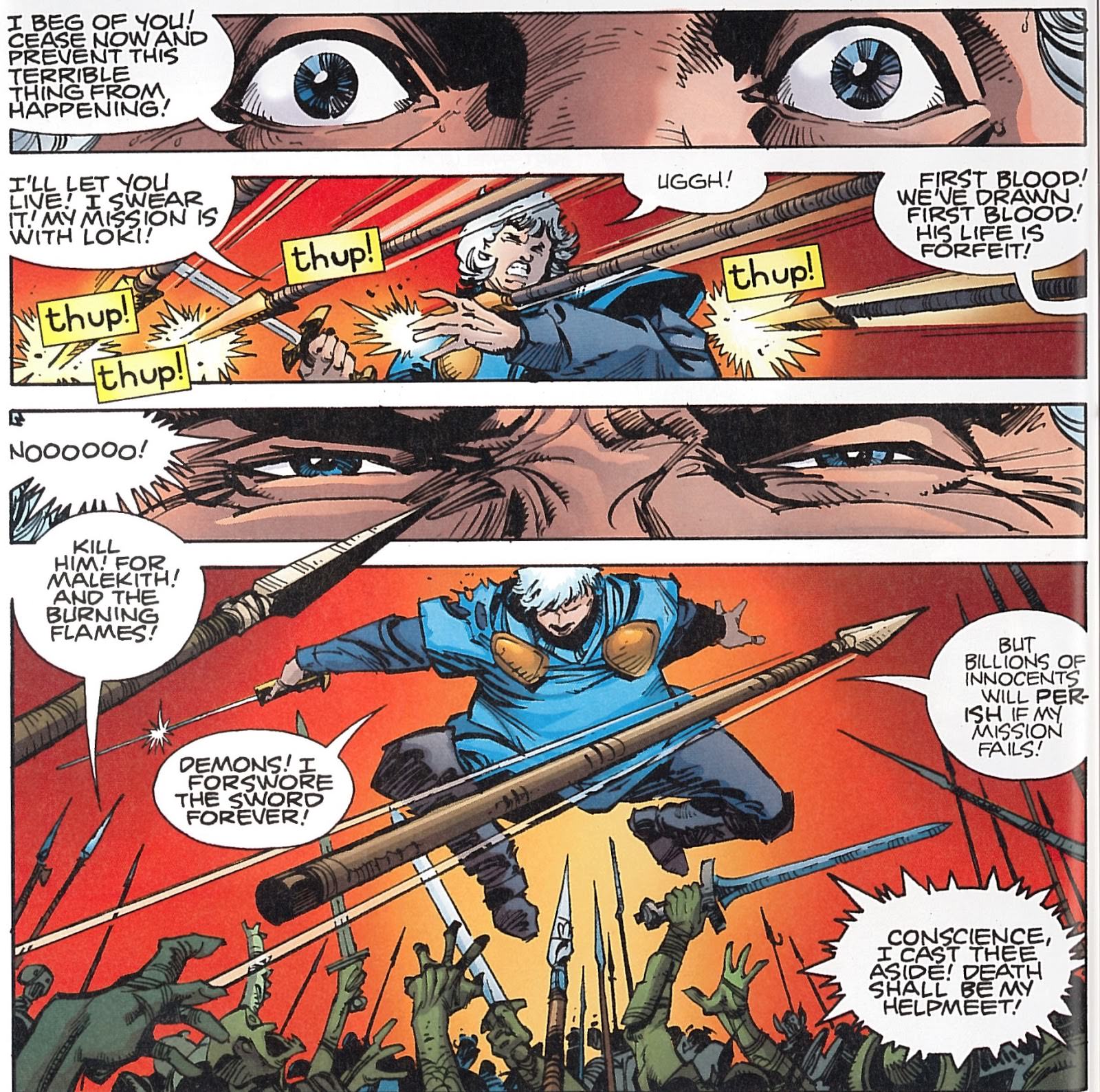 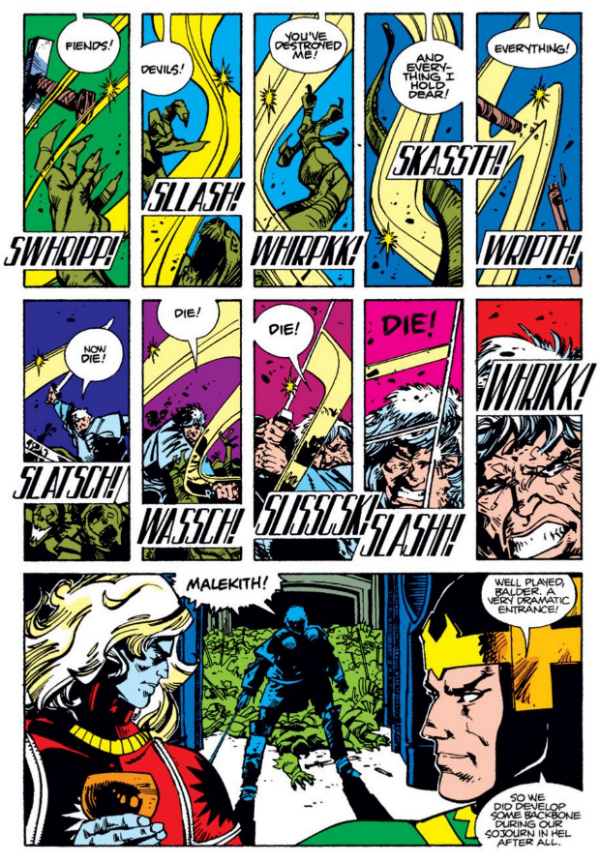 Balder confronted with overwhelming odds goes battle crazy.  He relents on his promise of pacifism and begins to slice every demon in his path to ribbons.  He then flies at Malekith in a rage.  However, before Balder can get hold of Malekith the wily faerie disappears.  Balder then completes his quest handing Odin's letter to Loki.  Loki snidely tosses the letter aside saying that he has already decided to be on Malekith's side in the coming war.    This infuriates the already angry Balder and he cuts off Loki's head.

Disgusted at himself, a saddened Balder leaves to seek out death.

Loki is shown picking up his head and putting it back on.  Apparently, his decapitation was some kind of illusion. Typical, Loki.

This is the bad ass story, of how Balder's pacificsm ends and the introduction of one of Thor greatest villains Malekith.  Altogether, Thor 344 is not only a first appearance book but also a great story with phenomenal art and story by the great Thor scribe Simonson.