Who is the Enchantress? 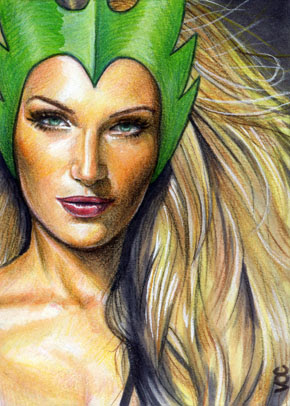 Who is the Enchantress?


Enchantress is an Asgardian Marvel villain.  The primary Asir/Asgardian hero in the Marvel universe is Thor, who is generally Amora's enemy.

Amora is a magical apprentice of the powerful Norn, Karnilla.  Karnilla kicks out Amora for lacking discipline.  Undeterred Amora begins to use her good looks and magical abilities to charm and seduce magical secrets from wizards and magi.  Eventually, she becomes one of the foremost magical users in all of Asgard.  Increasingly, power hungry Amora sets her sights on the conquest of Asgard.

Not a great warrior herself Amora has sought to manipulate, seduce, charm and control powerful warriors to fight for her cause.  These warriors have included Brunnhilda, Skurge the Executioner, Arkon, Loki, and even the mighty Thor himself!

Skurge the Executioner has been Amora's longest lasting and most frequent thrall of her seductive charm.  Thor has been a constant but highly elusive target of Amora.  She is often angered by her inability to control the thundergod.

Odin eventually exiles Amora from Asgard.  She returns to defend Asgard with her henchman Skurge the Executioner.  There she earns some temporary respect battling against Surtur and his hordes from Muspelheim.  During this time she has a relationship with Heimdall the guardian of the rainbow bridge.  She never stops scheming though and is constantly looking to further her own ends.  One of her schemes includes forcing her sister Lorelei to fall in love with Loki.

Amora finally gets the long sought affection of Thor when he feels pity for her.  The Executioner nobly sacrifices himself in part to escape the control of Amora.  Amora finds that she deeply cared about her enthralled warrior despite her poor treatment of him.  While grieving for him she find herself in the arms of Thor.  The two begin a relationship that lasts a short while.  When Thor is missing to after battling Onslaught, Amora even plays the hero and defeats the evil Set.  During Ragnarok, Amora is killed along with the other Asgardians.  This is the end of Thor and Amora's relationship.

Thor is revived and begins to find and awaken the other gods.  He is initially hesitant to waken many of the troublesome Asgardians, including Amora.  However, Loki tricks him into awakening all of them.

When revived Amora does not return to Asgard and is overwhelmed with loneliness.  Her initial action was to attempt to free Skurge the Executioner from Valhalla but she is convinced by Loki, Balder, and Thor that this would have dire ramifications for the nine worlds and relents.  Still lonely she seeks out a new confidant.

Amora finds Donald Blake who is desperate to gain the powers of a god again.  She tricks him to eating a Golden Apple and then cuts off his head.  From his blood grows a massive monstrous warrior called Keep. Keep becomes Amora's new thrall.  The pair are defeated and banished from Asgard.

Being Asgardian she is far stronger, faster, and more durable than a normal human.  She also ages much slower and can live for thousands of years.

Magic:
Enchantress is one of the most powerful and knowledgeable magic users in the Marvel universe.  She has been trained by the infamous Norn Karnilla before studying under various magi and wizards whom she seduced.  Her magical skills are thought to be on par with that of Loki.  Her magic powers are tethered to the realm of Asgard and can weaken


MCU:
The Enchantress has not yet appeared in the MCU