Who is Darth Tenebrous?

Who is Darth Tenebrous?

Darth Tenebrous is a Sith Lord famous for training Darth Plageuis and for initiating a plan that led to the creation of Anakin Skywalker.  He was obsessed with immortality and shaping the future toward the darkside.  Much of plans for the Empire began with Tenebrous.

Canon: It is unknown of Tenebrous is within the canon of the Star Wars ongoing continuity.  While Plagueis is mentioned in Episode III, Tenebrous is not.


Darth Tenebrous Bio:
Rugess Nome was a famous starship designer and scientist before meeting a Sith lord.  It is thought that Tenebrous was not as biologically adept at the force as many other Sith but was selected due to his scientific acumen.  Eventually, he would take on the mantle of Darth Tenebrous.  Even while acting as a Sith Lord he maintained his persona as ship designer which gave him access to many nodes of power within the galaxy.

Darth Tenebrous served the beneath a mysterious Twi'lek Sith Lord.  This Sith Lord worked on what he called a grand plan that was to construct a virus that would block Jedi's connection to the force.    This plan ended in failure and eventually Tenebrous slew his master when he felt he had learned everything his master knew. 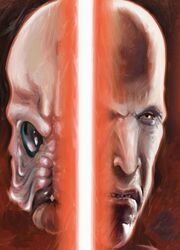 On his own Tenebrous began to create a new darkside philosophy where it was seen scientifically as an energy source as opposed to a force of moral malevolence. Tenebrous was always very forward looking and so planned the birth of his first apprentice by manipulating a man to meeting his future wife.  The pairing Tenebrous had calculated would result in the creation of a child powerful in the force.  When the child, Hego Damask turned 5 he went to live with Darth Tenebrous.  Hego Damask became his apprentice and took on the mantle of Darth Plagueis.

Tenebrous began to work on a grand plan of his own design.  He and Plagueis began to study the genetics that led to one being powerful with the force.  They began conducting experiments where areas were bombarded with force inducing energy that was meant to create powerful force users.  Tenebrous also studied how to move his mind between bodies with his end goal being to create a powerful chosen one, whose body he could take for his own and live forever in.

Tenebrous begins to view Plagueis as intelligent but weak.  He begins to train a young Bith in the ways of the force behind Plagueis's back named DarthVenamis.    He delegates the research aspects of his plan to Plagueis, while training the other apprentice in combat.  Little does he know that Plagueis is also studying other force powers behind his Masters back.  Tenebrous foresaw his own death at the hands of Plagueis but created a countermeasure.  In his mind and force abilities would move into Plagueis and slowly take control of his apprentice's power of foresight and take him over.  While this does happen Tenebrous is horrified to learn that Plagueis own death is near and that he will never be able to move his body into the chose one.  This horror causes to Tenebrous to flee the body of his apprentice and become trapped in the corpse body of his mummy...possibly forever.

Star Wars Speculation:
Could Darth Tenebrous be Lord Snoke?  Tenebrous was obsessed with immortality and had found the means of moving his mind through a virus between bodies.  It is suggested that his mind never infact died but became trapped in his original corpse.  It is possible that after a time his mind gave up on the idea of taking over the chosen one (Anakin Skywalker) and instead began to rebuild his damaged corpse.  This could the simultaneous vast knowledge and great weakness of Supreme Leader Snoke.

One reason this theory is weak is that Snoke does not appear to be a Bith.  However, Tenebrous was capable of moving his mind between bodies he may have found a body of another species weak enough for him to control. Who is Kylo Ren?
Who is General Hux?
Who is Finn?
Who is Rey?
Who is Supreme Leader Snoke?
Who is Captain Phasma?
What is the First Order?
Who is Maz Kanata?
Who is Darth Venamis?
on October 16, 2018