Opening...
Google notifications
All caught up!

jacks garnier and 5 others
+1'd: What to get your Geek for Christmas 2014- Agents of SHIELD edition

jacks garnier and many others
Commented on, +1'd: Anyone else get #Antman this #Christmas?

Ugo Ano and Lionel Humphreys
+1'd: Star Wars on piano by ear through +Google Glass​ ... It was inevitable

Clément Vigor and 7 others
Mentioned you, Commented on, +1'd, +1'd your comment: Anyone else think that Oscar Isaacs was great in Star Wars? Makes me optimistic about his portrayal of Apocalypse.

Guardians Of The Galaxy Community
Leonard Sultana and 3 others posted

Sir Kent
Shared with you, Mentioned you: Did you get my review yet? I have more time today. I'm going to see how easy it is to add it to the site myself

Herbert Rabua and many others
+1'd: #MerryChristmas #America

NYHC COMICS
+1'd many of your posts

Sir Kent
Shared with you: I just sent you my review for Star Wars. I will let you check it out and post it on the website

Sir Kent
Shared with you: Way back in May 1977 the original STAR WARS was released. I was all of 9 years old and being introduced to a story, a vision from director George Lucas. Who up until that point, had been known for a

Clément Vigor and 5 others
+1'd: A Merry Gotham Christmas!

Joseph Mendez
Shared with you: Oh my goodness!!!... It the real poketree

Hector Ramirez
+1'd many of your posts

Wilfred B and 4 others
Commented on, +1'd, +1'd your comment: Star Trek: Beyond Trailer A few things to note on this outing of the Enterprise.  First, it seems to have a lighter tone and also to have upped the action even more.  On one hand this trailer looks

Joseph Mendez and 7 others
Commented on, +1'd: Merry Christmas or should I say...Sweet Christmas

Joseph Mendez and 4 others
+1'd: What to get your Geek for Christmas 2014 - Zombie Fan edition

Joseph Mendez and 3 others
+1'd: What to get your geek for Christmas: Spider-Man Edition

Hulk (Marvel)
Shahdad Soltanpoor and 7 others asked to join

Way back in May 1977 the original STAR WARS was released. I was all of 9 years old and being introduced to a story, a vision from director
George Lucas. Who up until that point, had been known for a series of “Short” films. Films such as HERBIE (1966), ELECTRONIC LABYRINTH (1967) and AMERICAN GRAFFITI (1976). Not a short but also not a movie we would have tied to a guy who created the...dare I say it...EMPIRE we know today.

I was rocking an afro, maybe cornrows then and “White Flight” from the city was still fresh on everybody's mind even 9 years later. Yet this movie, this shiny new look at the future, seemed to bridge a lot of gaps. For at least 3 hours, people could come together and have their collective minds blown by C.G. of the day. I wonder, in some part of his mind, if Spielberg wasn't going for that when he started this intergalactic trip? This space odyssey that defined the genre and made an undeniable mark on pop-culture and history?
Who knows? Maybe he was just smoking some really good BEEP! but whatever it was that motivated him to write and direct this, we are all grateful. I will try and keep this review as “Spoiler Free” as I possibly can. However, if I do slip up, the question begs, why the BEEP haven't you seen it yet, Dumbass? The movie opens as it normally does and that crawl tells the tale. 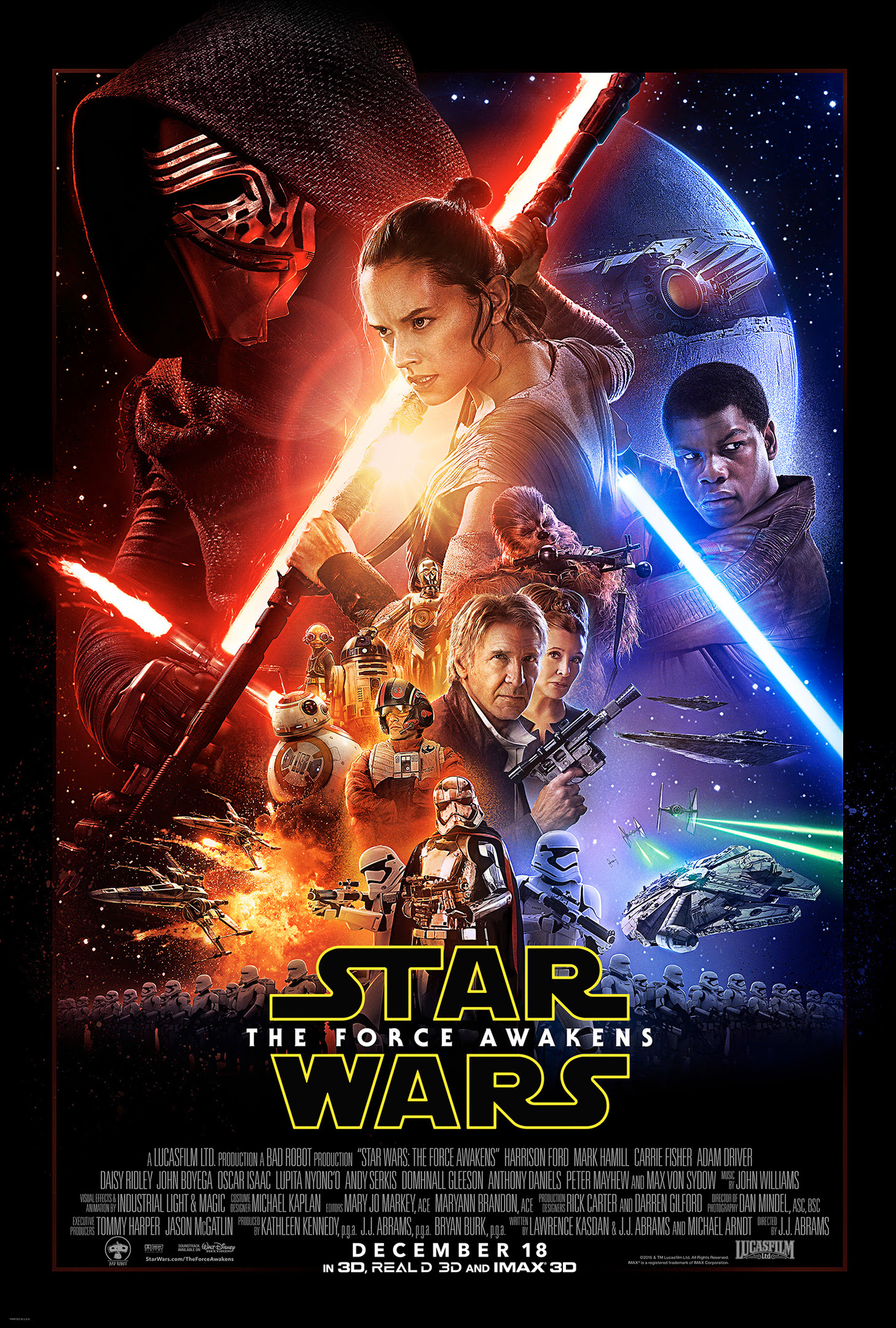 Luke Skywalker (Mark Hamill) has gone into hiding after his nephew, Kylo Ren goes bat-BEEP crazy, is corrupted by the Dark Side and nearly wipes out the ENTIRE Jedi Order in the process. Oh, did I mention, he becomes
Kylo Renas well? Yup.
As a guy, ain't we all been there? Luke is so overcome with guilt that he removes himself and allows the events to unfold that bring us to this chapter. There is no balance in The Force. This new FIRST ORDER is hell bent on picking up where the old Sith Lord's left off. Left unchecked or unchallenged three decades after the defeat of the Galactic Empire, their control has increased to mirror that of the Empire of old.

(Yes, bitch’s! I am going to use “Empire” as much as possible!). Lead by Kylo Ren (Adam Driver) who is the son of Han Solo (Harrison Ford) and
Princess Leia (Carrie Fisher) he seeks to find and kill Skywalker who he and the new
Supreme Leader (Andy Sirkis) both consider a threat. A threat because, if he were to ever return, he could inspire new people who have The Force within them to rise up and restore balance to the galaxy. Enter the “Meet Queue” between a talented pilot for the resistance Poe Dameron (Oscar Issac) and a Stormtrooper Finn
(John Boyega) who finds himself struggling with his conscious of late. They share an instant “Brothers in arms” feel that is felt and appreciated throughout the crowd in the theater.
After a daring escape, they find themselves separated on a desert planet that shows the scars of the Wars of the old Empire (Told ya’). As in many of its inhabitants spend their days savaging through the ancient husk's of Imperial Walkers and battle cruiser's. Rey (Daisy Ridley) is one of these people. She was abandoned by her parents and spends her days savaging and her nights counting the days since her parents left. The “Meet Queue” between Rey and Finn is comical and cute.

This movie is a reintroduction to the generation that may not have been around in the late 70’s (And I know there are a LOT of you!). It is reimagined by the very passionate J.J. Abrahams who was driven and dedicated to not only laying respect to the original but, breathing life into a new set of movies that could stand in their own. He wanted to showcase how the original actors have grown and say goodbye to a few. At the end of this review, I can't make the generation that got to know STAR WARS with BEEP'in’ Jar-Jar Binks in it feel the way I did with the original. Hell, I can't even make you feel the way I did with the two after that.

All I can say is that this movie is as seamless a continuation on the original as anybody could ask. If you are not familiar with them, I totally encourage you to rent and watch them digitally. As far as this movie, I can only give it a 10 out of 10!


Sir Kent Toylab Store:
Toylab is a member of the Amazon affiliate program and is happy to bring you these great deals recommended for you by Amazon.