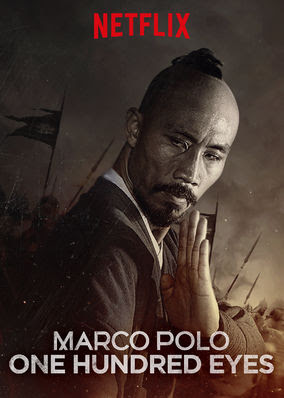 If you haven't seen the series Marco Polo be warned SPOILERS!!!

I think in our unbridled passion for the MCU/NETFLIX collaboration on the DAREDEVIL and JESSICA JONES, I think we had forgotten about another Netflix made series that is deserving of just as much fanfare. MARCO POLO was released in late 2014 and was a military drama that told the exploits of Kublai Khan (Benedict Wong). The grandson and greatest successor of Genghis Khan. There are many reasons to enjoy this series. Be it his wife, Empress Chabi who is in charge of picking out the concubines who will pleasure the Great Khan (I'm thinking that's gotta suck for a wife!).

Or one of his most trusted advisors Ahmad (Mahesh Jadu) plotting to behead him who joins forces with a concubine sent by Jia Sidao (Chin Han) to try and assassinate the
Great Khan. All of these subplots make for great watching but for me, the stand out in the entire series was
ONE HUNDRED EYES (Tom Wu). Netflix obviously agrees because they dedicated a short, 30 minute episode to tell the story of how this warrior monk came to be in the service of the Great Khan. I think if Samuel L. Jackson were to see this guy, he would definitely call him a “Bad ass muthufucka!”. For even though blinded on order's of the Great Khan, he still manages to kill Jia Sidao with the mantas technique that he had only been exposed to once!

I did mention that he is blind and beat Sidao with a technique that HE created! Ain't that a bitch?!?! I think even more fascinating than this is how and why One Hundred Eyes was blinded in the first place. One Hundred Eyes was a monk at a monastery bordering the warring states of China and
The Mongolian Empire. Like any monk would, they rendered aid to wounded warriors from China.

This enraged the Great Khan and he sent men to the temple to kill anyone there and burn the temple to the ground. The men were met by a single monk and 25 of them fell to his righteousness. He was captured but not killed. Instead he was brought before the Great Khan who asked him how he was able to kill that many men by himself? He replied not only in a disrespectful, taunting tone. When threatened by the Great Khan he replied, very defiantly “Life and death are the same thread”.

Realizing that not only was this warrior monk of too great a value to simply kill but him not having a fear of death vexed the Great Khan. He ordered that the monk be blindfolded and forced to fight. During which, the monk killed everyone in that room, including the general son of an emperor ally. This could not go unpunished but once again, Khan couldn't simply kill the monk. He devised a way of punishing him without killing and possibly forcing him to do his bidding.

He ordered the monk to be blinded using the venom of a spitting viper. The last sight the monk ever saw was this cobra being raised out of a basket and aimed at his face. However blinding him was only a first move for Khan. For despite that, the monk, through his believes, his lifelong dedication to his fighting style or sheer will, seemed to prosper WITHOUT his eyes! So Khan was left with only one option.

Either One Hundred Eyes would train his officers in his kind of kung-fu or, Khan would order the destruction of the last monastery and everything within it. The monks entire history and people would be wiped out. Having been shot and having to relearn to do basic things like, tying my shoes, buttoning my shirts, using flatware or how to throw a punch with a hand that is filled with surgical steel, pins and buckshot, I identify with this deeply. “Life and death are the same thread”. Our lives are but a star in the infinite space (Just made that up. Feel free to quote me).

One Hundred Eyes is fascinating to me in this series because with all of this insanity going on around him, he has still managed to hold on to the person he was before he was caught. He gives himself to the service of the Khan because it is not TO HIM. It's to the people he wishes to protect. That's some otherworldly deep kinda shit there bitchs! If you haven't watched MARCO POLO: ONE HUNDRED EYES or the series MARCO POLO, knock that shit out tonight after the game's﻿