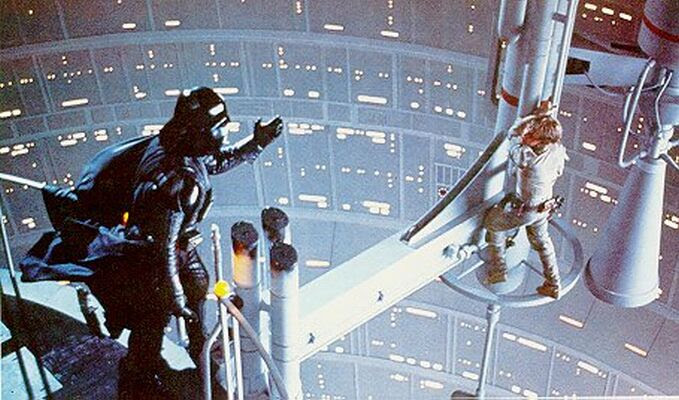 I am your Father

Star Wars is back on the forefront of everyone's minds and many are being introduced to the first films for the very first time.  One thing that has been carefully considered by many fans is the appropriate order of watching the films.  The one juggernaut consideration is that the main reveal of all the films is Luke parentage, and that reveal is ruined if you watch the prequels first.

The reveal  of Luke parentage shocked theatergoers at the time and has helped earn the film Empire Strikes back the highest critical praise of all Star Wars films.


The sad thing about a reveal like this is that after you know it, it loses some of its power.  However, we can still see the shock, and confusion on the faces of those watching it for the first time.  It is an amazing to watch really because it is so well done.  It is one reason why I favor the Machette order of watching all of the Star Wars films:

This thing about watching the films is in this order is two fold.  First the parentage of Luke is kept a secret until the big reveal in Empire Strikes Back rather than being ruined non dramatically in the prequels.  The other big thing it does is end the whole series on a light note that is Return of the Jedi.  The Skywalker darkside curse is broken by Luke and Anakin is redeemed.  You also get to see the Empire both be created, and finally crushed.

This includes all of the films and while Phantom Menace is some what filler it does feel like the very beginning of the question that looms after Empire Strikes back, Who is Darth Vader, and Who is the Empire.  None of this denies the multitude of issues that exist in Phantom Menace but I still feel you miss out on Darth Maul and his double bladed lightsaber if you skip it.  Yes, Darth Maul dies before he really has any meaning but he was so much cooler than everyone else introduced.  The scene where Darth Maul pulls out his lightsaber and ignites both ends is still one of the top moments in all of the prequels.

Those are my thoughts on the issue.   All thats left is for you to make some popcorn and sit down for a fun science fiction journey into the stars.

Who is Finn?
Who is Rey?
Who is Captain Phasma?
What is the First Order?