Who is Sana "Solo" Starros from Star Wars?

Who is Sana Solo from Star Wars?

Sana Solo is character introduced in Marvel's 2015 reboot of Star Wars.  Done with the oversight of Disney the comics use characters that are in the canon of the company's future plans of the series.


"I've got you now, you sorry son of a bantha."
―Sana, after tracking Han Solo to the Monsua Nebula

Han Solo Store:
Looking for cool products from Star Wars.  Sana does not have much products in her name yet unfortunetly but Han Solo does.  We have found the coolest Han Solo products at the best value on Amazon and put the links directly below for your convenience.  As an Amazon Affiliate we are able to link our site directly to Amazon so our readers can go directly to the biggest retailer on the web. 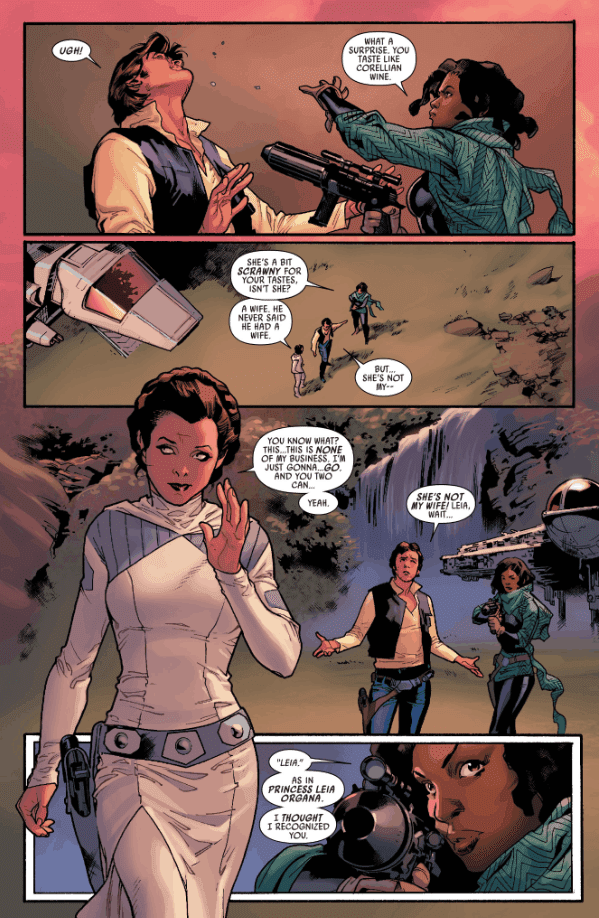 Sana is a bounty hunter who claims to be the wife of Han Solo.  This is a claim that Han himself denies.  She also claims that Han's infamous Kessel Run record was done on her ship and not the Millennium Falcon.

For unclear reasons she sets out to locate Han after the destruction of the first Deathstar.  At the time she does not know that Han had taken part in the Deathstar's destruction or joined the rebellion.  She tracks down the Milenium Falcon to Mos Eisely where she puts out word that she is looking for Han Solo.  She is attacked by a group of Rodian who are mad at the death of their fellow Rodian, Greedo.  She blasts the group back with hidden self targeting scatterblasters hidden beneath her table.

Sana then tracks down Solo in the Moddell Sector.  Han  is on a mission with Princess Leia to find a suitable replacement base to Yavin 4.  Han and Leia are set upon by an Imperial Star Destroyer and so enter into the Monsua Nebula to escape.  They land their Lamda class shuttle onto a planet.  Han claims he is the only person who knows of the planets existence.  However they are quickly confronted by Sana.  Sana claims to be Han's wife and slaps him for smelling like wine. She also says the planet is known to her because it is where she and Han used to rendezvous.
Leia says whats going on is none of her business.  However, seeing who Leia is Sana wants to give the princess to the Imperials to collect the bounty.  She is dismayed when she learns that Han has also joined the rebellion.  Instead, the three escape using Sana's ship.

It is still not clear what reason Sana has for hunting down Solo.  After the escape Leia recieves a message that Luke has been captured on Nar Shadda.  Sana agrees to take Leia to Nar Shadda on the condition that she gets to keep Han.

Once on Nar Shada, the group attacks an Arena where Luke is fighting.  During the battle,  Sana finds herself stuck and is saved by Leia and she reveals that she is infact not the wife of Han Solo.  She says her name is Sana Starros.


She reveals that the marriage to Han Solo was part of a sham that the two were using for a heist.  However, after the heist was complete Han had run off with her cut.  She then had been hunting Han down.  The two had been romantically involved however.  Han convinces Sana that he is now part of the Rebel Alliance and to let Princess Leia and himself go.  She helps them escape the closing Imperial Forces. 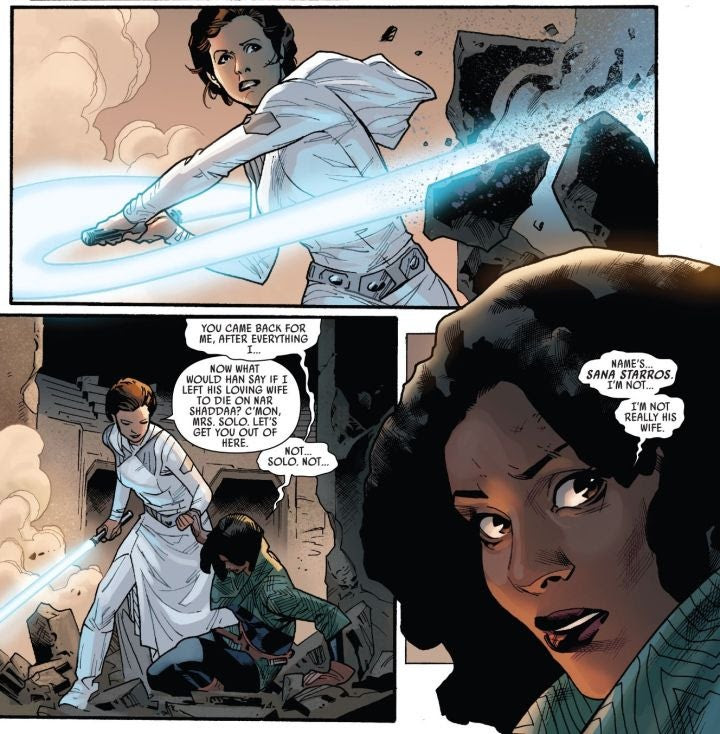 Force Awakens Theory:
Finn one of the new characters in Force Awakens has an unrevealed surname.  This leads many to believe that he is some how related to someone from the original films.
It is possible that Finn is the offspring of Han and Sana Solo or Sana and another man.