FROM THE VAULT: MoonGirl and Devil Dinosaur 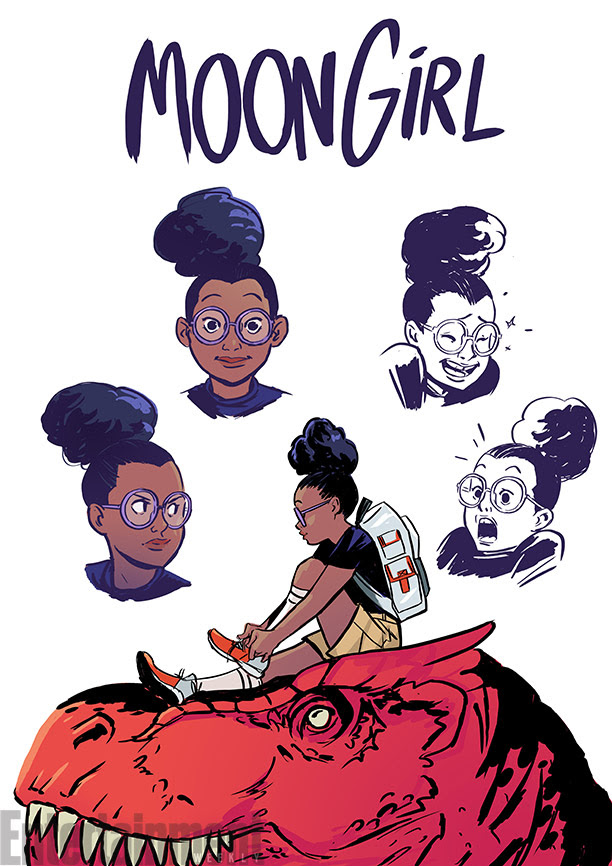 MoonGirl and Devil Dinosaur #1
This is a new comic but is pretty special so it is definitely going into the Vault very soon!

As a parent of young girls I really appreciated this story.  It has a girl who idolizes astronauts and scientists as opposed to fashion designers.  While there is nothing wrong with having female characters have stereotypical female interests, its very limiting when that is all that there is.  Lunella is really a breath of fresh air in this department and shows that it is ok for girls to like science, academics or really just about anything.  Once a wall of any kind is broken down, its broken down all around.  A girl who likes cars, a boy who likes barbies, its all more ok when kids read about Lunella.

The impact of who Lunella is really hits you on the first panel in the book when you see her room.  Her room is covered in posters and devices of science, and astronomical interests as opposed to rock bands or super models.

If you critique book #1 it is that it takes awhile for the two titular heroes to get together.  It does not happen until the end.  However, the introductions of both of the characters is very solid.  The series feels like it is set from this issue for delightful run.


More Old Comic Fun!
The Toylab Vault - Full of special comics
Who is Devil Dinosaur?
Who is Moon Girl?


Why is Moon Girl and Devil Dinosaur #1 cool?

The story is history making in both the type of story being told, and also who its being told with.  It also is the First appearance of Lunella Lafayette aka Moon Girl and also includes the apparent death of Moon-Boy. Both the first appearance and the death make the book notable by themselves.  However, the book stands out for other reasons.

Moon Girl and Devil Dinosaur is very a direct action taken by Marvel to reach out and tell stories designed for females, youths, and minorities.   While, Marvel has had female and minority characters Lunella feels specifically designed for females to read.  She is not a curvaceous, model prancing about in a skin tight spandex outfit. She also does not possess a super power but relies on her witts.  She might be described as a bit of a nerd, but she is also heroic in her own unique way.  In many ways she is a female version of Peter Parker.

The comic also has a Pixar like fun, young quality that makes it suitable for readers of all ages something that Marvel does not have a lot of.

Who is Devil Dinosaur?
Who is Moon Girl?

DISCLAIMER: This article was submitted by a volunteer contributor who has agreed to our code of conduct. Toylab is protected from liability under the Digital Millennium Copyright Act (DMCA) and "safe harbor" provisions. Toylab will disable users who knowingly commit plagiarism, piracy, trademark or copyright infringement. Please contact us at ToylabHQ@gmail for expeditious removal of copyrighted/trademarked content. You may also learn more about our copyright and trademark policies.
on January 03, 2017