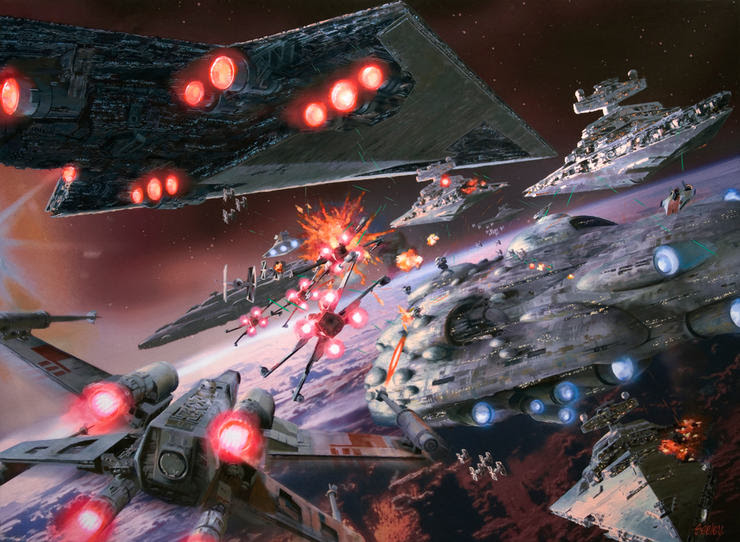 Star Wars Armada is a big game with lots of depth and interesting rules.  To me it does not quite play like anything else out there.  There have been a few dogfighting style games like Armada's sister game X-Wing but Armada has a very different feel. In X-Wings curve, and twist in barrell rolls to avoid attacks or land them.  Armada the ships move and turn slower.  In X-Wing you move your ship that turn very much by what is in front of you.  In Armada you must plan out your moves very much in advance.  In a sense the two games are a bit like Checkers and Chess.

One thing I recommend is to check out online battle reports from other players.  These battle reports show gamers playing different scenarios of the game and can really help you figure out the rules and flow of the game.  With Armada these videos are even more important because the game has a significant upfront cost and you don't want to get into it and not like it.  If you already have the game it helps you also develop your own tactics and fleet builds.

Allen Lancing Battle Report:
This is a fun game to watch it features 300 point fleets which are quite large.  The number of ships in play here is massive.  The guys do a good job of explaining rules, and also tactics as they are playing.


WW40k Battle Report
This battle features a Rebel Fleet ambushing a Victory Class Destroyer and a Gladiator Destroyer charging in as a reinforcement. This game uses a lot of Wave 2 ships and gives you a feel of what they can do. There is also a great tactical discussion and after the game. The focus is more on the Imperial side but should be interesting for both types of players.


Another Battle Report by WW40K features pretty much his same Fleet in the scenario above but against another Imperial Fleet.