When Luke Skywalker did not appear in the poster for Star Wars: The Force Awakens people went nuts.  Where is Luke?  Then people began to ask, what if Luke is Kylo Ren?

I have looked at a lot of Star Wars rumors, and read all of kinds of things.  I do not think Luke is Kylo Ren, however I do think it is possible that Luke is now evil.

While Luke did not seem evil in Force Awakens and the bad guys seem to be afraid of Luke could there be more to it?  Could Luke represent a different kind of Dark Side?

There are definetly a few items that are appearing in current Marvel/Star Wars comics that are dropping hints about Luke.  One is the force trees he finds in the star wars comics, the other is the current series of Darth Vader that is focusing on the Kyber crystal of Darth Vader.


Update:
Funko just released its first image of Luke as a Funko Pop is it possible that he is now evil?  Well he is wearing a red Kyber crystal that is often associated with the Dark Side of the Force.

I think this crystal is the Kyber crstal of Darth Vader.  From the current series in Darth Vader (See Darth Vader #4-5 2017) Vader is tasked at getting a crystal from a Jedi he slays.  He chooses to target one of the most powerful Jedi he can find Kirak Infil'a. This story is not finished yet but it seems likely that  Darth Vader's saber is fashioned after this crystal.  This could point toward Luke not being light or dark but rather a kind of grayish force user.

That said there is more evidence that he is a full on dark side user.  Keep reading about the importance of the Force Trees. 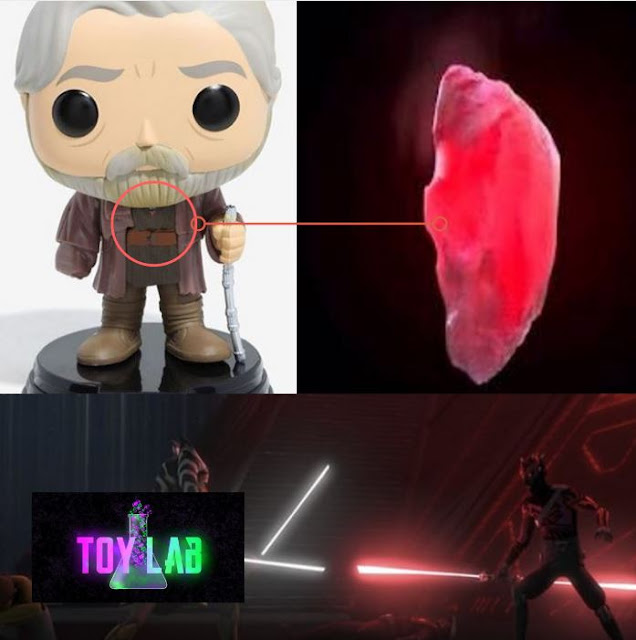 Luke is Evil Theory:
The Luke is evil theory does have more legs than him simply being Kylo Ren.  Hamill himself pitched the idea of an Luke to JJ Abrams.


It all about dem trees!
Now we are going to talk about trees.  Yes Trees!


@recordnj 2 trees from jedi temple. Dameron has 1, Luke the other could one lead to new dark the light groups? https://t.co/KxCqBAnIwo
— Toylab (@ToylabHQ) October 23, 2015

Another piece of evidence comes from the comic Shattered Empire.  I mention the series in the post about Poe Dameron.


This series really is the last place chronologically where we see Luke in a story that legitimately ties into Star Wars: The Force Awakens.  This is Luke in action post Return of the Jedi.  Here Luke along with Poe Dameron's mother Shara Bey break into an Imperial facility to steal two trees.  These trees are revealed to be the trees from the Jedi Temple at Coruscant.  They were deemed important by Palpatine and thus preserved.  Luke himself states that the Force is in the trees.

Luke says that his meeting with Shara Bey is not a coincidence that they were brought together by the force here to do something important.  At the end of the series:

One tree is taken by Shara Bey and planted at her home where Poe Dameron grows up.

The other tree is taken by Luke.  Most presume he is going to use it to restart the Jedi Order,

If the tree planted at Dameron's home is serving the lightside, then Luke's tree is now serving the darkside.

The Knights of Ren in many ways seem to be the most organized and knowledgeable Force using characters.  Why is this?  Luke was the only Jedi left standing in Return of the Jedi.   If he recreated the Jedi Order then where are they?  It seems increasingly plausible that whatever he created, for whatever reason became the Knights of Ren.

Who is Luke Skywalker?  Is he Ren?  Is he Supreme Leader Snoke?  Or is he simply Luke Skywalker but ......bad.  I'm not sure.  It does however seem plausible that he is not good.