Iron Fist is a hero in the Marvel universe known for practicing Kung Fu.  Iron Fist is a mantle that has been worn by many men over the ages the modern day hero is Danny Rand.  Iron Fist  appears in a Marvel Netflix series.  The first season was met with mixed reviews however the 2nd season released on Sep 7, 2018 has had much more positive reviews.  Casting:  Danny Rand is listed as being played by  Game of Thrones actor Finn Jones.  Finn is most known for playing Lords Tyrrell in Game of Thrones.

The Iron Fist is the selected champion of the mystical city of Kun Lun.  The modern version of the character is named Danny Rand.

Danny Rand is born in NYC.  At the age of  9 he accompanies his father Wendell, mother Heather, and his father's business partner Harold Meachum on an expedition to the hidden city of Kun Lun.  Wendell had found the city years earlier.  There he had earned great respect by saving the city's leader, Lord Yuan.  Lord Yuan adopted and raised Wendell in the ways of Kun Lun.  Eventually, Wendell left the city, became a successful entrepreneur and married Heather.

During the dangerous trip, Daniel trips causing his family to be pulled off a ledge.  Harold is envious of Wendell's business and wife.  He forces Wendell to fall off the cliff to his death.  He asks Heather to come to him for help but she refuses.  Instead, Danny and his mother head off on their own toward Kun Lun.  As they approach the city the pair are attacked by wolves.  Heather sacrifices herself for her son and holds them off while he flees.  Eventually, archers from Kun Lun come and force the wolves back but not before young Danny's mother is torn to ribbons.

Danny is brought in Kun Lun where he expresses his wish to gain vengeance on Harold Meachum for the death of his parents.  He is then assigned to the Kung Fu instructor Lei Kung the Thunderer.  There he undergoes extensive martial arts training including the toughening of his fists by banging them on sand, gravel and rock.  He proves to be the best of Lei Kung's students.  At the age of 19 Danny has proven himself a great warrior and is the given the test of the Iron Fist.  In this test he fights a dragon named Shou-Lao.  He presses his chest against the dragon which burns a dragon tattoo onto his chest.  He then kills Shou-Lao.  After his victory he enters a temple that stores the dragons molten heart.  He plunges his fist into the heart and gain the powers of the Iron Fist.

As Iron Fist he battles Sabretooth, and also begins a long lasting duel with Lei Kung's ostracized son, Davos known as the Steel Serpent.  Davos believes that the Iron Fist mantle is rightfully his and becomes Iron Fist's most recurring nemesis.

Danny joins up with Colleen Wing and Misty Knight.  He and Misty Knight begin an off and on again affair that carries on through the comics.  He also begins Hero for Hire operation with Luke Cage.  Danny and Cage becomes long time friends and business partners.

Powers:
Iron Fist is a monk who has a high degree of training in martial arts and the uses of his own chi.

He can use Chi to enhance natural skills and attributes can lead to:
Enhanced strength, agility, speed, durability, reflexes, senses.

The Iron Fist - Chi can be funneled into his hand to make his fist super strong and resilient.  This power does drain him.

Healing - He can use to Chi to heal himself from wounds.

Telepathy - He can use his Chi to create bridge between his mind and someone elses.

Highly advanced master of all of the martial arts of Kun Lun making him one of the greatest martial arts masters on Earth. 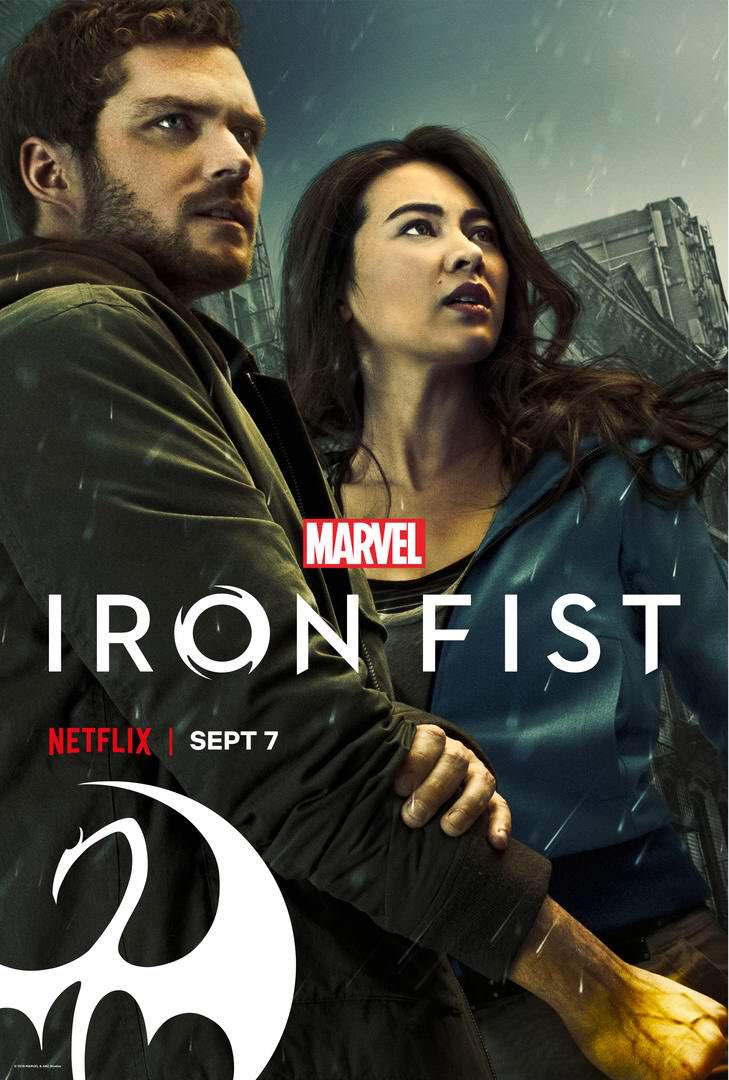 Season one was released on Netflix in 2017.

Synopsis:
Returning to New York City after being missing for years, Daniel Rand fights against the criminal element corrupting New York City with his incredible kung-fu mastery and ability to summon the awesome power of the fiery Iron Fist.

Casting:  Danny Rand is listed as being played by  actor Finn Jones.  Finn is most known for his role as Loras Tyrell in Game of Thrones.

In an interview with the PageTurnersBlog (https://pageturnersblog.com) at the Chicago Game of Thrones behind the scenes promotion Finn Jones stated that his take on Iron Fist will be unique.  Jones explains that one of the things he learned about playing a popular book character being adapted to the screen was:

To not allow myself to be so influenced by the original product. I’ve read some of the [Iron Fist] comics and I’ve been informed and inspired by that world, but I’m not creating my character based on that.  I think it’s really important when you’re dealing with adaptations is to just deal with what you have in front of you, the scripts, and to allow that to inform your character choices and your performance.

Ask which version of the character he is playing Jones responded:


I’m doing none of them, this is my version, this is the Netflix-Marvel Version.


See more of this interview at: https://pageturnersblog.com/2016/12/finn-jones-explosive-exit-game-thrones-sparks-thoughts-new-roll.html 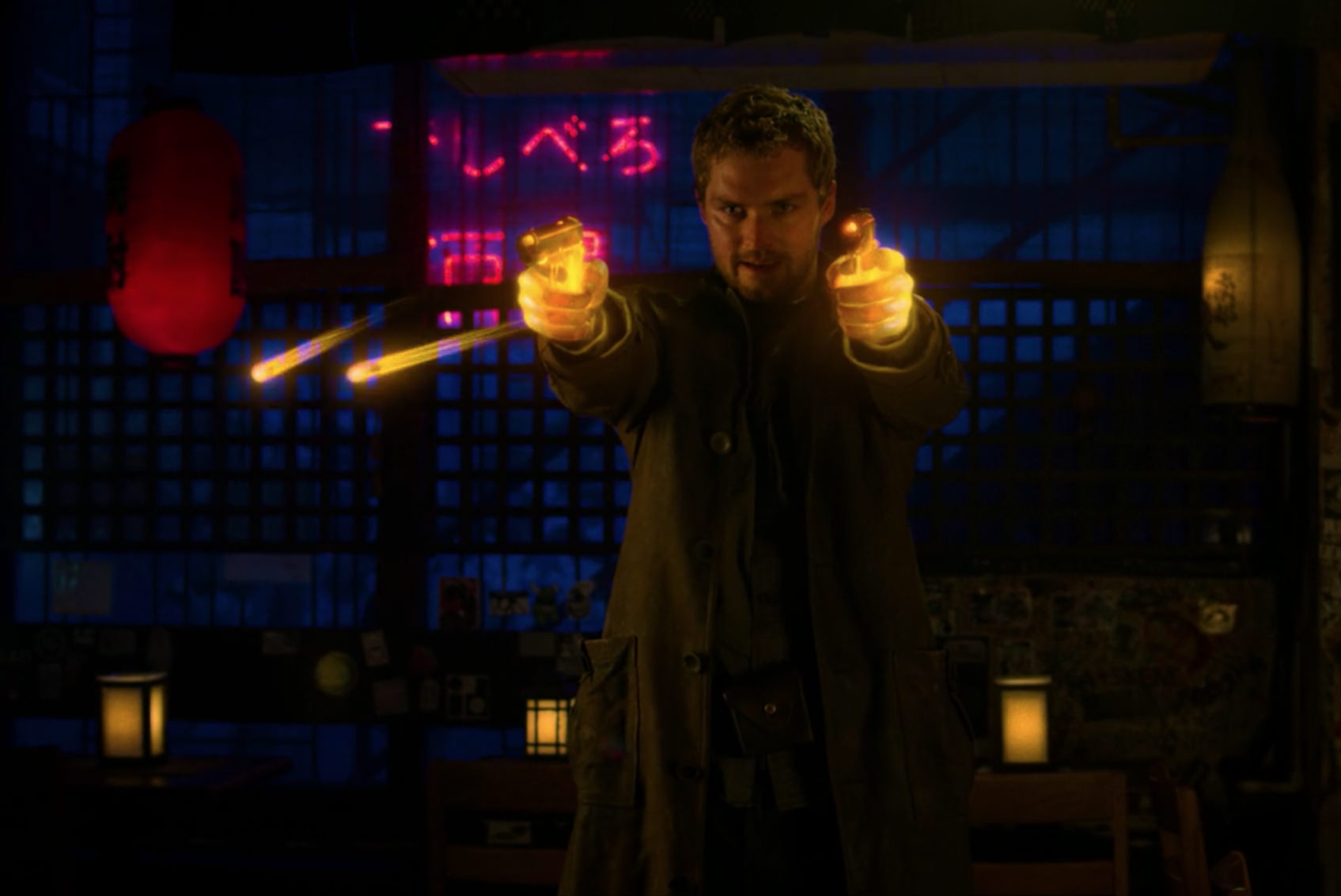 Season 2 of Iron Fist has been met with more positive reviews.  It further delves into the development of Davos into Danny's main rival the Steel Serpent as well as introducing a new powerful villain in Typhoid Mary.

Iron Fist Season 2 features ​Danny Rand (Finn Jones)​ ​as he fights against the criminal element corrupting New York City with his kung-fu mastery and ability to summon the awesome power of the fiery Iron Fist.
Season 2 furthers the transformation of Danny​, a character with a fish out of water coming of age story making his way in a harsh new world, battling to work out who he is. This season, Dann​y​ has promised that with Matt Murdock gone, he will step up and protect his city. ​But a sinister plot twist threatens his very identity ​and he must conquers his villains to protect the town and people he holds close to his heart.
​Marvel’s Iron Fist Season 2 stars Finn Jones (Danny Rand), Jessica Henwick (Colleen Wing), Sacha Dhawan (Davos), Tom Pelphrey (Ward Meachum), Jessica Stroup (Joy Meachum), Simone Missick (Misty Knight) and introduces Alice Eve (Mary Walker).

Villains that will appear in Defenders Netflix series