Pictures of Spider-Man kicking people in the face

Pictures of Spider-Man kicking people in the face

Spider-Man has many offensive kicks that utilize his agility and webbing.   With his swinging momentum and acrobatic jumps few can claim to be better than face kicks than webhead.
He has many types of kicks and ways to do it.  Here are some examples:


Bicycle Kick
A Bicycle kick to the face is also a go to move.  Allows Spider-Man to stay in motion while delivering a powerful blow to someone's head.

The Sling Shot Kick
One of Spider-Man's most powerful moves is to slingshot himself then either do a kick or punch at high velocity.  Here he catches the Green Goblin with one.

Ground to the Head Kick
Here Spider-Man uses his agility and flexibility to kick upward.  This move has helped when he is in a seemingly precarious position on the ground.  It has been used to save himself as a defensive move and also as a way to turn the tide of battle. 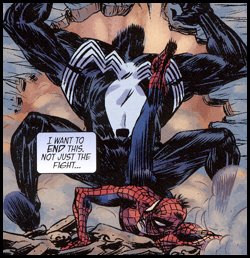