Who is Supreme Leader Snoke in Star Wars? 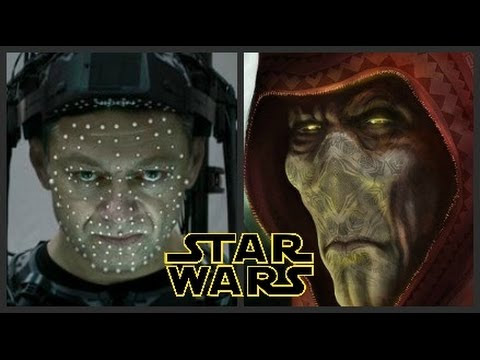 Update 8-14-2017: Snokes Lair Toy
Snoke's liar has been revealed in Toy form.  Snoke can be seen with his Yellow Robes.  It is hard to tell too much about him but he is taller than his own Imperial Guardsmen.

You can see it on the following Link:

I am not going to put the image on my site as I don't want to get in trouble with Disney.

The Lair looks like a pretty standard looking Empire like base.  The base looks spherical in shape so it could even be a new Deathstar.  There is a throne room at the top similar to the Emperors in Return of the Jedi, and the lower level is what appears to be a torture table in a holding cell.  The main level has turrent like gun.

There are also red tubes.  One theory is that Snoke requires blood transufions on a massive level and the red pipes are blood that is being used to keep Snoke alive.


Snoke Store:
Snoke is a new character but he is starting to appear in toys and merchandise.  Here are some toys we found on Amazon that you can check out.  You can Snoke and other Star Wars toys at major retailers like Walmart, Target, and Toys R Us.

Not much is known about Supreme Leader Snoke. He is thought by many to be the primary villain in the upcoming Star Wars Trilogy.  He is thought to be a powerful Sith.  It is the voice of  Snoke that provides the back drop to the film's first trailer saying:

There has been an Awakening.

Have you felt it?

The Dark Side...and the Light.


This would indicate that he is highly intune with the force.

At some point Snoke is able to influence Ben Solo a jedi apprentice of Luke Skywalker to turn toward the dark side.  This seems to result in many dead or slaughted jedi.  Ben Solo then takes on the name of Kylo Ren and serves as the apprentice of Snoke.   Han and Leia, who are Ben's parents blame Snoke for the downfall of their son.

It seems that Snoke is also afraid of Luke Skywalker meaning that Skywalker is likely more powerful.  Perhaps as a bit of a complex Snoke appears as a massive hologram in the Force Awakens.  However it is unclear actually how big he is in reality.

Toylab Rumor control:
These rumors can not be verified.

Kylo Ren is Snoke's apprentice but he used to be Luke's apprentice.  It is unclear how much of Kylo Ren's current Force abilities come from Snoke and how much from Luke.  At the end of the Force Awakens Snoke says its time for Kylo Ren to complete his training.

A resurrected Sith Lord?
It is heavily rumored that Supreme Leader Snoke is the resurrected Darth Plagueis the Master of Emperor Palatine.  However, there are a variety of other Sith he could be.  There is also the possibility he is a new character.

Possible characters that could be Supreme Leader Snoke: The title of Star Wars Episode VIII is The Last Jedi.  The font of the title is red instead of yellow giving the impression that film will be darker than its predecessor the Force Awakens.  This may mean the focus is on the dark side characters instead of the light side ones.   Many initially assumed that the words the Last Jedi referred to either Luke Skywalker or to Rey.  However, it could be argued that Luke Skywalker while trained in the Force was never a true Jedi.  His father could have been considered the last "Known" Jedi when he turned against Palpatine and threw him into the pit at the end of Return of the Jedi.  This in some sense depends on what is meant by Return of the Jedi.  Did the title of Return of the Jedi mean that Luke was a Jedi or did it mean that Anakin returned to being a Jedi?

If Luke and Rey are not the Last Jedi then who is? Could it be Snoke?

There are actually some reasons to think that this is possible.  Snoke is old and alive during the Republic and the Empire.  He is one of the few characters that would have been alive during this full period.  He is also a force user and the known force users at the time were Jedi.  Kylo Ren's light saber is also thought to have been from an ancient Jedi design.  How did Kylo learn about this design?  It was presumably built after he joined the Knights of Ren which would indicate that he learned about it from Snoke.  If Snoke were not a Jedi then how would he know how to construct a lightsaber.

These facts would point toward Snoke being a fallen Jedi who left the order and was not killed by Order 66.  He then watched as the Empire rose and crumbled and swooped in to take it over after the fall of the Emperor.

One theory is that Mace Windu could have disfigured in his battle with Darth Sidious.  Windu was always a character inbetween the Light and the Dark in part referenced by his Purple Lightsaber.  Windu could have survived his fall and wounds then healed slowly over the centuries.

This is a theory from the website MoviePilot:
They explain it very well:


The dark side is very strong with the Inquisitor, so the force could have protected him… somewhat. Hence the scarring of Snoke. Snoke looks to have a form of a Pau’an being (from Utapau), which is The Grand Inquisitors race as well. Star Wars Rebels has a different animation style than the big screen movies. So Snoke could very well be Pau’an. Snoke has severe scarring — Maybe from an explosion? But still has a Pau’an look to him. Snoke is obviously strong with the Force — as was the Inquisitor. He was highly trained in using the Force to control his lightsaber throws as well as interrogate prisoners. Snoke specifically wants to find Luke Skywalker. Possible Jedi hunting continued after Vaders death. Snoke is 7 feet tall according to Andy Serkis. And the Grand Inquisitor is approximately that height as well. Snoke as an Inquisitor makes more sense. Plagueis would have a different approach to alliances. In this case, the Knights of Ren. (Like an evil Arthur and the Knights of the Round Table.) Plagueis, as stated earlier, would be wiser in his choice of an apprentice rather than a gamble on Kylo Ren.

For more on this theory go to MoviePilot.


Could Snoke be something New? Something Different?

It seems increasingly likely that Snoke is an altogether new character or perhaps its better to say a really old one that has not been shown before.

Entertainment Weekly Andy Serkis saying that to effect that Snoke was very old, and ancient.  That he may have lived longer than Maz Kanata's 1000 years.  This would mean that Snoke had lived through all of the previous films but perhaps was not a visibile player in them.  Andy Serkis commented on this by saying that:

"He’s aware of what’s gone on, in the respect that he has been around and is aware of prior events. I think it’d be fair to say that he is aware of the past to a great degree."


Gallius Rax?
Some clues for who Snoke is may lie in the novel Aftermath. Aftermath tells the story of what happens to the Empire after Emperor is kills and 2nd Death Star is destroyed in the events depicted in Return of the Jedi.

Another theory is that Snoke is something from Outer Rim.  In the book Aftermath Palpatine has said they he senses some major dark side power in the Outer Rims.  He begins allocate a great amount of Imperial Resources to search the Outer Rim for the origin of what he senses.  It should be noted that for how powerful Palpatine is he has not always been shown to have the best detection skills.  This would mean that whatever he senses is a major power.  In Aftermath the Emperor's remaining advisers makes it clear that one of the primary goals should be to pursue the darkness at the edge of the galaxy.  The advisor was one of the pale sick looking dudes depicted in the film Return of the Jedi.  He mentions that Palapatine had personally sent search parties and colonies in the outerrim.  The direction to retreat to the outer rim caused division in the imperial ranks as some leaders would rather stay and battle for control of the core worlds.  These leaders see the idea of retreating to the outer rim as a silly notion and instead urge a counter strike on the New Republic.  The Imperials that choose to battle the New Republic in the end of Aftermath are defeated.  Leaving the remaining Imperial Forces retreating toward the outrim.


What is known through the film the Force Awakens though is that Imperial Forces did retreat and they return with Snoke as a the rebuilt First Order.

Actor:
He is played by actor Andy Serkis in Star Wars: The Force Awakens. Serkis is famous for playing a variety of CGI characters like Golum in Lord of the Rings.

Concept Art:
There are many different pieces of art created for Snoke but it is not yet known which was final.

Who is Kylo Ren?
Who is General Hux?
Who is Finn?
Who is Rey?
Who is Supreme Leader Snoke?
Who is Captain Phasma?
What is the First Order?
on October 16, 2017