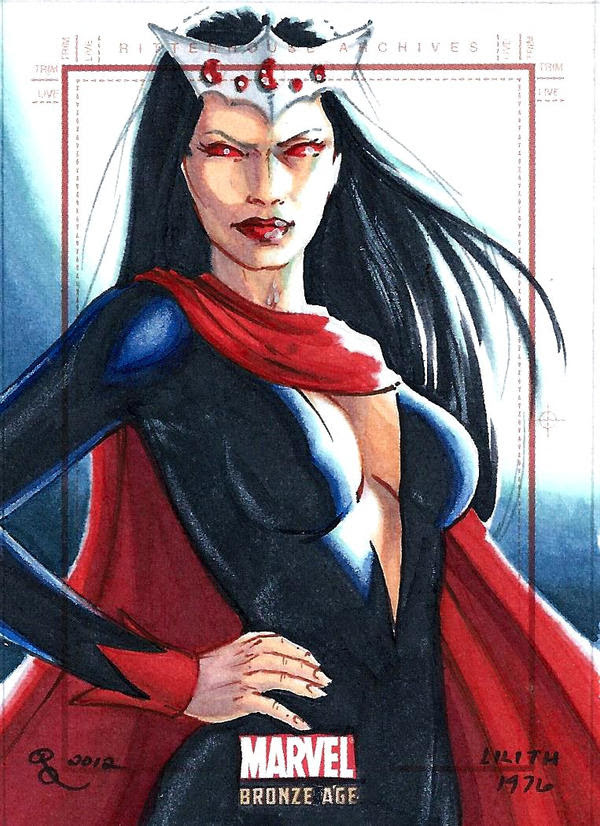 There are two characters named Lilith in the Marvel universe. One is the daughter of the vampire lord Dracula and the other is a mother of Demons.  The vampire version is discussed first and the demon version is on the bottom.  As neither character is super popular the news and media related to both characters is above their bio/power information:

Lilith is Dracula's oldest child from his first wife Zofia.  Zofia was forced on Dracula by his father and thus he never truly loved her.  When his father died he forced Zofia and their young daughter (Lilith) to leave Castle Dracula so he could remarry.  Due to the trauma of this Zofia shortly thereafter committed suicide.  Lilith was then raised by a gypsie sorceress named Gretchin.  Gretchin's son is killed by Dracula which enrages the Gretchin she casts a spell on Lilith to make her into a powerful vampire that could oppose him forever.  Lilith is given all the powers of a vampire but with almost none of the weaknesses.  Her existence is also tied to her father such that so long as he lives, so will she.  When killed, Lilith would reappear taking over a body of a woman who hated her father and badly wished for his death.  This hostess would share the body with Lilith and could shape change including clothes back and forth.

For a time, Lilith and Dracula settle upon a truce and agree to avoid each other.  When Dracula loses his powers he seeks out Lilith and asks her to bite him so he can be restored.  Lilith refuses and the two battle.  In this battle, Dracula reveals that the curse that connects also prevents her from being able to fully kill him.

In the Vampiric Verses story line Doctor Strange uses the Montesi Formula to eradicate all vampires including Lilith and her father Dracula.  However, the power of the spell is eventually weakened and Dracula returns.  The curse that ties Lilith to her father still functions and when Dracula is reborn so to is Lilith.

Lilith has gone on to be a paranormal agent of SHIELD's Howling Commando unit.

Powers:
All the powers of a vampire - super strength, speed, durability etc.

Additionally she does not have the weaknesses of a normal vampire.  Lilith is immune to sunlight and holy symbols.  She also does not depend upon drinking blood for sustenance.

Lilith can not be fully destroyed until her father Dracula is destroyed.  There existence is thus linked.

Lilith is demonic sorceress who calls herself the mother of all demons.  She is a villain who battles the Marvel hero, Ghost Rider.

Moniker:  Mother of All Demons

Bio:
Lilith is an immortal sorceress who initially lived in the ancient and magical city of Atlantis.  Over the years she has given birth to a variety of demonic children including;  Lilin, Creed, Pilgrim, Fang, Doc, Meatmarket, Skinner, Nakota.

These children all became scourges on the world and most were defeated by the hero, Ghost Rider.

Though very powerful, Lilith was trapped for many years in a other dimensional prison called the Tiamat by Alantean sorcerers and was only able to influence the outside world indirectly.  She was eventually released by explorers who foolishly released her.  Upon her release she immediatly sought out to avenge her children who had been killed or trapped by the Ghost Rider.

Later she would also battle Morbius and Doctor Strange.