Who is Carl Grimes on The Walking Dead?

Who is Carl Grimes on The Walking Dead? Carl is the son of Deputy Sheriff Rick Grimes and Lori Grimes.  When the zombie apocalypse begins Rick is comatose and is believed dead at the hospitable.  Lori takes Carl and they leave with Rick's partner Shane.  They head toward a safe zone that quickly falls apart.  Instead, Shane ends up leading a small group of survivors camping on the outskirts of Atlanta.  Eventually Rick finds them there.

Due to the dire circumstances the family finds itself in Carl is forced to grow up very quickly.  At the age of 7 he begins practicing using fire arms and quickly becomes adept with them.  Using a pistol he saves his mother from a walker.  Later he shoots and kills Shane who had become erratic and a danger to his father.  Rick begins to worry about his son and his behavior and attitude grow increasingly cold and callous.  At times Rick tries to thrust his son into normal innocent child like behaviors.  However, the dark world in which they live often come crashing in.

Carl is shot accidentally by a man named Otis.  Otis had been attempting to shoot a deer.  Carl recovers under the care of veterinarian Hershel Greene and for a time the family stays at the farm.  Eventual friction lead the group to move on to a nearby Prison.

During this time Lori reveals she is pregnant with another child.  Carl is very happy at the thought of having a younger sibling.  Carl is loving and protective over his new baby sister, Judith.  However, both his mother and his younger sister are killed during an attack on the Prison by the governor.

Carl has numerous dark experiences as the group travels from the prison.   A group of red necks attempts to rape him but are brutally killed by the intervention of Rick.  One young twin survivor becomes insane and kills the other.  No one in the group knows what to do with the surviving murderous twin.  As a fellow child, Carl sees it as his duty to dispense justice and executes the boy.  The group is also hunted by cannibals, before ambushing and killing the other survival group.

Eventually the group finds its way to civilization in the form of Alexandria.  There Carl struggles to fit in with other children who have been far more sheltered than him.   Morgan a survivor that Rick met early in the apocalypse joins Alexandria and forms a strong bond with Carl.  He pushes Carl to regain his childhood innocence.  Upon his death Morgan tells Carl that he knows about a murder committed by Carl and tells him to not give into the darkness.

While in Alexandria, Carl is shot again, this time in face.  He recovers from the wound but loses an eye, and carries a brutal scar on his face from the wound.

Saviors
The group enters a prolonged confrontation with an organized and violent force called the Saviors led by a vicious man named Negan.  Rick pretends to go along with Negan's demands in a ruse that he hopes will allow him to learn more about the group.  Angry at his father's seemingly weak actions Carl takes actions into his own hands.  He sneaks aboard a Savior truck and emerges at the Savior base called Sanctuary with a machine gun.  He kills a few Saviors before being subdued.  Rather than punish Carl for kill his men Negan is impressed at how brave Carl is.  He attempts to wine and dine him before sending him back to his father in Alexandria.
Carl stays behind in the SafeZone as Rick leads the forces from multiple communities against the Saviors.  Eventually, Negan is captured and the Saviors are brought into the groups network. 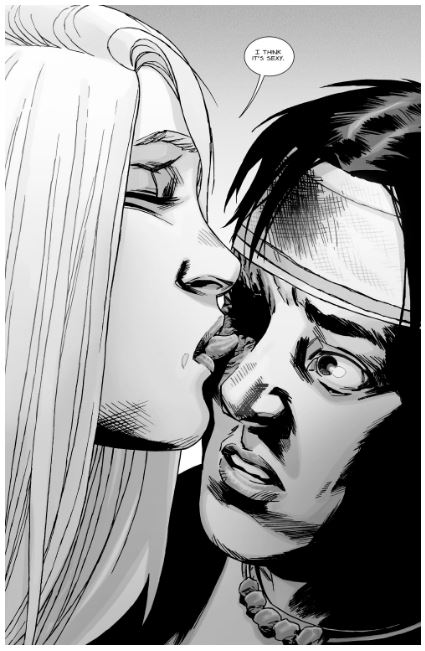 Carl begins a apprenticeship beneath Earl Sutton a blacksmith in Hilltop.  On a date with Sophia he is attacked by two other boys at Hilltop.  Carl viciously beats them with a shovel.  The boy parents want Carl to be punished for his actions.  For a time he is held in a cell.  In prison he meets Lydia a prisoner of a mysterious group called the Whispers.  The two become close and eventually Lydia seduces Carl.   The Whispers bring an army to the gates of Hilltop where Lydia's mother, Alpha demands that she is returned.  Carl believes that the group abuses Lydia and begs Maggie to let her stay.  However, Maggie does not want to begin an armed conflict with the large group and returns the girl.  This enrages Carl and he sneaks out of Hilltop and sets out after Lydia.


Carl has written his father a letter in case he dies the letter reads:


I remember my eighth birthday at KCC with that giant cake and Aunt Eavey showing up on leave, surprising all of us. I remember Mom, I remember Codger, I remember school and going to the movies and Friday night pizza and cartoons and Grandma and Grandpa and church. Those summer barbecues and the kiddie pool you got me. We could’ve used that at the prison.

You told me about the walks we’d take when I was three. You holding my hand around the neighborhood, all the way to Ross’ farm. I didn’t know that I remembered them, but I do. Because I see the Sun, and the corn, and that cow that walked up to the fence and looked me in the eye.

And you told me about all that stuff, but it isn’t just that stuff. It’s how I felt. Holding your hand, I felt happy and special. I felt safe.
I thought growing up was about getting a job and maybe a family, being an adult. But… growing up is making yourself and the people you love safe. As safe as you can, because things happen.

There are workers in there, Dad. They’re just regular people. Old people, young people, families. You don’t want them to die, Dad.

We’re so close to starting everything over, and we have friends now. It’s that bigger world Jesus talked about. The Kingdom, the Hilltop… there’s got to be more places. More people out there. A chance for everything to change and keep changing.
Everyone giving everyone the opportunity to have a life. A real life.
So if they won’t end it, you have to. You have to give them a way out. You have to find peace with Negan. Find a way forward somehow.

We don’t have to forget what happened, but you can make it so that it won’t happen again. That nobody has to live this way. That every life is worth something.
Start everything over. Show everyone that they can be safe again without killing. They can feel safe again. That it can go back to being birthdays and school and jobs and even Friday night pizza, somehow. And walks with a dad and a three-year-old holding hands.
Make that come back, Dad. And go on those walks with Judith. She’ll remember them.

Places:
Sanctuary - Base of the Saviors
Alexandria Safe-Zone

Other:
Why do people like Zombies?
Happy I am Zombie Day!

Who is Rick Grimes?
Who is Michonne?
Who is Morgan Jones?