Deadpool movie formula - The Good, The Bad, and The Crazy

Hollywood, and the comics, all are often accused of following a basic formula, that they use again and again because.....it works.  Maybe I just not that sophisticated because generally I don't mind.  That said I do appreciate Super Hero works that break the mold and offer something new.

Deadpool seems to be offering something very fresh.

Witness the beginning of a happy ending. Do yourself (a favor) and watch the brand new #Deadpool trailer NOW. https://t.co/qmDP7z8SSc
— Deadpool Movie (@deadpoolmovie) August 5, 2015

Ryan Reynolds has promised Deadpool material to be released for the 12 days leading up to Christmas.  On the 25th a new Trailer will come out. Please tell me that is Egg Nog.

Tone:
Right on its face is that film is trying to stick to the dark comedic tone of its comic source.  The Deadpool comic itself is a bit different in that Deadpool breaks the 4th wall and often addresses the reader directly.  He is completely reverent of just about everything.  I really can't think of another Comic Book Movie that had a similar tone as this maybe Howard the Duck? 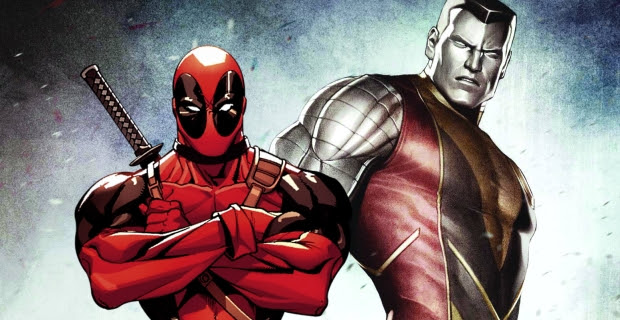 The characters used in the Deadpool film also stand out.  The characters tend to be obscure Marvel characters pulled out of Deadpool's comics and origin story.  The villain Ajax is not widely known.  Some characters like Negasonic Teenage Warhead and Copycat are almost completely unknowns.  In this sense the film is almost like Guardians of the Galaxy featuring many new characters.

The film does star two very prominent characters however in Colossus and Deadpool.  Both of these characters are well known for the presence in the X-Men franchise as well as in comics.  However, neither have appeared very much in films.  There are many who would say their presence in prior films was so distorted that neither has actually appeared.   These are popular characters that X fans have been wanting more of.

The character choices here are interesting.  They are picking interesting unknown characters to keep things fresh, while simultaneously giving more air time to a couple of popular faces.  Its an interesting mix of new and old that should keep the audience on their toes.

Rating:
Deadpool is going to be rated R, and will likely earn it with an array of trash talk, violence, and mature topics.

This is actually a bigger deal than one might think.  There are not many R many movies being release any more and few to none in the Super Hero genre.  I'm trying to think of the R rated super hero films and the only ones that come to mind are the Blade films and Watchmen.  The rating is going to allow for the film to be very different than what we are used to seeing, and from I have seen it is going to relish the chance to do this.

Ryan Reynolds has been a one man promotion machine.  His silly Deadpool tweets have set the geekverse on fire multiple times with his hilarious antics.  Deadpool may now have exceeded Snakes on a Plane in online buzz, with the difference being that the movie actually looks good.

Who is Deadpool? What are you nuts?
Jessica Nigri - Deadpool cosplay