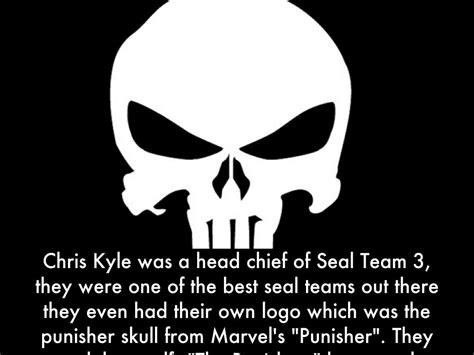 One thing comic fans notice in the film American Sniper is that Chris Kyle and his group of American Soldiers often don gear and equipment bearing the symbol of the Marvel character the Punisher.  The symbol is known as the death's head and is a jawless, white skull with long teeth.

Having seen and enjoyed the film I became interested in the use of the Punisher symbol.  I began researching how the symbol was used, and to see if Chris really was a fan of the Punisher.  In my research I came across many different opinions on Chris, the Seal Teams, and Iraqi Freedom.  This post is not going to dig into opinions on the war.

The goal of this post is to track the use of the Death's Head symbol in American servicemen in Iraq and also by other Iraqi group that have since adopted it.

The Punisher Symbol use in the military:
Skulls have long been a part of military symbolism. A great article on its uses over time can be found Here (Specialforces Newsletter)
The use of skulls as a symbol greatly predates the comic character the Punisher.  Skulls have been used as military symbols for thousands of years.  They are intimidating and military groups tend to adopt intimidating symbols.   For this reason much of the adoption of the Punisher symbol may have very little to do with the actual Punisher character and more to do with it being a modern Skull symbol.

Deuce Four Skull of 24th Regiment:
One of the first uses of the Punisher symbol in Iraq was by the 24 Regiment. 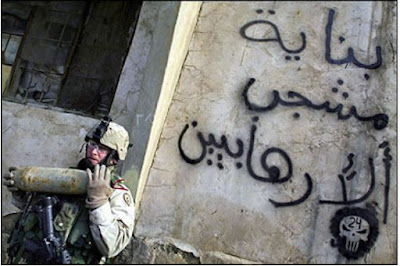 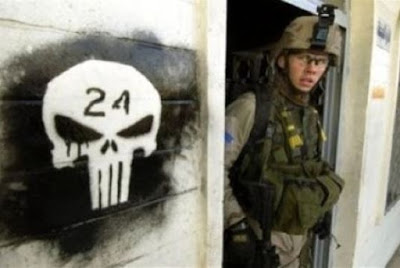 The Deuce Four Skull became the unofficial symbol and calling card of the 24th infantry regiment during operation Iraqi Freedom.  The Deuce Four symbol appears to be nearly an exact copy of the Punisher emblem with a 2 and 4 added into its forehead.  Members of the regiment are said to have adorned themselves with the symbol and marked buildings where they had fought and killed enemy combatants.  The symbol made them one of the most infamous and feared groups during the Iraqi War. 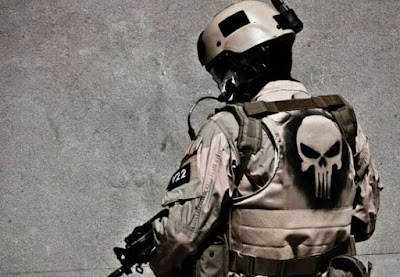 Seal Team 3 which Chris Kyle was a part of also adopted the Punisher Skull symbol.   The group is even said to refer to itself at times as the Punishers.

Seal Team 3 was the most distinguished and famous groups operating in Iraq.  Their exploits in the Battle of Ramadi are well known.   The Battle of Ramadi itself has become arguably the most legendary battle in Iraqi Freedom and Seal Team 3 the most famous of unit to operate in it.   The use of the Punisher symbol by Seal Team 3 during this battle is very well documented as will be shown below in pictures.

Daily Mail noted that,“the members of the unit adopted the white skull of the gun-wielding comic book vigilante The Punisher.  They painted the symbol on their body armor, their vehicles and even their weapons.”

The New Yorker noted that Chris Kyle went beyond liking the symbol, “Kyle seemed to consider himself a cross between a lawman and an executioner. His platoon had spray-painted the image of the Punisher—a Marvel Comics character who wages ‘a one-man war upon crime’—on their flak jackets and helmets.”  When Chris created his own company Craft International LLC the company used a similar skull logo.  The group that Chris Kyle fought with also called themselves the Punishers. In his autobiography Chris Kyle's said he confronted other American groups attempting to use the symbol, “We told them we are the Punishers. They had to get their own symbol,”

Here are pictures of Kyle using the symbol on his back, as well as on his rifle.  Also a picture his hat bearing the logo of his company Craft International LLC. 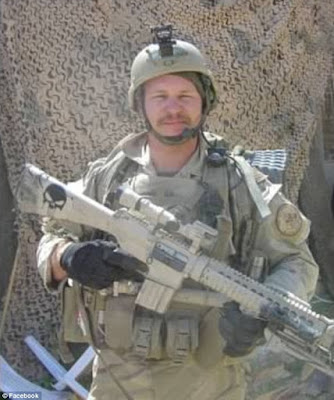 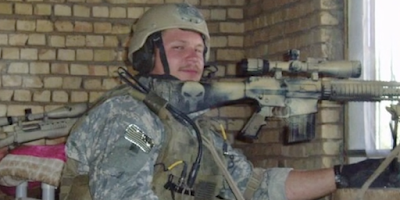 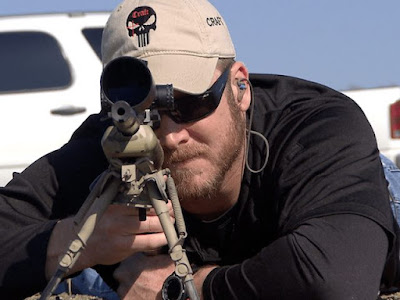 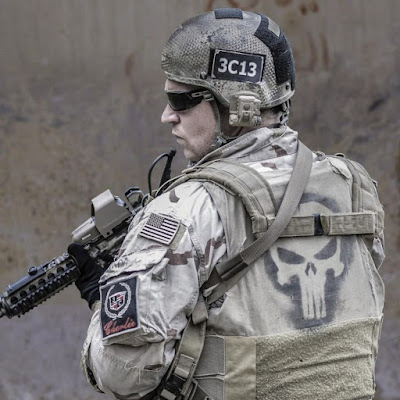 It needs to be noted that this was not just Chris Kyle.  Many of the other Seals also adorned themselves with the Death's Head symbol.

It is very clear from pictures that the Seal's used the Death's Head and Punisher name in Ramadi. 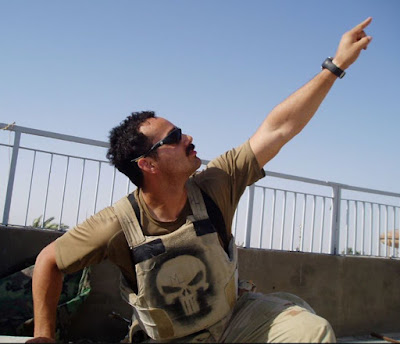 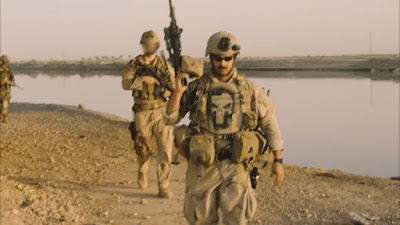 Well known Navy Seal Jonny Kim who was a member of Seal Team 3 along with Chris Kyle can also be seen wearing the symbol showing that it was widely worn by the group in Iraq.  Jonny Kim has gone on to become a doctor and an astronaut.

Also featured with Kim is another Seal at the battle of Ramadi Kevin Lasz who would go on to write the book The Last Punisher (See below). 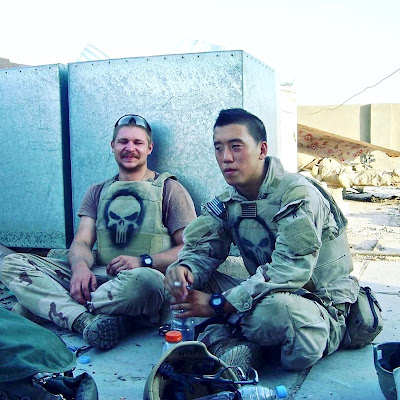 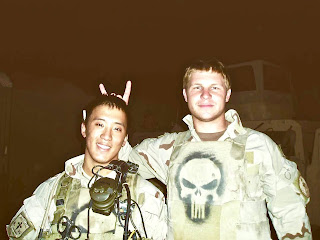 Additionally, another popular book on Seal Team 3 is "The Last Punisher".  The book's title makes direct reference to the Punisher and the cover features a Seal Sniper adorned with the Death's Head symbol on his back. 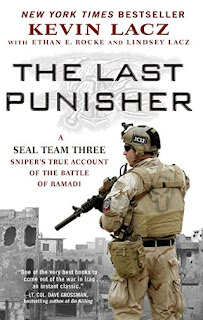 I can not find a member of every Seal wearing the Death's Head.  However, it does seem to have been worn fairly ubiquitously by the Seals at the Battle of Ramadi.

Some of these forces may use it to pay homage to US Platoon the Punishers or at least draw upon their infamy.  Most likely they just appropriated because it looked cool and intimidating.


Aymenn al-Tamimi, a researcher at the Philadelphia-based think tank Middle East Forum pointed out that the use of Punisher symbol by Iraqi Armed forces paralleled its use by Shiite Milities.


The Iraqi Shiite militia Faylaq al-Wa'ad al Sadiq uses a symbol of American origins as well.  They use an emblem based off the Marines raising the flag over Iwo Jima.  Tamimi commented on the group saying they were “ as anti-American as you can get. It was a proxy group set up to attack U.S. forces in the days of the Iraq war,” ...‘I think they come to the point where they forget about the American connection and they just see these as general symbols of military might and strength.” 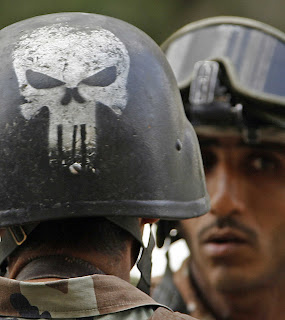 Reasons for popularity in the US Military:
The Punisher is a popular character in the American Military.  The reasons for this are many.  On his face the Punisher character was trained in the military, and uses military weapons and tactics to defeat his foes.  These attributes immediately synchronize the armed forces with the character.

There is also a philosophical synchronicity.  The Punisher goes after the bad guys with violence.  His ethos is that there is a time and place for violence.  Violence can be used to help protect the innocent from the bad guys.  This is very similar to the Sheepdog philosophy preached by Chris Kyle's father in the American Sniper Film.  In this philosophy he breaks down the world into sheep, wolves and sheep dogs.  Sheep are those people who are essentially good but unable to defend themselves.  The wolves are those capable of violence and use it to prey on the sheep.  The sheep dog is what Chris's father tells his kids they should aspire to be.  The sheep dog is capable of violence but uses it to defend itself and the sheep from the wolves.  The Punisher and Sheep Dogs seem to have a lot in common.

Beyond the this there is the fact that the Punisher is a bad ass and soldiers naturally flock to bad asses.  The symbol is scary and intimidating looking and that always makes for a good symbol when going to war.

Ethical Problem's with the use of the symbol:
The Punisher was created as a villain in comic books.  He was meant to symbolize a vigilante that went too far and had to be stopped by other heroes such as Spider-Man.  Gerry Conway the creator of Punisher himself has come out against the use of the symbol by police officers.


"When cops put Punisher skulls on their cars or members of the military wear Punisher skull patches, they're basically sides with an enemy of the system. Whether you think the Punisher is justified or not, whether you admire his code of ethics, he is an outlaw—he is a criminal. Police should not be embracing a criminal as their symbol."


Conway has also compared the use of the symbol as flying a Confederate Flag on a government building.  The meanings of the two naturally conflict to those who understand them.  A police officer should seek to follow and uphold the law, the justice system and should not work outside it in the manner of the Punisher.

While this criticisms is often more directed at Police Officers who are intended to serve the people and uphold the law, it could similarly be directed at military groups who adopt the Punisher symbol.  While they are military and not always intended to act as peace officers they are still expected to follow orders, battlefield rules and laws.  The Punisher symbol is in conflict with this.

This is issue is addressed in the comics where the Punisher is confronted by a group of police officers who claim to be his fans.  The Punisher tells the officers that they should use Captain America as a role model and not him. 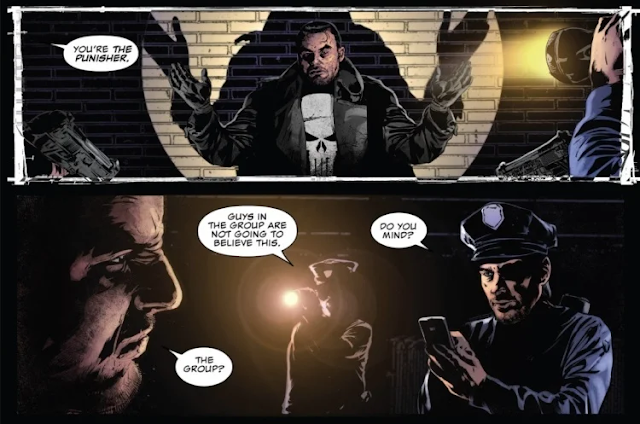 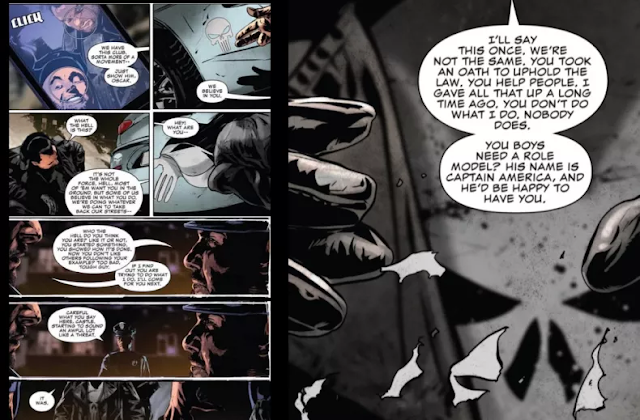 Chris Kyle and the Punisher It is hard to say how much Chris read Punisher.  There is a moment in the film where he speaks to a soldier reading a Punisher comic.  He also could have seen one of the films representing the character.  From the use of the symbol by his platoon and company it is very clear that he was aware of who the Punisher was and what he was about.

From Chris Kyle's autobiography he wrote the following on the Punisher:
“He righted wrongs. He killed bad guys. He made wrongdoers fear him,”... “We spray-painted it on our Hummers and body armor, and our helmets and all our guns. We spray-painted it on every building or wall we could, We wanted people to know, We’re here and we want to f**k with you.”

Related:
Who is the Punisher?- Punisher news, stories art and rumors