Who is Daniel Salazar on Fear the Walking Dead? 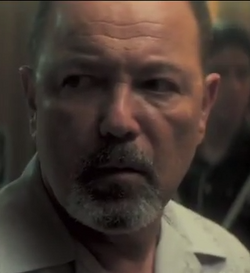 Who is Daniel Salazar on Fear the Walking Dead?


Daniel Salazar is a refugee from El Salvador who will protect his family at any cost. He owns a barbershop and takes great pride in his business but mostly keeps to himself within the community. Some of Daniel’s regulars have been going to Salazar’s Cuts for years, but they barely know the man who cuts their hair. When people began rising from the dead, Salazar reverts to the man he once was, a man who will do anything to ensure the survival of his family.


Toylab Bio:
Daniel Salazar was born in El Salvador. He escaped the 80's civil war and moved to Los Angeles with his wife.  Prior to the apocalypse he owns and operates a barber shop. He is proud of raising an "American" daughter. A humble man who keeps to himself and protects his family.  He deeply loves his wife, Griselda and daughter ,Ofelia.

His daughter, Ofelia feels he is too stuck in the old ways.

Madison works to keep her family safe and sane as they trapped in their house.  There neighborhood is taken over by soldiers.  She also weans Nick off of drugs.  Nick is arrested and brought into the military base.