Who are the Faltine aka Faltinians?
The Faltine are a race of energy beings in the Marvel.  They are most famous for one of their rogue members, the villainous Dormammu.  They appear most often in Doctor Strange stories. 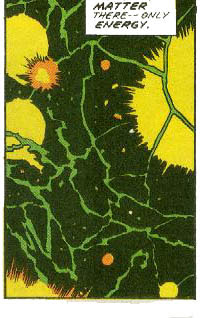 History:
The Faltine are an ancient race that live apart from the physical dimensions in an all energy state.  When Faltine reproduce they spawn creating an exact duplicate of themselves.

A Faltine named Sinnifer spawned two new children who were different than Sinnifer.  These two Faltine, Dormammu and Umar became infatuated with the physical world.  Seeing that the two could cause great harm Sinnifer tried to stop them from being physical matter.  Instead, Sinnifer was transformed into matter, which effectively killed him.  Horrified at the taboo actions of the two new Faltine the rest of the race joined and kicked the two of the dimension.  Dormammu and Umar would go on to become rulers of a vast dimensional empire and come in conflict with the Earth hero Doctor Strange.

Faltine in Human Form:
After giving birth to a daughter Clea, the Faltine Umar was unable to return into an energy state. This makes Umar the only Faltine to appear constantly in human/physical form.  Umar's daughter Clea who is half Faltine has always been in a physical human form but can draw upon internal energy from her Faltine heritage.

Dormammu reverts back and forth between physical and energy form as he desires.

Have energy powers, dimension travel, can grant the Flames of Faltine.

The Flames of Faltine are a spell that Doctor Strange has caste on multiple occasions that draw forth powerful fire like powers from the Faltine Dimension.

MCU:
As of yet there has been no mention of Faltine in the MCU however this may change with the upcoming Doctor Strange film.

Other Doctor Strange Characters and Items:
Who is Clea?
Who is Morgana Blessing?
Sanctum Sanctorum
Cloak of Levitation-
Eye of Agamotto
Orb of Agamotto
All New All Different Doctor Strange comic to come out in Fall of 2015
Who is Agamotto?
on October 08, 2017