Who is Speedball and Penance? 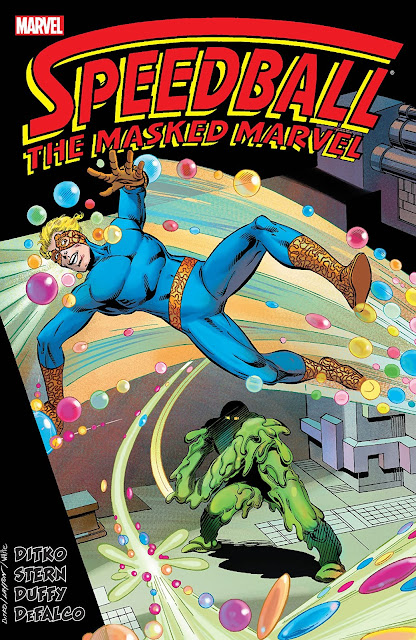 Speedball is best known as a hero in the Marvel series the New Warriors.

Speedball News:
Season 3 of Agents of SHIELD will have a super team - Who will be on it?

Bio:
Speedball is best known as the fun and a tad silly hero who was a member of the 90's New Warriors.


Robbie Baldwin is irradiated with an unknown form of energy and gains a special mutagenic power.  Baldwin is able to create a kinetic energy bubble around himself.  Baldwin kinetic energy bubble grows in strength based off the energy thrown at it.  Thus the powerful the blow, or blast hurled at him the stronger this shell becomes.  The shell can cause Baldwin to blast around quickly and at first uncontrollably.  Overtime he was able to practice and train to the point where he could consciously control his power, as well as the direction of his movements.

The New Warriors team attempts to stop a villain named Nitro in Stamford Connecticut.  Nitro creates an enormous blast that kills 612 civilians as well as the entire New Warriors team other than Speedball.  This event kicks off the registration effort to classify all super heroes and villains by the government and Iron Man.  Iron Man is opposed in this super hero Civil War by Captain America.  Speedball himself feels terrible for his role in the Stamford Massacre.  He is shot in an attempted assination attempt and his powers begin to change.  He finds that infliction of wounds can cause him release energy and creates a suit with 612 internal spikes that drive into his flesh.  This self mutiliation allows him to create energy blasts.  With his new suit he begins to use the moniker of Penance.

Baldwin's Speedball powers have now returns and he now is using a new Speedball suit as opposed to the Penance one.

Speedball - Kinitic Shell that allows him to bounce around without harm.  He gain increased momentum and durability as more energy/power is hurled against him.

Speedball is a character that is rumored to appear in Season 3 of Agents of SHIELD.  It is possible he will be mentioned in one of the Caterpillar files provided by Coulson to Skye.


Rumors are that actor and Whedonverse alum (Doll Fran Kranz could play the hero.  Fran tweeted out a tweet that mentioned Robbie Baldwin (Speedball's real name).  He then deleted the tweet.

Speed Ball has yet to appear on the show however rumors do still persist.

Related:
Marvels Agent of Shield speculation HUB
Season 3 of Agents of SHIELD will have a super team - Who will be on it?
What is hiding in the Gonzalez's SHIELD carrier?