Who is Miles Morales aka the Ultimate Spider-Man? 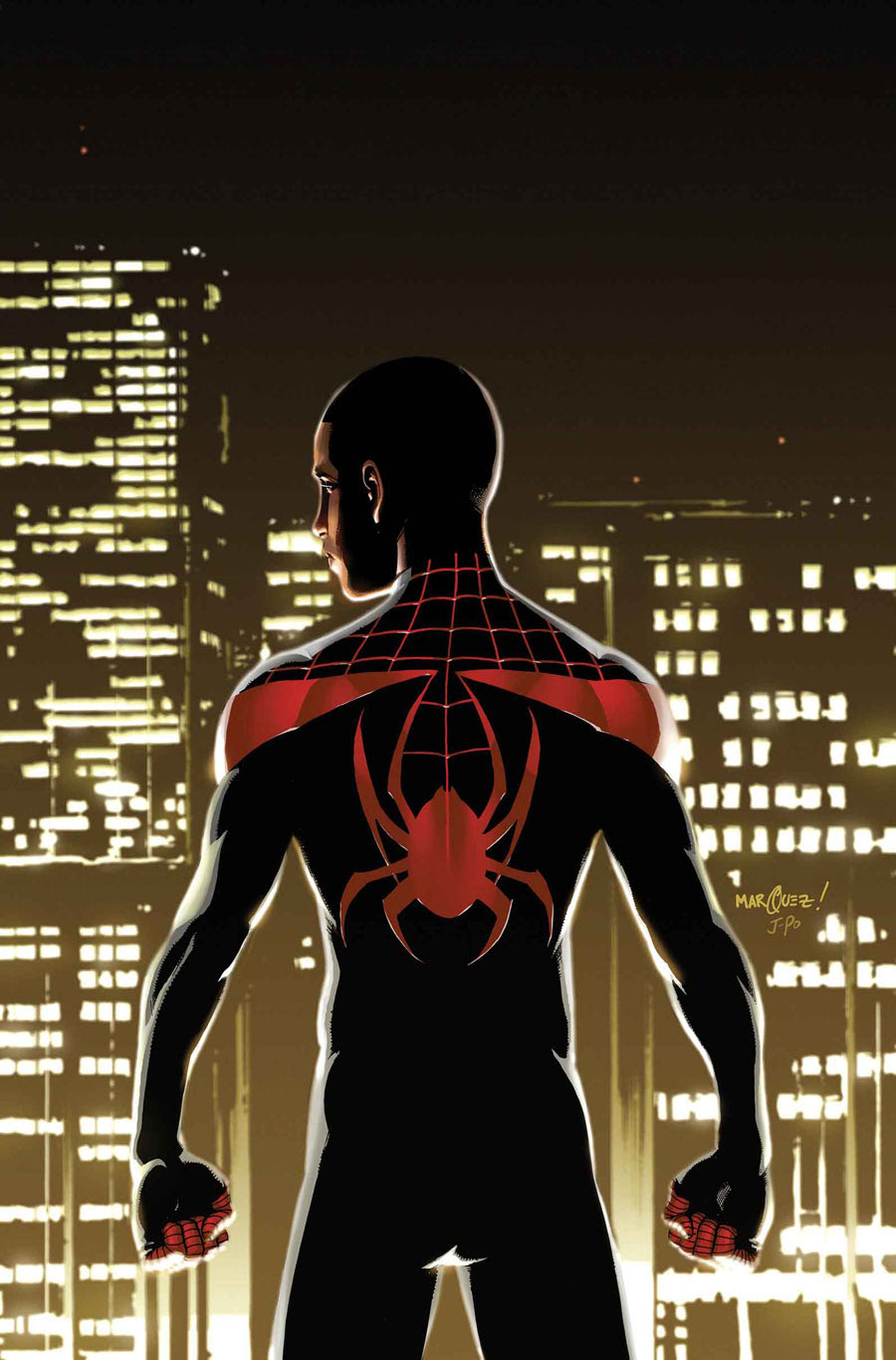 Who is Miles Morales aka the Ultimate Spider-Man?

Miles Morales is a Spider-Man from the world 1610.  Initially, reluctant to use his powers he becomes a full fledged Spider-Man after the original Peter Parker dies. 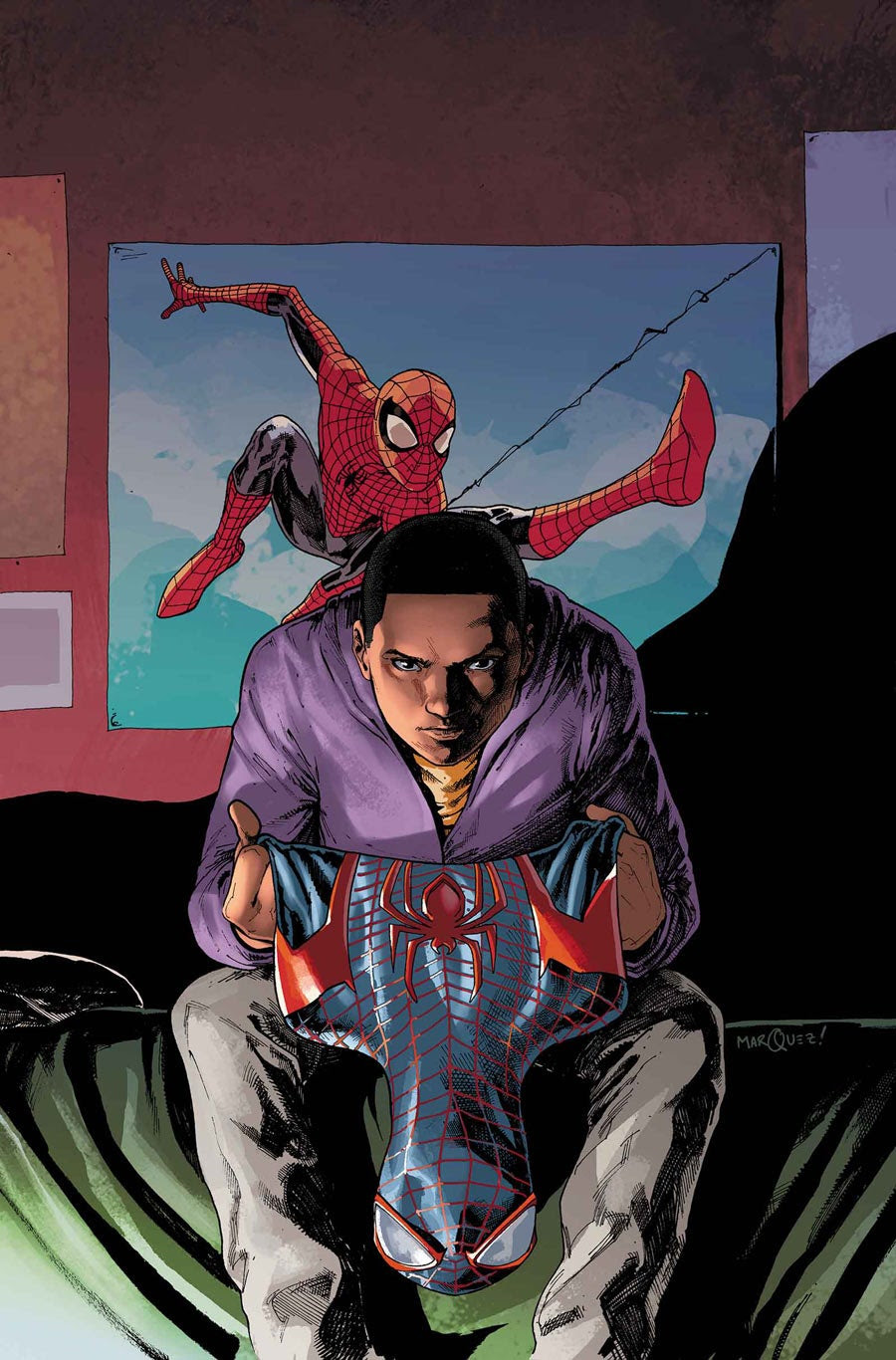 Origin:
Miles Morales is visiting his criminal uncle when a Spider comes out of his uncle's bag and bites him.  It turns out his Uncle (The Prowler) had just robbed Oscorp and accidentally brought the genetically engineered spider home.  The spider was infused with the special Oz formula.  The Oz formula being a super power creating formula.  Due to the Oz formula, Mile develops an array of Spider based powers like Spider-Man and some new ones.  He can fire stun blasts that temporarily paralyze opponents and also has a camouflage power.  Miles studies his powers with his best friend Ganke Lee and the two decided he had acquired the powers of Spider-Man.  Miles was not happy about this and sought to keep his powers hidden so he could live a normal life.

A few months go by and Peter Parker's version of Spider-Man is killed trying to rescue his family from Oscorp.  Miles is overridden with guilt as he realizes that he could have used his powers to help Peter Parker.  He decides to take up the mantle of Spider-Man and also the ethos of  "With great power comes great responsibility."

Miles's tenure as Spider-Man begins with a fast start as he takes down the villain the Kangeroo.  He is and is eventually apprehended by Jessica Drew/Black Widow and SHIELD.  SHIELD learns the story of his origins and begins to use him as an agent from time to time.  Jessica Drew also confronts him to learn who he is.  Jessica Drew in this world is Peter Parker's clone and rightfully suspicious of new version of Spider-Man.  Miles helps the Ultimates defeat Electro and earns the trust of SHIELD and Jessica Drew.

Uncle Aaron,  Training and Betrayal
Miles's uncle is the villain named the Prowler.  He calls over his friend the Scorpion and the two villains give Miles a video of Spider-Man fighting.  They say that he should study his moves to get up to speed faster.  Miles also begins to train using his powers on his own.  At his uncle's behest he goes out defeats a rampaging Scorpion.  His uncle then shows him a Vulture suit that he has and discusses his plans of teaming up with Miles to take over the underworld.  Realizing his uncle only want to use him as super powered enforcer Miles refuses to help him.  The two battle with his uncle using Vibro Shock Gauntlets (Associated with the Shocker).   In the end one of the Vibro Shock gauntlets short circuits that Uncle Aaron is using backfire killing him.

Spider-Men:
Miles meets the Peter Parker from a different dimension.  After a short fight stemmed from confusion Miles brings a stunned Parker to the Triskelion to sort out what is going on.  Nick Fury informs this new Parker about the incursions and are causing universes to collide and destroy each other.  The two join forces to bring down Mysterio.  As the two depart Miles and Parker share a moment where Parker asserts that he approves of him as Spider-Man.

Spider-Verse:
Miles is recruited by a Spider-Man that he first mistakes for Peter Parker.  He later learns that it is the Superior Spider-Man (Otto Octavius).  As part of the Spider Army Miles goes universe hopping pulling together a vast network of Spiders from different universes.  This army shows up in the final battle against the Inheritors where the Spiders defeat the evil family.

Secret Wars:
Miles sneaks aboard Mister Fantastic's raft that is full of Super Villains.  This raft is then opened on Battle World where the villains escape into the frontier.  Miles later reveals to Doctor Strange that he had hidden on board. Miles has roughly the same Spider powers as Peter Parker with a few added new ones.

Venom/Stun Blast - Miles can fire blasts that temporarily paralyze his enemies or cause electronics to malfunction.  Miles has also been show to fire off a massive energy burst which may be tied to his Venom blast ability.  Miles once used an energy burst to destroy an entire Hydra facility that he was held captive in.  It is suggested that the energy burst could be caused when he under great duress.

Camouflage - Miles can change his skin and clothing color tones to match his background.  This allows him to sneak up or escape without his enemies detecting him.

Potential Powers?
Miles could be immortal due to the Oz Formula that gave him his powers.  Norman Osborn has said that Immortality was one of the side effects of the formula.