Reviews of all Secret War comics

This post is to give short, fast reviews of the different Secret War stories.  Some will have a longer review. 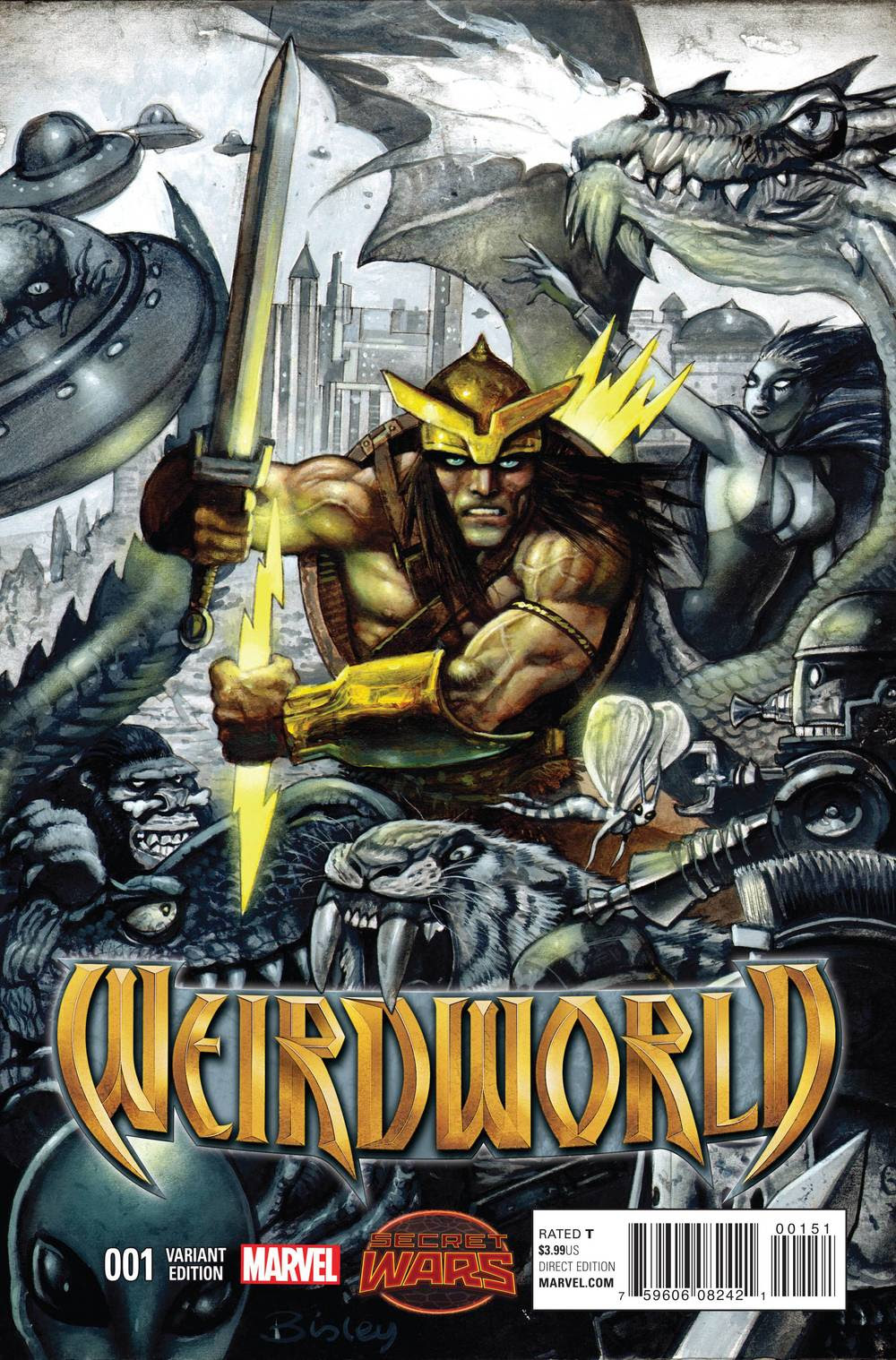 Marvel returns to sword and sorcory stories with Weird World #1.  Reviews have been very high on this story so far.

Review -->  Review: Future Imperfect #1 - great introduction to characters and twists at the end

Overall, I thought this was a good introduction into the world of Dystopia and Maestro.  I also felt that Ruby and Maestro and their battle were introduced effectively.  I liked the twists at the end as well.  The story did not feel complete but that is to be expected with a #1 book. 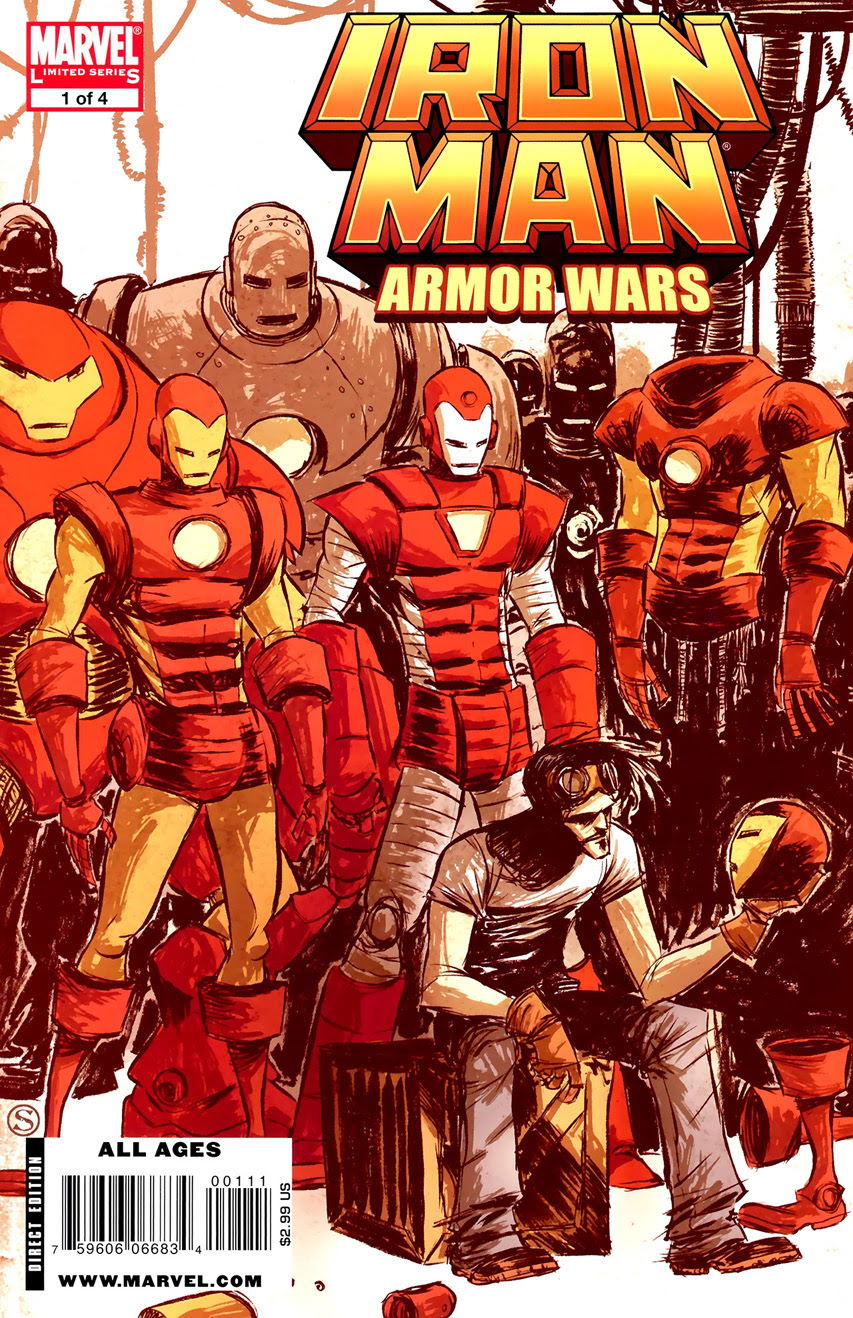 Overall,  I liked this first book it did not have enough space to fully develop its characters and themes but it did successfully introduce them and added a bit of mystery.  It is a solid first book in what is a very interesting take on a classic Marvel tale.   The mysterious murder of one of super powered denizens also adds a Watchmen styled "Who Done It?" element that will serve the series well going forward.

Secret Wars has a zone where the Marvel Civil War never ended.  It seems like it will be a great way for new Marvel fans to get caught up on Civil War before the Captain America film. 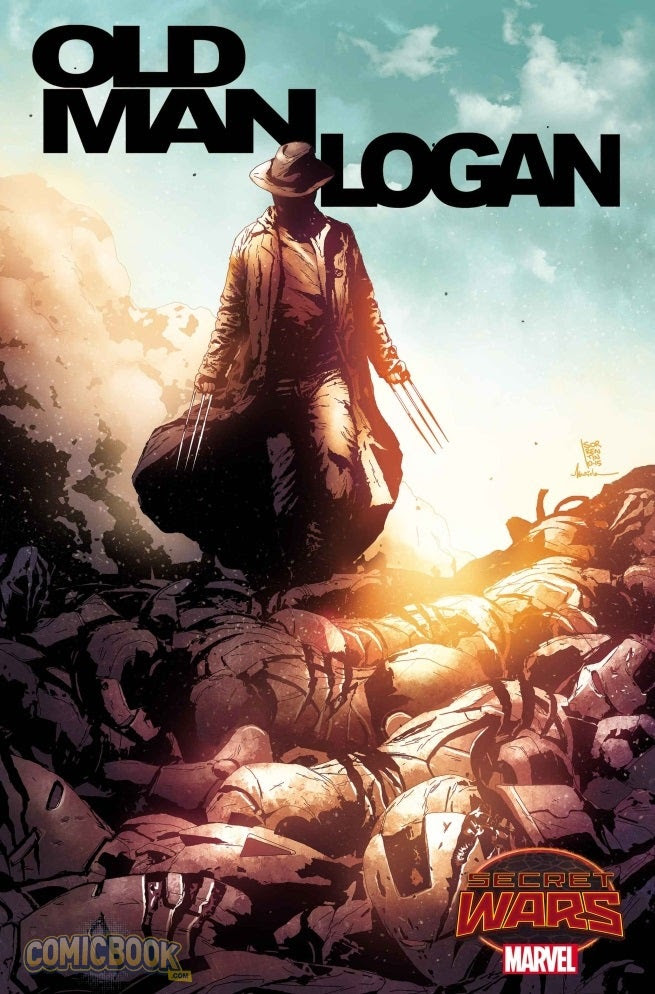 Violence, beauty, sadness, love this is poetry in a comic book.  Read it.

Old Man Logan #2
Logan attempts to cross the barrier around his zone.

This is the tale of the 2099 Universe in Secret Wars it focuses on the 2099 Avengers.  This is the first appearance of the 2099 Avengers.  This group of Avengers is interesting they are heroes sponsored and controled by the Alchemax corporation.  They include a female Captain America, a new Iron Man, a Hawkeye that looks like Angel, a new Black Widow, and Hercules.  In the issue Hercules begins to hit a little too hard on a woman he saved and he gets thrashed by Captain America for it.  This calls into question the team dynamics.  The final scene hints at another team that may crash the Avengers parade another super team called the....Defenders. 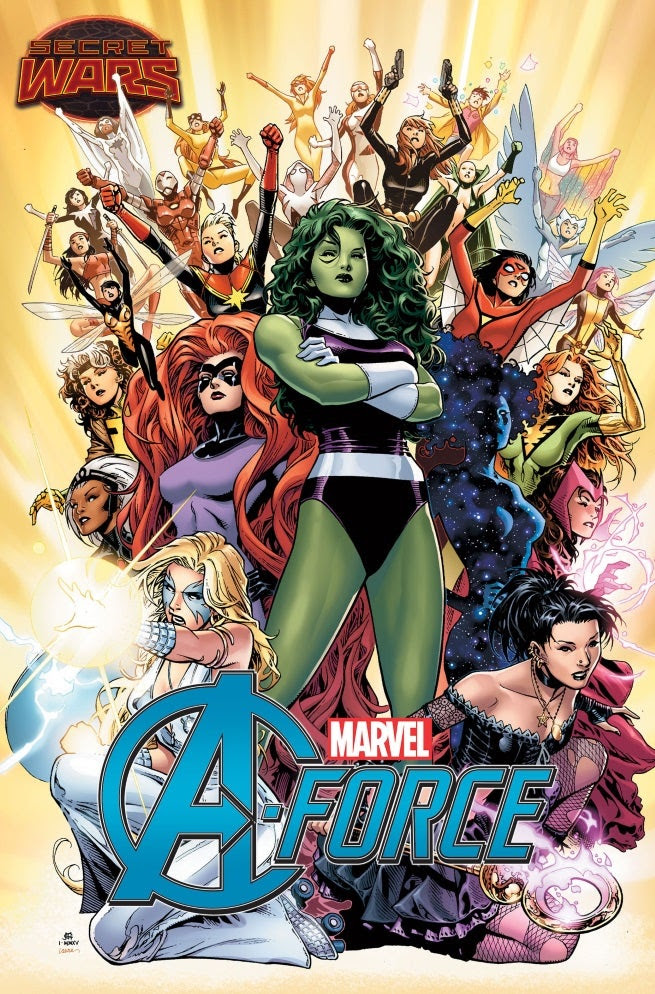 This series features an all female fighting force against the lamest of foes.  The story never seemed to be begin nor the motivations of any of the characters flushed out.  I found it very mediocre.

Full Review --> Secret Wars #1 Review the End of the Marvel Universe is HERE!

The series begins as the Marvel Universe ends.  The story of how this occurs is somewhat complicated and it does not explain it.   It is full of characters and never sticks to one long enough to create a full filling narrative.  Despite these faults it's epic concept and focuses on final climatic moments of the the universe.  There are moments of such vast scale that it feel surreal.   Even though all readers know that the Marvel universe will return in some fashion, there are still moments of great sadness that wrench your heart.

This book begins 8 years after the events of book 1.  Something has survived a world that was created by Doctor Doom that he rules over as a God.
This story introduces the reader to the Thors who are an array of different Thors who form Doom's police force.
There is a group of diggers who find an artifact that could threaten Doom's narrative.  The artifact proves to be full of any greater dangers.

Where do all of our characters find themselves in this new world?  How does this world work?  These questions begin to be answered.  It has an air of Age of Apocalypse but is in every way bigger and much crazier.  There is a realm of zombies, a realm of Hulks, a realm of....everything. 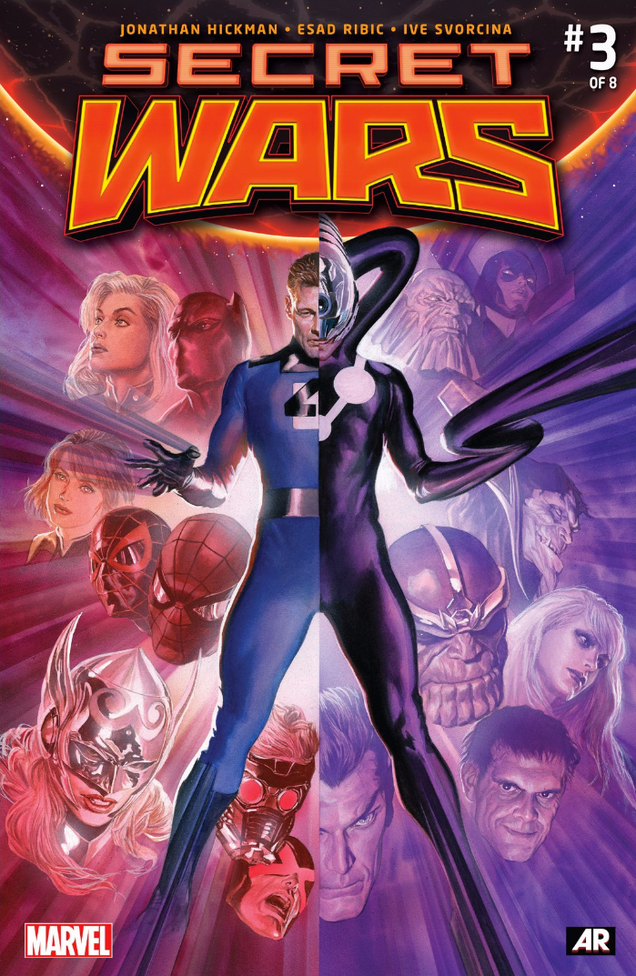 There are survivors of the old world appear and opposition to Doom appears from an unlikely source.

Two ships or life rafts have survived the final incursion.  Both were created by a different Mister Fantastic and both contained very different characters.  How will each group take Battleworld? 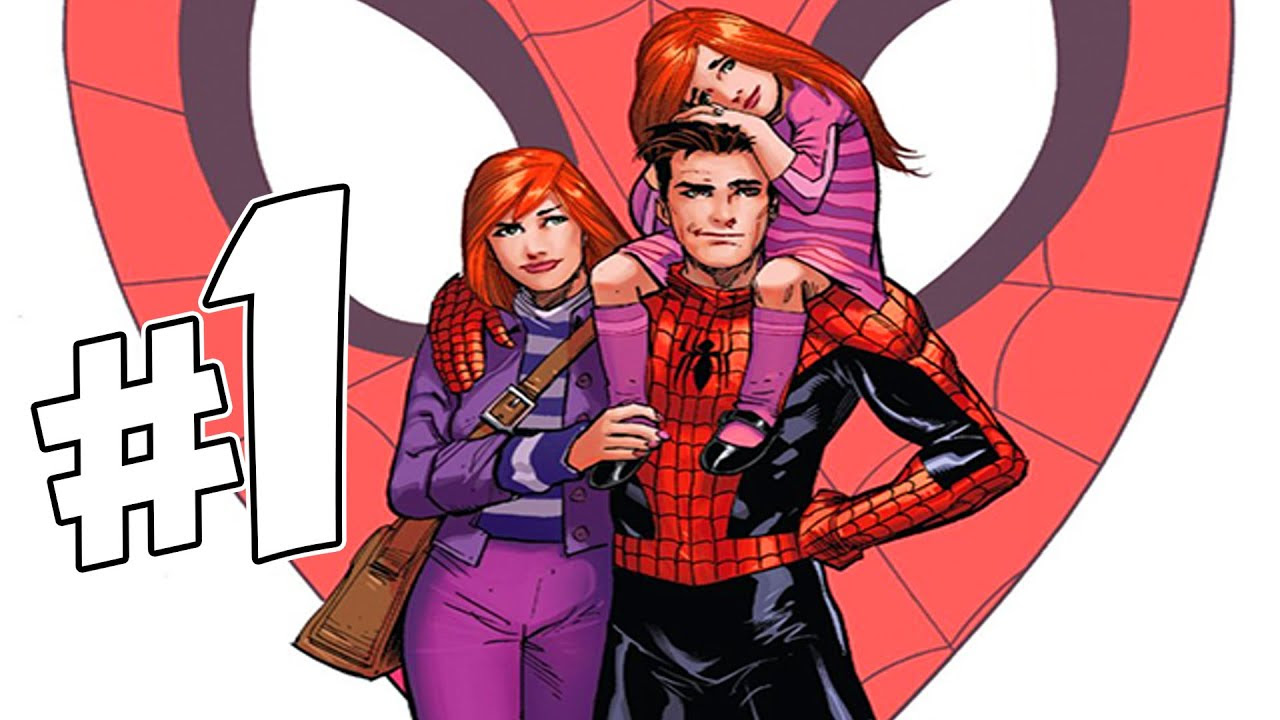 What is the zone of the Battleworld called the Regency?....

Wait that's not why you care about this.  You want to see why and how Peter Parker is back with MJ and who their daughter is.
This story provides everything that critics of Brand New Day said could have been.  We have a mature Spider-Man a mature Peter Parker who has had to grow up.  He is willing to make tougher decisions and greater sacrifices.....

I normally am not a big fan of Hulk stories.  I always think his interplay on teams is more interesting than his own tales.  I also do not always enjoy Captain America stories.  Well this crazy ass story features Captain America and an array of Hulks and is easily my favorite story of Secret Wars so far.  I'm struggling how describe the story without giving something away.....and I can't.  If you want to read something and just shake your head laughing in disbelief this is it.

All of the old favorite characters from the Spider-Verse tale have found themselves in a new world, where they don't belong.  Their memories are off with each experiencing a form of deja vu.  This is the tale of them finding each other and begin to piece back their lives.

Something about this story fell a little flat for me.  I think the next story that features Spider-Gwen rescuing Spider-Ham though has major potential.  Spider-Ham was a high point in the Spider-Verse event and he will likely pick up this one too.

This story focuses on the Avengers in Manhattan getting together both the heroes of the Ultimate 1610 and 616 universe.  Both groups do not entirely trust each other but manage to amicably get through a meeting.
The 616 Spider-Man expresses his worries about everyone in the 1610 universe known his secret identity.

Its an interesting meeting but very little else of note occures.

This book has two stories the first one is rather silly and the other is a dark one.

The first one has Blade battling a Daffy Dracula hybrid in New Quack City alongside Howard the Duck.  Its a funny tale that bizarrely seems to work.

The other one features the new Warmachine and Task Master in the gladiatorial arena known as the Killiesium.

The book fulfills its purpose of giving the reader different perspectives of Battleworld but little more.

Follow all the new Secret Wars developments on the Observation Deck!

Marvel after Secret Wars - The ALL NEW ALL DIFFERENT Marvel what does it mean?

Secret Wars #1 Review the End of the Marvel Universe is HERE!