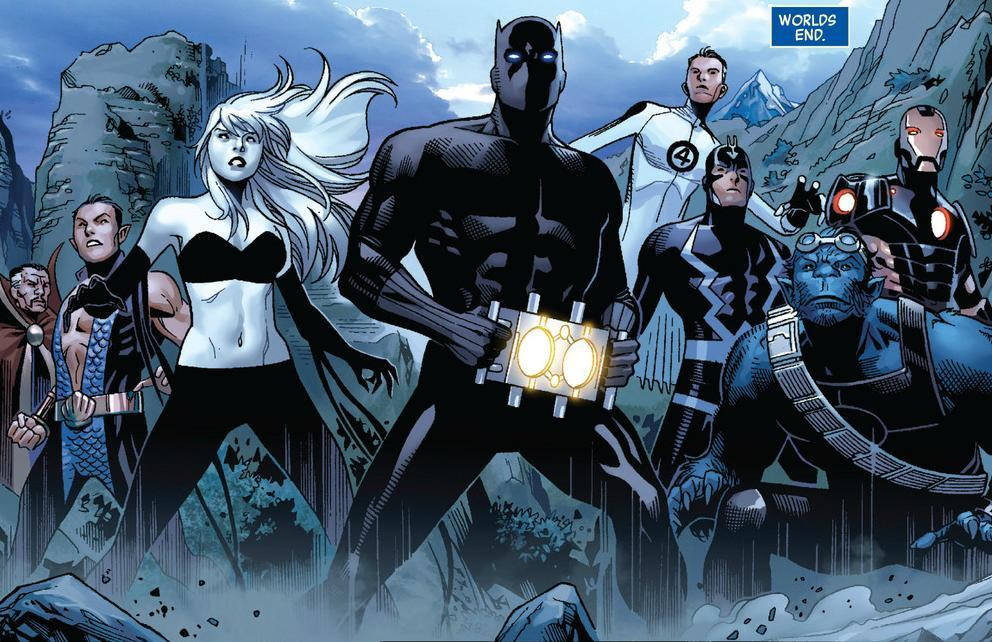 The build up story toward the Secret Wars event has been years in the making.  This means there is a lot of background story to this event.

General Summary Explanation:
The Marvel Universes have experienced a threat called Incursions where universes were colliding into each other at the physical point of Earth.  The only way for both universes to survive was for one of the Earth's to be destroyed.  If one Earth was destroyed it would pass right through the other and each universe was saved.  If not both entire universes would be destroyed.   Once an Earth was destroyed it would be safe until ran into the next Universe at which point it would face the same threat.

The heroes are confronted by a few different groups as they battle incursions.  The first are the Black Swans a pale but powerful people who worship The Great Destroyer Rabum Alal.  This group seeks to eliminate other worlds marked out by Rabum Alal as a sacrifice to him.  This group also discusses other groups who go about destroying worlds.

The heroes debate about building a device that can destroy worlds.  Captain America says they should not do this even just as a science experiment because having the device will lead them to use it. Rogers ends up being mind wiped and kicked out of Illuminati.

The Black Priests and Mirror:
Under the tutelage of the character Black Swan the Avengers begin to learn more about the incursions and construct a device called a Mirror that allows them to see other dimensions where Incursions are taking place to learn.

Upon completion of the Mirror the group is horrified as they watch a new group called the Black Priests descend upon and destroy a Earth.  This group easily destroys that worlds Illuminati with what they call words.  When one of their helmets is knocked off it has no head but only a symbol.  They are some form of artificially created construct.

They also the map makers, black swans descend upon other Earths destroying them.

Black Panther begins watching and cataloging each of the incursions looking for the means to stop them.

Meanwhile Doctor Strange goes to magical market called the Sinners Market.  He is asked what he wants to purchase there he says he wants the power to move worlds.  He is lead to place where he can sell portions of his soul for a portion of absolute power.  When asked how much of his soul he wants to sell he says "All of it."

The Cabal the end of The Justice Society

The Illuminati come to battle a group who had successfully fought off two incursion attempts.  This group is modeled after the DC Justice League.  The two groups battle with Doctor Strange and his new awesome powers being the deciding factor.  The world is destroyed and Earth is saved.  However, the heroes have a crisis of concience over the terrible thing they have done.

This leads to the creation of the Cabal.  The Cabal is a group of super villains who are willing to destroy worlds and do not have moral dilemmas. Eventually, though the Worlds of the main Marvel universe 616 and 1610 collide and neither group of heroes is able to trump the other.  This leads to the end of both worlds.

However, from the nothingness that follows a single face emerges that of Doctor Doom.  Who some how gained enough power to recreate the universe using the relics of past universes to create Battleworld a new planet made up of many different universes.

The Game of Worlds groups that lead up to Secret Wars:
Who is Rabum Alal?