The Marvel Universe is OVER! Secret Wars #1 is here! 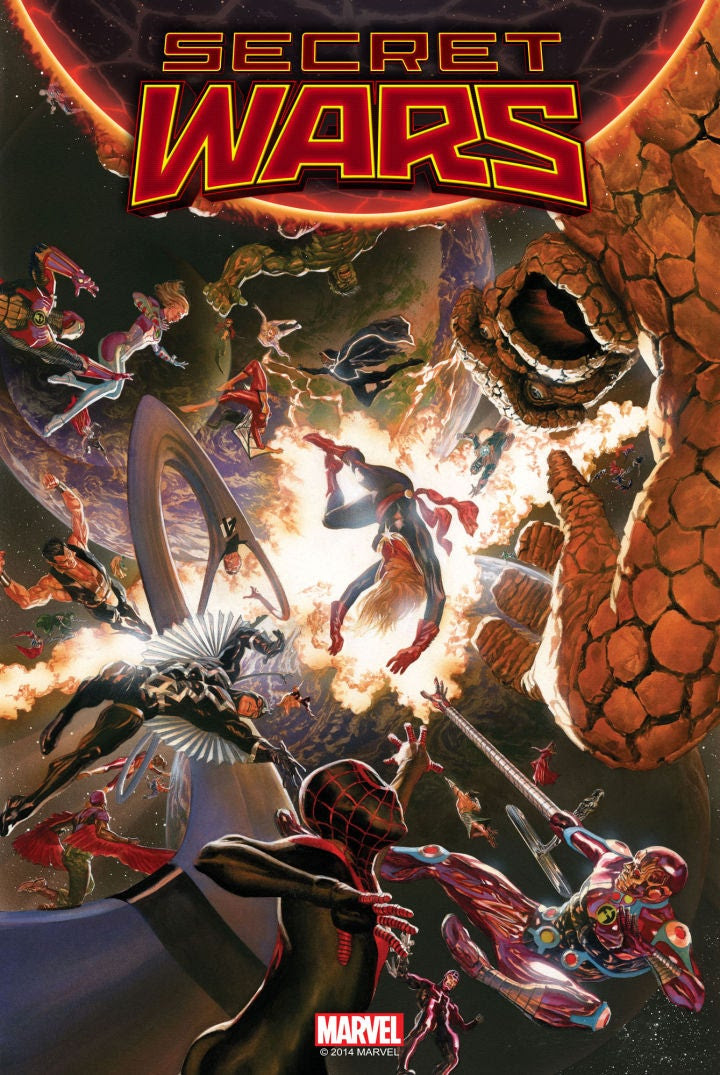 
Review:
Secret Wars delivers on bringing an end to the Marvel universe with a sense of crushing finality.  Even as we know many of the characters that die will be resurrected in some way, it still manages to pull upon emotional strings.  There is a moment in the end of the book, where a major death really hits the reader hard.  The book is a bit brutal in this way.

The book is also cryptic which keeps the reader guessing.  One could argue that it is also too cryptic and too hard to understand. I did mark the story down 1 because I feel it is very inaccessible to new readers.  The complicated history that led up to Secret Wars is not explained at all in the book.

Well we kind of know.  Somehow in some way or form a new world called Battleworld will be formed.  Battleworld is a giant hodge podge of different Marvel universes and timelines all crudely sewn together.


Related:
Follow all the new Secret Wars developments on the Observation Deck!
What is Battleworld? Lets take a tour of it!

Secret Wars is hard to explain in a simple one page article.  It has been building for a long long time!
For years now Marvel has been setting the stage for this mega event where its entire 616 universe and the Ultimate universe and every Marvel universe are destroyed.  The ground work has been laid out for years and finally we see the final convergence. Secret Wars starts in this awesome moment where the two worlds are getting ready to collide.   This is the moment where two Earth one from the Ultimate Universe and another from the main 616 face an imminent collision.  Both universes have prepared for to battle and attempt to destroy each other. It is for not though.  They collide and everything seemingly ends.  Many characters have been working very hard over many issues but here they all seem helpless.

Its pretty sad, but it gets sadder.  We see numerous beloved characters die in the convergence.

Then this is it no more of anything....Poof

Did you read Secret Wars #1?  What did you think?

Related:
Follow all the new Secret Wars developments on the Observation Deck!
What is Battleworld? Lets take a tour of it!
on May 18, 2015