FROM THE VAULT: Captain America #359 - First Appearance of Crossbones 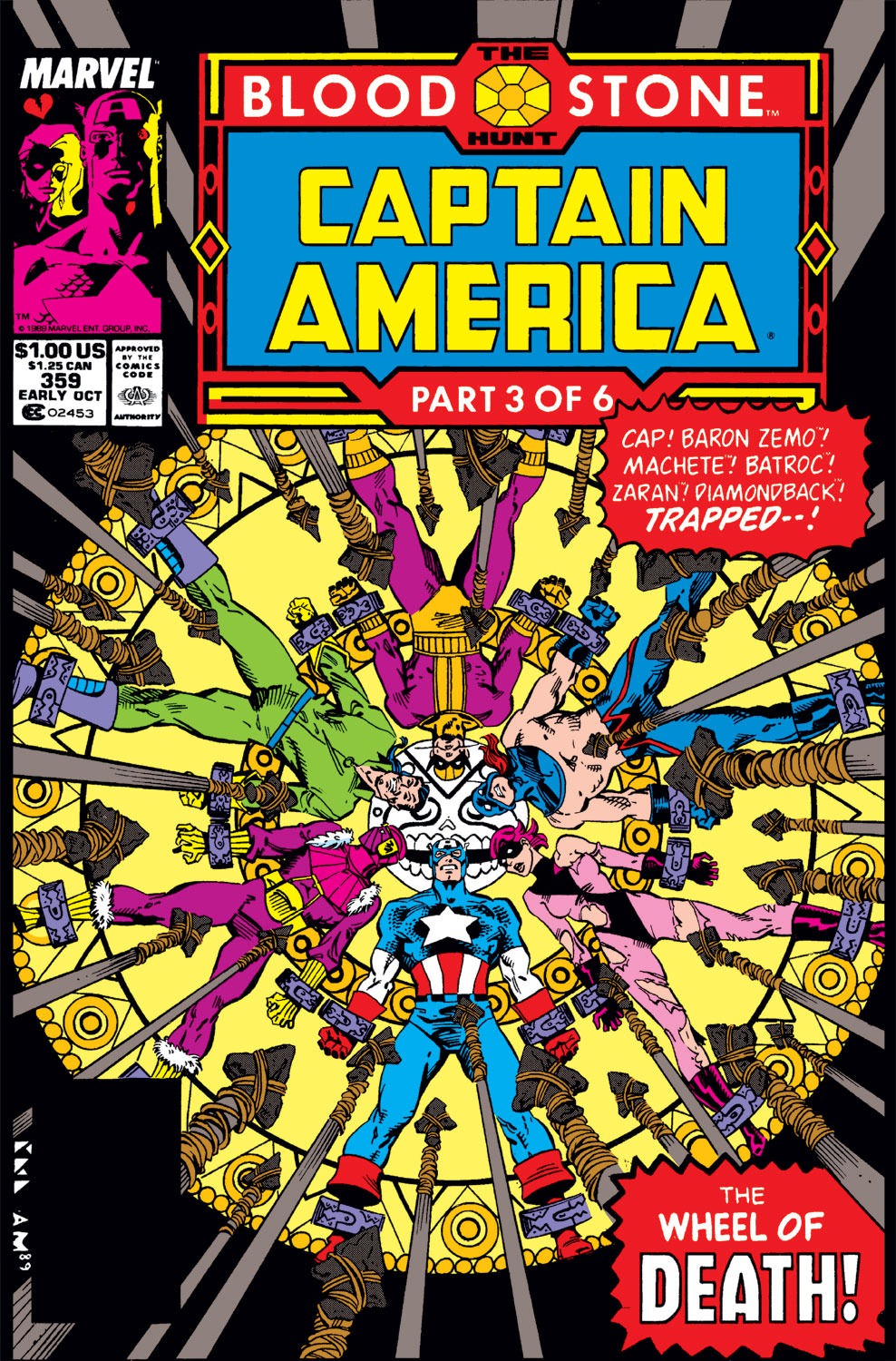 FROM THE VAULT:  Captain America #359 - First Appearance of Crossbones

Captain America #359 is famous for being the first appearance of Captain America's titular villain Crossbones.  The comic is also jam packed with other cool things though.  It takes place in a very famous Captain America / Zemo storyline where the two are are competing to find pieces of the mystical Bloodstone.   The whole Bloodstone story is a very fun adventure  and is still mentioned by many as one of the top Captain America stories.

Value:
Value wise this book is going up but not too much.  You can find a lot of reasonable priced ones around $15-30.  It will cost much more for a high quality copy.  The value of it may increase with Crossbones upcoming appearance in Captain America Civil War a movie that I predict will be huge.

The Story:
Zemo has assembled a team of Cap's baddies to locate the stones fragments.   This team includes Zemo himself, Batroc, Zaran and Machete.

Meanwhile, Captain America is paired up with the former villain, the beautiful Diamondback.  This is also part of famous ongoing tale of how Diamondback is in love / obsessed with Captain America.  Diamondback hopes that by fighting alongside Cap she can get close to him.....literally.  She doesn't do much to impress Cap in this book, other than running around in a shredded uniform.

The story begins with the heroes and villains being captured and put on a "Wheel of Death" by a lost Incan tribe.  The Incans want to sacrifice all of the white devils I think to their fragment of the bloodstone.  All of the characters on the wheel have been poisoned.

Lucky, for everyone on the wheel Captain America is able to accelerate his heartrate and metabolize the poison.  He escapes and throws a spear at the Incan leader, which creates enough confusion for him battle back the rest of the tribe.

When Captain America returns to the wheel he finds that the villains have all escaped with the fragment.     Diamondback is found passed out on the wheel of death.  She is disappointed that she was unable to help Cap and worries he will think ill of her.  A mysterious shadowy figure (Later revealed to be Crossbones) watches as Captain America takes off in a jet.

The good guys regroup on Cap's plane and they take off to the next Blood Stone site a sunken plane in the Bermuda Triangle.   There Cap finds Batroc, Machete, and Zaran swimming out of the plane.  Batroc shoots a shark and is swarmed.  This forces him to swim back toward the others, because Batroc can't take on a swarm of sharks underwater.

Funny note: I have heard many people mention this panel before.  Do you remember when Batroc fought the shark?  Well if you have heard about it, this is where it happens.


Crossbones First Appearance:
Crossbones is very hard to notice in this issue. He appears in the shadows looking on as Captain America takes off.  He has one thought bubble "Awww, Ain't that a shame".  Likely at the prospect of Captain America taking off before he can fight him.
This is really it for his first appearance just a brief shadowy profile, lurking in the trees.

Crossbones appears again in the rest of the story and makes major appearances in Captain America #362 and #363.  In these other issues he makes himself much more known.
It may surprise modern readers but in his first appearances Crossbones uses a crossbow as his weapon of choice and not machine guns.


All in all, this is a great issue and I recommend for collectors to pick
up.  It is part of a fun arc of Captain America and reasonably priced and will always be remembered for being the first appearance of Crossbones.

Who is Crossbones?
Who is Captain America?
Hydralab posts - The Only freaking posts you should care about!
Hydralab Cool Pix: Crossbones!
Marvel Villains Week!
on December 05, 2018