There has been rampant speculation on who the woman in the pool and the girl behind Thor in the picture above are.

It seems we may finally be getting some answers on the girl in the pool.  It was revealed as the film came out that there was actually no woman in the pool in the actual film.  She was actually cut from the film.  However, the scene is actually still somewhat important as it reveals some of what Thor's Subplot was supposed to be like in the film.

Avengers director Joss Whedon was being interviewed by Empire Film Podcast and revealed:

There was a 195-minute cut of this movie. The original scene was that Thor went to speak to the Norn and how it would work was that he’d go in the pool and the Norn possess him, basically, and Erik Selvig asks all the questions, and the Norn, speaking through Thor, give the answers. So Chris  got to do something different, and he really threw himself into it, and he did a beautiful job, but it wasn’t well regarded by the test audiences and I feel it’s probably largely because it was a rough cut with no effects, but also because it’s something that in a Thor movie would work brilliantly, but in this movie is just a little too left of centre.

Basically, the woman in the pool would likely have been this Norn.  From her Thor would have been possessed and revealed his visions on Ragnarok.

What is a Norn?

In Norse Mythology the Norns are principally 3 women who stand at the well of fate (Well of Uror) there they take care of the roots of Yggdrasil (the world tree) so that it does not rot.  The Norns are heavily associated with fate, destiny, time and events.
There are other norns in Norse mythology who go about causing good and bad events to happen.

Given this information what do you think of the changed scene?  Personally, I think the film would have made much more sense if they allowed Thor to meet the Norn and let this play out.  It also would have explained what this pool actually was (the Well of Uror / Fate).  The original scene would have also provided an interesting scene for Thor and Eric Selvig.  Selvig purpose in the final scene never made sense to me, but in this original scene it would have been explained.  Thor would have required a person to ask him question that knew a lot about Norse Mythology, and there is no better character in the MCU for this than Eric Selvig.

Old Ideas
Old Ideas on who the girl in the pool is:


Joshua Murcray posted some pictures of the mystery woman in the Agents of SHIELD forum and asked if she could be Raina after her transformation.   He also mentioned the Dora Milaje from Wakanda.

Ive read other ideas that include Inhumans, Alanteans, and Chitauri.  I think I have settled upon a few ideas that are most likely.

1) A Wakandan Dora Milaje - these are the warrior maidens that protect the Black Panther and also form up a pool of eligible women for him to marry.

3) A woman from a flashback.  Many Avengers are said to experience flashbacks when they encounter the Scarlet Witch.  Could this woman be part of someone's flashback?

If I had to choose I would say she is a Dora Milaje.  Her shaved head, lithe figure, and the exotic cave location all point toward a Dora Milaje.   If this is true then it is yet another hint that Black Panther could be in this movie.  Everything Marvel has officially said is that the Panther is set to show up in Captain America 3.  However, this movie is dripping wet with references to the Black Panther, just dripping wet.

Girl Behind Thor
There is also a female in similar garb behind Thor.  I tend to think the girl behind Thor is Asgardian and not related to the girl in the pool.

The Origin of The Black Panther?
Part of me is thinking is that what we are getting in this movie is the first part of the origin story of T'Challa (The Black Panther).  Ultron's attack on Wakanda could serve as the impetus for T'Challa to turn into a superhero to defend his nation.  Wakanda seems to already be used/terrorized by the villain Klaw who shows up in the trailer.  Now the Wakandans will see Hulk and a giant Robot rampage through their streets and Ultron attack them.  This could be the moment where T'Challa says enough is a enough and his people need a hero.  Maybe we don't see Black Panther, but maybe we see the reason why there is a Black Panther.

Related:
Avengers: Age of Ultron news and speculation
on May 31, 2015 No comments:

Fantomex made one of his most notable appearances in the Uncanny X-Force series. 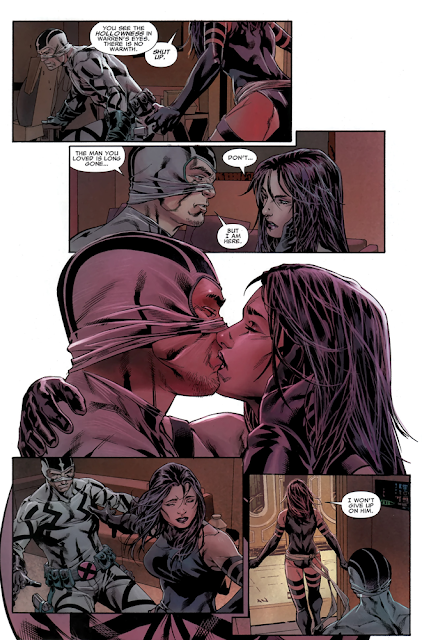 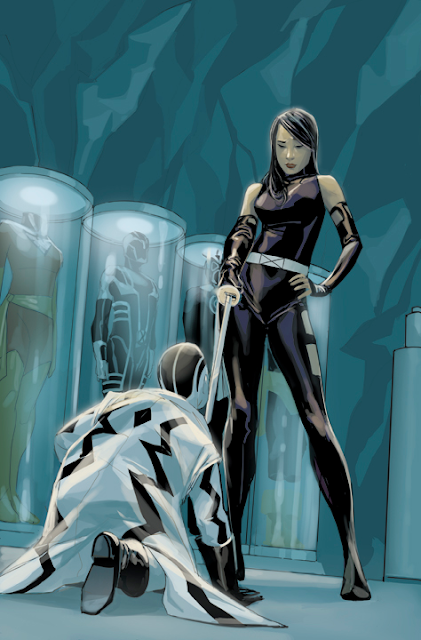 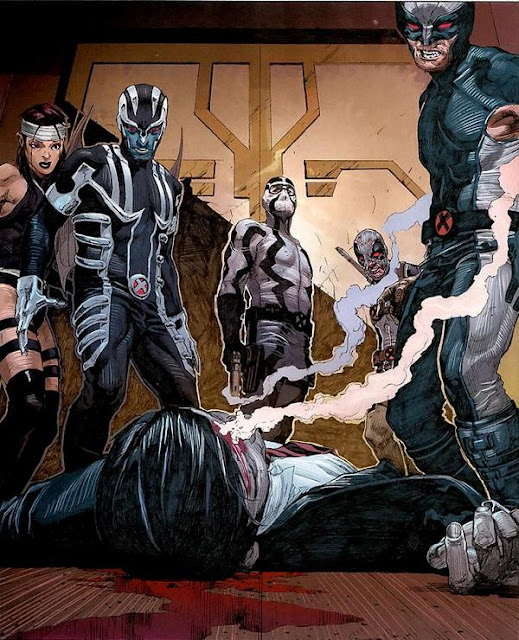 Related:
Shawn Crystal and his AWESOME Fantomex Sketch!
X-Men Films Hub -News, characters, and art
Who is Fantomex?
on May 28, 2015 No comments:


Denver Comic Con was full of an amazing assortment of costumed characters that were torn from comics, novels, games and films.  They invaded the mile high city from dragon realms and the mean streets of Gotham.  Often times as is the case of any large grouping of such a motley bunch a great big party ensued.

Here are some of the stand outs!


The characters from Dragon Age!
Yeah this one was cool!
This Harley was already getting ready for the upcoming DC series Bombshells!  A Harley Quinn in WW2 gear!

Two Face!
There were a lot of Harley Quinns at Denver Comic Con but I only saw one Two Face and she was freaking awesome!

A Dalek!
This awesome looking Dalek tried to destroy me but I was slightly too nimble.

There were many female and male Thors but I only saw one Angela, Asgards Assassin!

One of the many talented people I met at Denver Comic Con (2015) was Justin Ponsor.  Justin has done work on many titles but right now is most known for doing the color work on the Amazing Spider-Man in the Spider-Verse series.  Justin mentioned he was actually working on Comic Con weekend on the color work for the upcoming Secret Wars tie in "Renew you Vows" the Spider-Man title that teases a version of Spider-Man that is still married to Mary Jane and has a child.

I asked Justin what it was like to work on an event as awesome as the Spider-Verse and he said it was awesome.  He said that it was very challenging to keep all of the Spider-Men and their costumes straight.

Justin was selling prints of some of his work.  Check these pictures that he either did full or colors on: DC put together a couple of great panels this year at Denver Comic Con.  They brought out a great crew of writers and artists as well as previews of Flash and the Arkham Knight Video Game.

The creative group from DC included:

Overall this was a great panel.

My only issue I had with this panel was the room they were placed in.
For some reason Denver Comic Con gave them a small room and it easily could have filled one of the main ball rooms.  It looked like a couple hundred or more people were turned away.  I hope Denver Comic Con rectifies this next year.  If DC is willing to bring out some of their big guns they deserve a big room.  An event that combines all of DC comics, video games, and tv programming is going to bring in a big group of people.

A few questions on a lot of people minds is whether some of the old Pre 52 characters could appear after Convergence.  The answer from DC seemed to be yes.

Jeff King writer of Convergence said specifically;
“Every character will now be available to storytellers. We won’t see them all right away, but we will have the opportunity to bring them together again”

King went on to describe the build out of the series.  How Brainac went through the multiverse and effectively collected cities and characters that now are combined in convergence.

I think the result of Convergence could allow DC to keep the new 52 but also bring some of its older characters.  I hear a lot from Superman and Oracle fans and my guess is that one way or the other we will eventually see the older version of these characters.

Jurgens revealed his next project is going to be a light hearted one focused on the character of Bat-Mite.  Bat-Mite is imp like character that possesses what seems like magical powers but is actually advanced technology from the 5th dimension.  Bat-Mite in this story believes he has "fixed" Batman and in Jurgen's words, “Now he’s going to go on to deal with the rest of the DC Universe”.  Jurgens promises that Bat-Mite's adventures are going to have very unexpected and humorous results. Palmiotti and Amanda Connor have received massive attention from the Harley Quinn series.  One of these things they are attempting to do with Harley is to take her out of Gotham.  This series teams up Harley with Powergirl as they travel into another dimension.  The art from Amanda Connor continue looks amazing I actually bought a print over the art above.
They also showed the cover for the 2nd issue of this series which featured Harley ducking/hugging Powergirl as the two were surround by laser guns.

Amanda Connor said that Starfire is seeking out a new and hopefully normal life in Keywest where she hopes she won't stick out with her orange skin too much.  Palmiotti promised that this would be a great issue for new readers to learn about the character.

Marguerite Bennet flat out sold the hell out of her Bombshells project.  The crowd seemed extremely enthusiastic over this one.  The premise is that in this Bombshells universe the female versions of the characters came before the male versions.  This alters the history and the females are main characters in the universe.  The art from the series also looks very striking, I am expecting a lot from this one.

I have seen a lot of Gamora cosplays here are some of my favorites.


Here is a Nova and Gamora COSPLAY that were both awesome 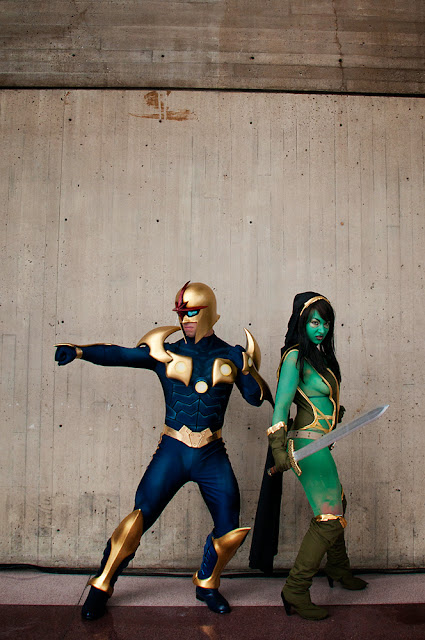 Another Nova and Gamora Couple

Here is a spooky Gamora Cosplay with godslayer 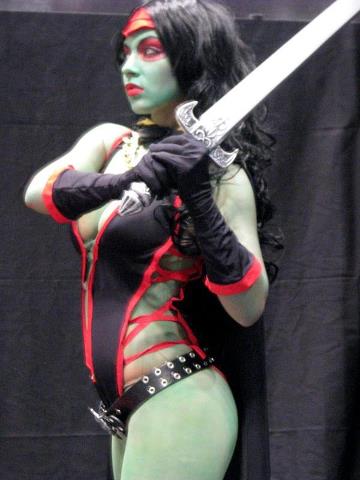 Callie has done some awesome Cosplays.  She really integrates great costumes, make up, with digital special effects to create epic pictures.  Callie hits the ball out of the park with this cosplay of Gamora!


Related
Who is Gamora?
Gamora cosplay by Kay Pike

Related
Who is Gamora?
Gamora cosplay by Kay Pike

Just like Rocket there have been some wonderful sketches of the deadliest woman in the galaxy the beautiful, Gamora.  There have also has been some awesome concept art released of Gamora by Andy Park and others.  Lets check out some of the best Gamora art out there!

Gamora by Andy Park: These were done by Andy Park as concept art for the Guardians of the Galaxy movie. 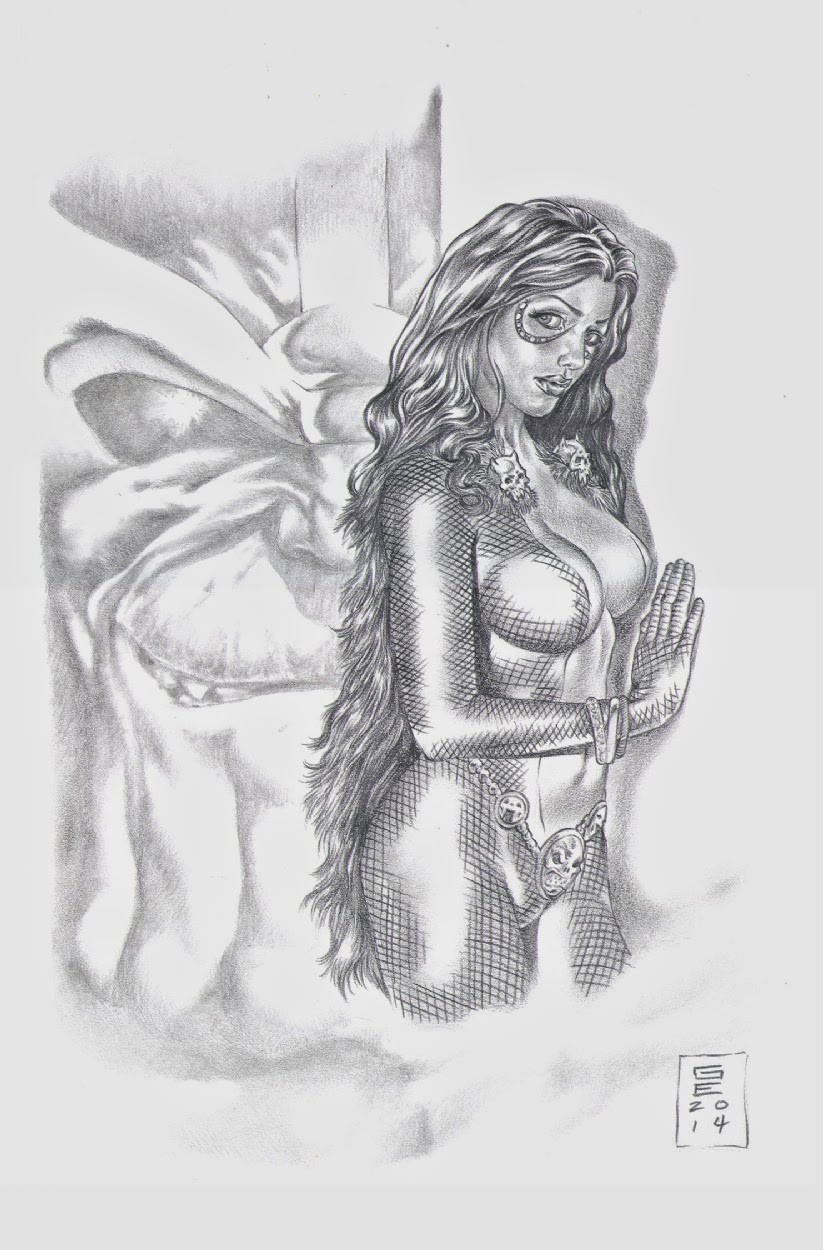 Related
Who is Gamora?
Gamora cosplay by Kay Pike
on May 21, 2015 No comments: