Who is Tigra?
Tigra is a character in the Marvel universe.  She is a woman who has been mutated into a human tiger hybrid.  She has a short crime fighting career before joining the West Coast Avengers.

Bio:
Greer is selected to wear a special cat suit that gives her special cat like powers.   The scientist of the suit was in fact a member of a hidden race of cat like people.   Greer then becomes a crime fighter using the suit.  Later Greer is badly wounded a group of the cat people come to her side with an offer.   Greer can choose to undergo a process of magic and science to become the Tigra.  The Tigra is the powerful, mystical champion of the cat people.   There have been various Tigras over the ages but only one at a time.  Greer agrees to become the Tigra and is transformed in a Tiger Human hybrid.  From this point Greer has some cat feelings, and powers.  Sometimes these feelings are helpful but other times they cause her problems. 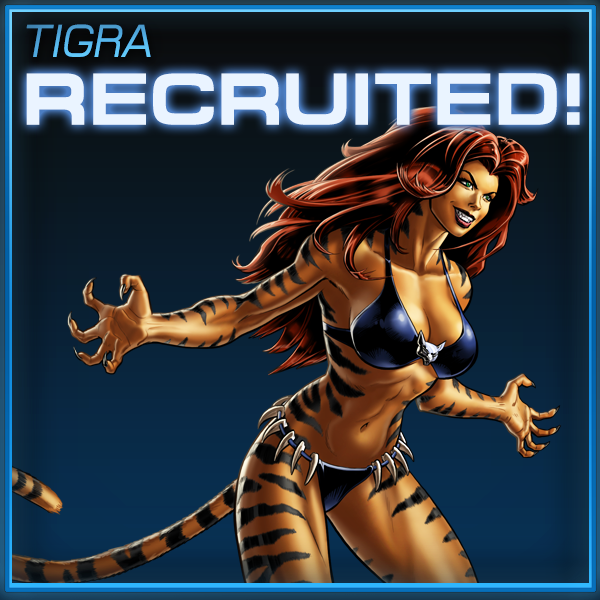 Tigra is one of the heroes summoned to the Avengers mansion by the telepath Moondragon and is recruited to join the team by Iron Man.  During this time the Avengers are attacked by Ghost Rider who uses his powers to bring out each members fears.  For Tigra this power has a lasting effect of making her feel inadequate.

Tigra is selected by Hawkeye to join the original West Coast Avengers Team.  There she battles the problems of her catside and feelings of inadequacy.  By West Coast Avengers #3 she nearly quits the team but a battle with Kraven the Hunter shows her that she still is a capable hero.  Her cat need for affection causes her to flirt with both Wonderman and Hank Pym.

The West Coast Avengers for awhile focuses on heavily on Tigra and her battle with the ultimate enemy of the Cat People a villain called Master Pandemonium.  During this time her powers are altered by the Cat People and her human and cat sides are better balanced.
During the rift in the West Coast Avengers over whether or not they should be able to kill, Tigra joined Mockingbird's pro killing.

Civil War/Secret Invasion/Dark Reign:
Tigra becomes one of the instructors at the government group called the Initiative.  She begins to have a relationship with fellow instructor Yellow Jacket and becomes pregnant.  Yellow Jacket was actually a Skrull imposter at this time but due to being imbued with Human genes at the time her child is half human and not half Skrull.   She goes on the run with the hero Gauntlet from the Initiative when it is taken over by Norman Osborn.  The Hood one of Osborn's righthand man savagely beats Tigra for not complying to Osborns demands.  Tigra is further scared away by  Norman Osborn asking to do genetic testing on her baby.  Tigra forms a group called the Avengers Resistance to battle against her former Initiative comrades.  In particular, she begins to stalk and savagely beat villains members of the Initiative.

Heroic Age and After:

Tigra gives birth to a normal cat person baby after only two months.  The short gestation period is due to her Cat Person physiology.  She leaves the baby to be raised by the cat people.

She is black mailed by a group seeking to profit of the tape of her being beaten by the Hood's gang.  Tigra outsmarts them by releasing the tape in full herself.  She does this as an olive branch to reach out to other survivors of trauma.  She has once again become an instructor this time at the Avenger Academy and has begun a relationship with Hank Pym. 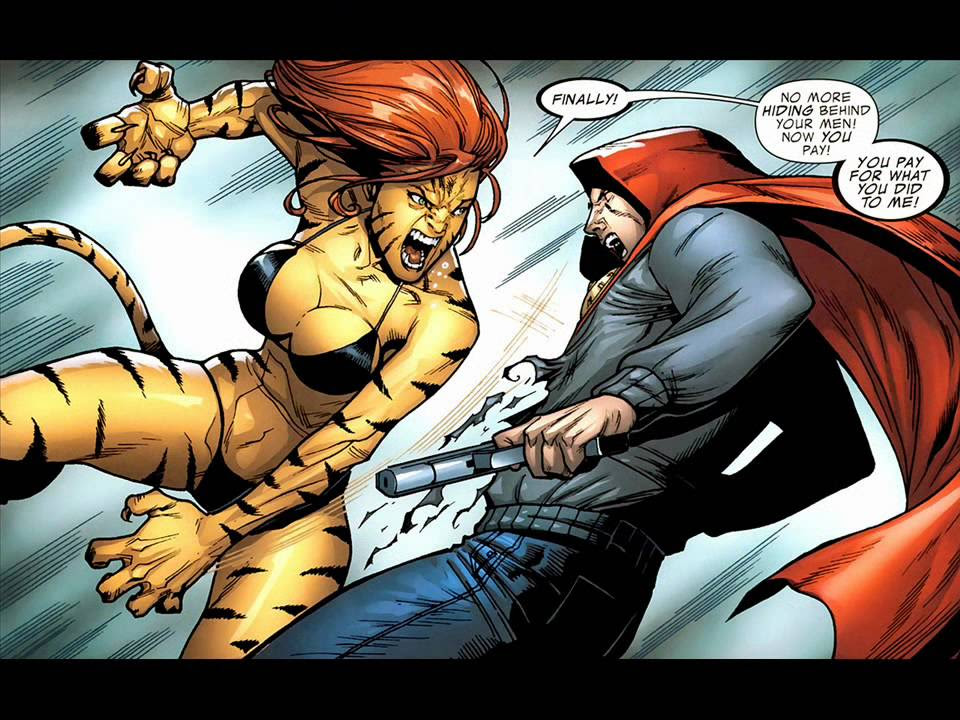 Feline human hybrid as the result of science and magic
Enhanced Strength, Speed, Agility, Reflexes
Razor sharp claws and teeth
Heightened senses - Can track people by scent, hear at wide range of frequencies, can see better than a normal human and has natural night vision
Padded Feet and balance allow her to travel silently, and also to land from great distances without injury
Cat skeleton provides greater resistance from injury

Tigra also has mystical powers and some telepathic powers that have largely not been explained.  She can telepathically reach out and feel living things emotional states.  Her mystical capability was such that she was one of the candidates to receive the title of Sorcerer Supreme.