The Thing aka Ben Grimm 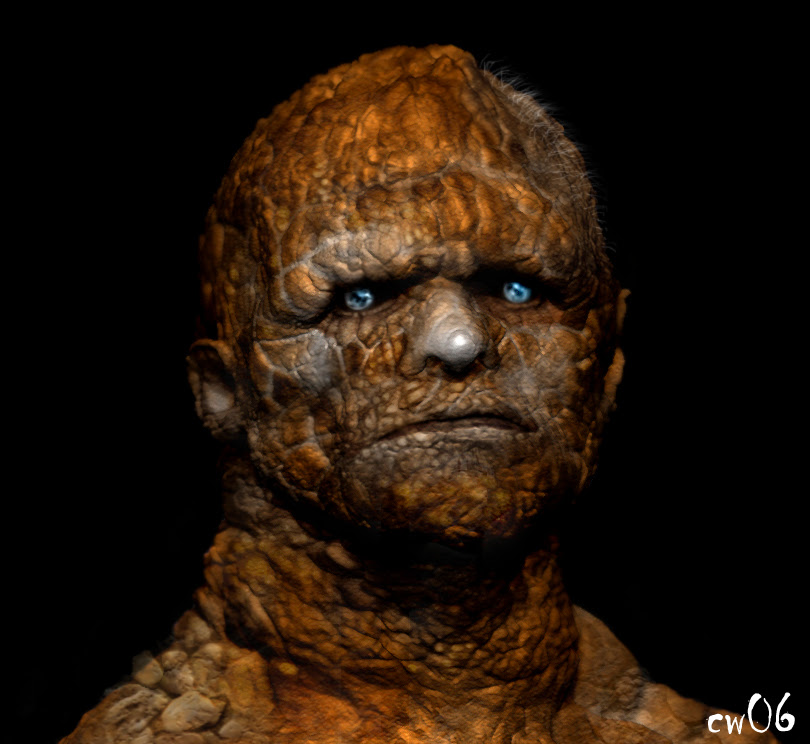 Who is the Thing aka Ben Grimm?

Catch Phrases:  "Its Clobberin' Time" is one of the most well known catch phrases in comics.  The Thing often utters it before engaging in battle.

The Thing in Multimedia:

Early Years:
Ben Grimm grew up in a Jewish home in Yancy street in the lower East Side of Manhattan.  He was a scrappy, streetwise youth in a poor neighborhood.  When Ben was 8 years old his idolized older brother was killed in a gang fight.  His parents are later killed and Ben goes to be raised by his Uncle Jake and Aunt Petunia.  Ben is a tough kid and as a teen becomes the leader of the Yancy Street Gang.

Ben leaves the gang as he begins to go straight and excels at football in High School.  Due to his football prowess he receives a full ride scholarship to Empire University.  At Empire University he meets his life long friend the prodigal genius, Reed Richards.  Ben hears Reed's dream of exploring the universe on a rocket and Ben jokingly exclaims that he would pilot the mission.

Ben goes on graduate with numerous engineering degrees and joins the Marines.  In the Marines he is a test pilot for the Navy.  He also flew missions directly under the the orders of Nick Fury.  He would then go on to join NASA as an astronaut.

Fantastic Four:
Ben is contacted by his old college friend Reed Richards.  Reed has built the space craft that he said he would during college and asks Ben to pilot it.  Ben agrees.  The project was nearly mothballed but the four crew members find a way to access the craft and take off.    Ben is initially reluctant to break into the ship but is convinced by Sue Storm whom he respects.

During the voyage the four are bombarded by cosmic rays and mutate.  Each member gains special powers.  Ben's powers and changes are the most pronounced of the group.  He gains massive strength, and rock hard durability but his appearance is monstrous. Ben has to deal with the changes, and his appearance.  Of all the members he is the most inclined to want to give up his powers.  Much of the early period of the Fantastic Four is spent with Ben trying to find a cure to is powers.  He also spends a great deal of time being angry at Reed for his mutation and feeling envy that the others maintained a normal appearance.  Eventually, Ben realizes he can do great good with his powers and reluctantly accepts them.  Once Ben was cured of his condition but then purposefully changed back to battle Doctor Doom.

He is known as the Fantastic Four's hot head, and is easily the most temperamental member of the team and but is also the teams best fighter.

As a super hero the Thing has battled many heavy hitters (Hulk, Namor, Doctor Doom) and is considered one of the best fighters in the Marvel Universe.  He is generally considered one of the most reliable members of the Fantastic Four but has gotten in trouble with his temper.  When gone from the team others have filled in for his role.  Those that have filled include Luke Cage/Power Man and She-Hulk

The Thing spends money earned from the Fantastic Four to build a youth center in his old neighborhood on Yancey Street.  His old Yancey Street gang plans to attack the place as they dislike Ben for leaving and are angered that he named the institution after himself.  When the gang learns that the Youth Center was named after Ben's brother Daniel Grimm who died in the gang they respectfully leave the structure alone.

Powers:
The Thing's skin is made of a flexible orange rock that gives him a variety of powers:

The Things skins has withstood powerful blows from heavy hitters like the Hulk.  He can also withstand gunfire.  The skin can be pierced though.  Wolverine was able to slice through his skin with his admantium claws and make him bleed.  The Rock hard skin does heal once pierced.

The Thing has three fingers and a thumb and these large rocky fingers can make it difficult for him to use fine tools, like dialing a phone, pushing buttons, or tying his shoes.

Skills:
The Thing is a master of a variety of fighting styles that come from both his street fighting days as well as martial training from the US military.

Highly skilled pilot and engineer - Though often portrayed as brutish the Thing is very intelligent with a high level of engineering background.

This Thing will not wear clothes he will walk around in the nude.  He also does not appear to be anatomically correct.


The film did very poorly in part due to a lack of action. 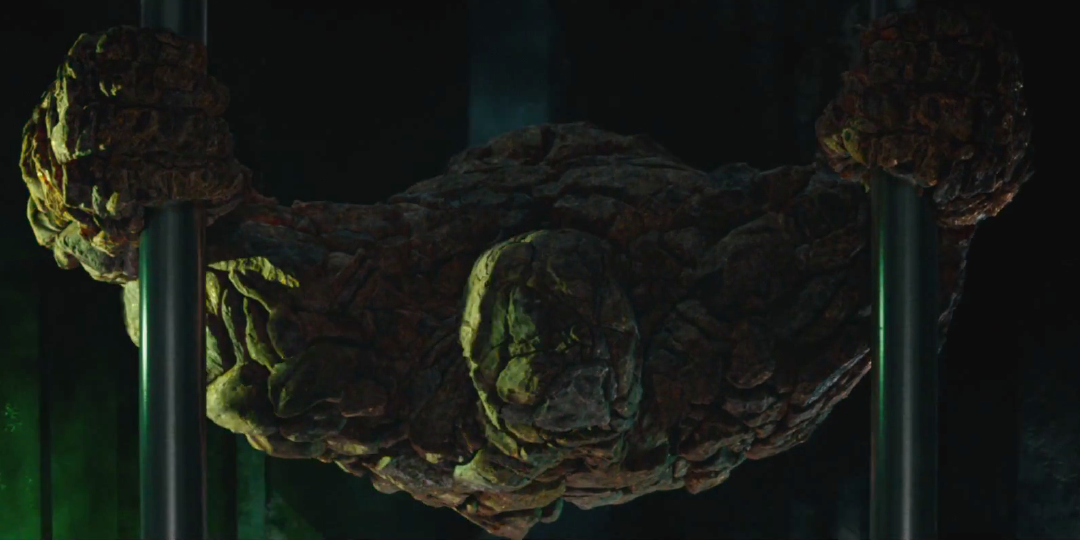 Interestingly a large action sequence that was hinted in previews of the Thing dropping from a plane then smashing a military force was cut from the film.  Entertainment Weekly found the scene description for the cut scene.

A Chechen rebel camp in the wee hours of the night. There’s no explanation for where we are, but there are soldiers speaking a foreign language, and they are loading up some heavy-duty weaponry. Crews are filling truck beds with the gear, preparing to mobilize – then a siren goes off. Everyone freezes, and one by one they turn their faces to the sky. A stealth bomber whispers by overhead, and a large object falls from it, streaking through the air at great speed. The object – a bomb, a missile? – collides with the earth in the center of the camp, sending debris is all directions. The soldiers take cover, then tentatively emerge and walk toward the crater, where there is a giant pile of orange boulders. Slowly, the rocks begin to move on their own, becoming arms, legs, a torso, a head …

This rock-figure lumbers out of the smoke, and the soldiers level their weapons – then open fire. As The Thing lurches into view, bullets spark and ping off his impenetrable exterior. Rather than some elegant, balletic action sequence, The Thing moves slowly and deliberately. He’s in no hurry. The storytelling goal was to show the futility of firepower against him as he casually demolishes the terrorists. It’s a blue-collar kind of heroism. When it becomes clear this rock-beast cannot be stopped, the surviving Chechen rebels make a run for it – and that’s when a hail of gunfire finishes them off. From the shadows of the surrounding forest, a team of Navy SEALS emerge with their guns drawn and smoking. The cavalry has arrived, but the enemy has already been subdued. The film would then have shifted to a bird’s-eye view of the camp, an aerial shot showing waves of American soldiers flooding in to secure the base. Just when it appears the American soldiers may be ready to clash with the rock monster, The Thing gives them a solemn nod, and they clear a path. He lumbers past them, almost sadly, a heartsick warrior. Then he boards a large helicopter and is lifted away.

Only then does the movie cut to that conference room, where Tim Blake Nelson’s Dr. Allen is crowing to his military overlords about how this mutated team of scientists is helping do the heavy lifting for America’s rank-and-file soldiers.


Interestingly, the cut scene may have also helped with the break in the film where it shifts to one year forward.  The break in the final cut felt jarringly abrupt.  Entertainment Weekly's source was  unclear whether the scene was not included due to decisions by Josh Trank or by Fox.  It has been suggested that it was filmed with a documentary camera style that may have clashed with the rest of the film.  It is also possible that Fox already knew the film was going to be a bust and did not want to pay for the special effects to finish the scene.