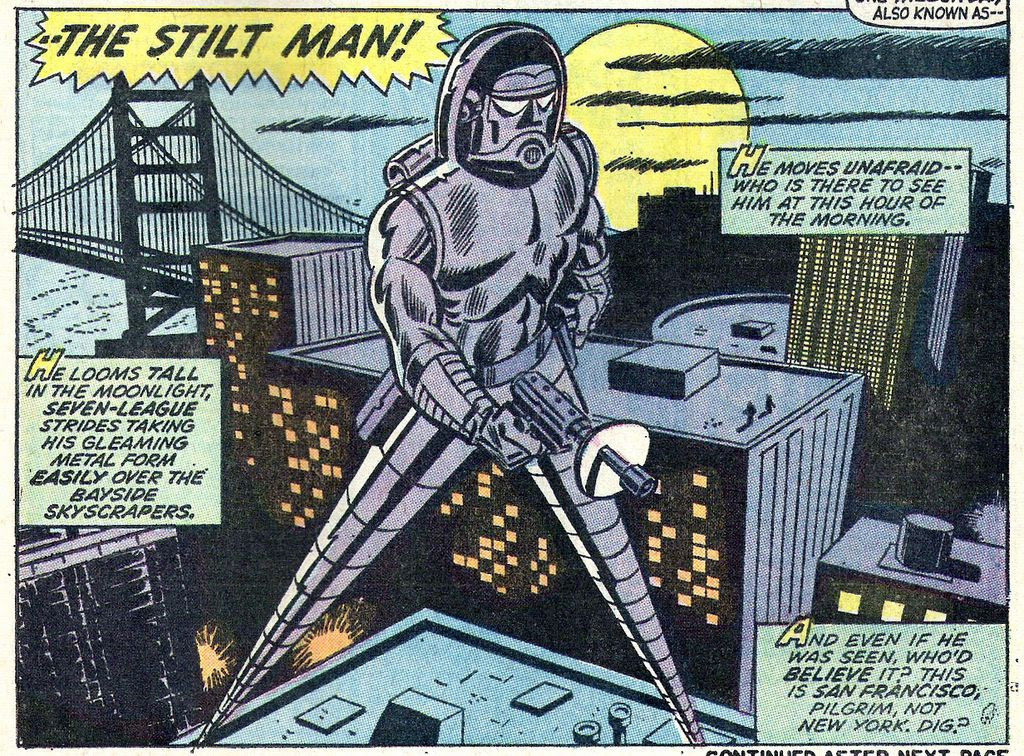 Stilt-Man is a villain In the Marvel universe.   He is known for using a suit with long telescopic legs.


Bio:
Wilbur Day is an engineer who steals a prototype of a hydraulic ram from his employer and converts it into a type of stilts.   On top of the stilts Day designs an armored suit.  The suit includes a variety of weapons and gadgets.   Day embarks on a criminal career using the name Stilt-Man.

Stilt-Man used his long telescopic legs to reach high points and rob out of reach areas.  He quickly ran into Daredevil and beaten.   He returned and battled heroes Daredevil, Spider-Man, Thor and Punisher.

Turk Barrett for a small time once stole the Stilt-Man armor and tried to become an assassin of the Kingpin.  He was brought down when Day informed Daredevil of a weakness in the armor.  This allowed Day to retrieve and further upgrade the stolen suit.

Day's suit was famously updated with Stark Technology as part of the Armor Wars event.  In this series Iron Man's technology was utilized by various villains to upgrade their suits and weapons.  Stark beat all the villains including Day.

Day quit his criminal career and even turned in his suit to Daredevil.  He was used as an enforcer of pro registration forces during the Civil War Marvel event.  On his first mission he came into contact with the Punisher who quickly paralyzed and then killed Day. 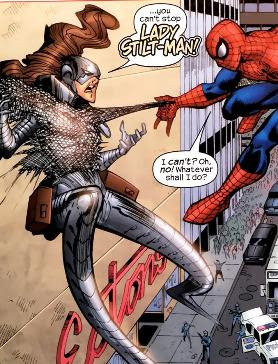 Since the death of Day three other Stilt-Men have arisen.  The first two were quickly dispatched and have yet to return again.  The final Stilt-Man is Lady Stilt Man she worked for Misty Knight's Villains for Hire group.  She has also been recruited into Max Fury's new Masters of Evil.


Powers:
Uses a heavily armored suit that has long retractable legs that allow him to reach high places.
Also has used a wide variety of gadget including one that allowed him to shrink others or himself.

A version of Stilt-Man's Suit can be seen in the workshop of Melvin Potter in the Daredevil Netflix Series.

THE Big Ol' Glossary of Daredevil Facts:
All Daredevil and Defenders Saga News!
The Hidden Secrets of Daredevil
Review of Daredevil Netflix Series
Avengers News
Who are the Chaste?