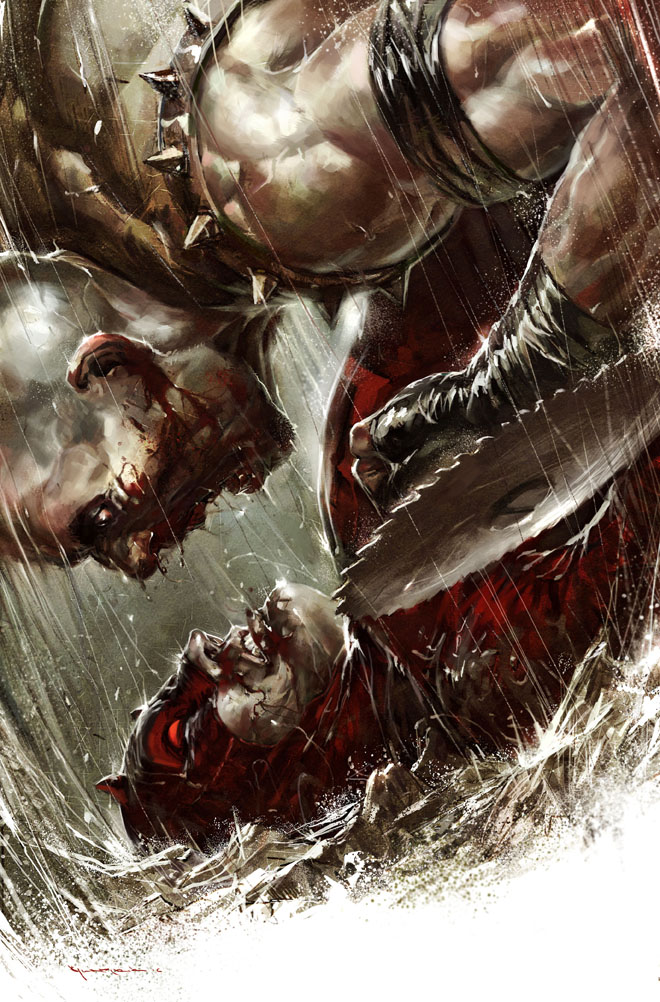 Gladiator is a villain who battles the Marvel hero Daredevil.  While strictly an evil person Melvin Potter at various times has engaged in criminal activity that have put him on the radar of Daredevil.

Gladiator News:
All Daredevil and Defenders Saga News!
Who is Daredevil?
Who is the Kingpin


Daredevil Store:
Toylab is a member of Amazon Affiliate Program where we help Amazon by find customers for their products.  When you click on a product it takes you directly to Amazon to make a purchase.

Gladiator is one of the first costumed villains encountered by Daredevil.

Melvin Potter is a costume designer who decides he can make more money as a criminal.  He creates a special suit of armor that includes spinning wrist mounted blades.  He trains heavily in martial arts.  He becomes a super villain using the name Gladiator.

Working as the Gladiator he is defeated by Daredevil.  After numerous failed attempts to beat Daredevil on his own he joins groups like the Emissaries of Evil and the Maggia for various schemes.  These schemes are always thwarted by Daredevil.

Eventually, Melvin reforms and goes legit.  He even becomes a vocal supporter of Daredevil.

Melvin has come to the aid of Daredevil in various ways to help atone for his earlier criminal activities.

Gladiator Powers:
Melvin Potter has no powers but he uses martial arts, armor, and is in peak physical condition.

Melvin's armor features spinning buzz saws on his wrists that he uses as weapons.


Gladiator in the MCU

Melvin Potter appears in Daredevil season 1 and 2.  In Season 1,  Daredevil battles him and convinces him to make a suit for him so that the Kingpin can be stopped.

In the background of one scene it appears the Melvin is working on the suit for the villain Stilt-Man.

Melvin helps Daredevil repair his costume in Season 2. These is an obvious reference to Melvin Potter and his gladiator suit.

Melvin Potter continues to help Daredevil in Daredevil Season 2.  In this season he helps reconstruct Daredevil's suit and adds the Daredevil bully clubs as weapons.  Melvin did not appear as Gladiator in the season 2 that seems to be set up for a confrontation in Season 3.

Kingpin will likely coerce Melvin into donning the Gladiator suit and going after Daredevil.