Who are the Chaste?

Who are the Chaste?
The Chaste are an organization of "good" ninjas and martial artists in the Marvel Universe.  They are often conflict with an evil group of ninjas called the Hand.


History:
High up on a cliff is the dojo of the group of the warriors called the Chaste.  The group was founded by Master Izo to battle a group of evil warriors called the Hand.  Izo had been a member of the Hand but left after the group fell under the influence of a demon.  With his new group he required the members to be pure of heart.

The group has had numerous battles against the Hand since splitting from the other group.  Izo's erratic and often reckless behavior eventually led to him stepping down.  In his place the gifted the blind martial artist Stick.  Stick is responsible for training Daredevil, Elektra, Wolverine, and Black Widown in martial arts.

Joining - To join the Chaste a new recruit is forced to climb the cliff to their bases location.  Many have presumably died attempting to join the group.  Once they have made it to the dojo the new recruits are subject to arduous physical and martial training.

The members of the Chaste are all great warriors and in many times also have advanced mystical abilities. 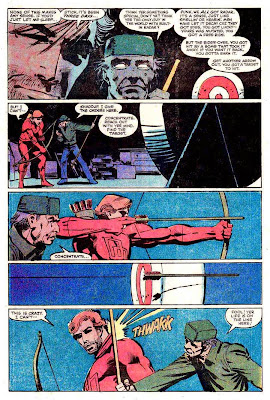 Chaste affiliated characters:
The assassin and sometimes leader of the Hand, Elektra was trained by the Chaste.  She was kicked out of the order due to her vengeful nature.

Both Wolverine and Black Widow have received additional martial training from the Chaste.

TV and Film:
The group was shown in the movie Elektra with Jennifer Garner in 2005.