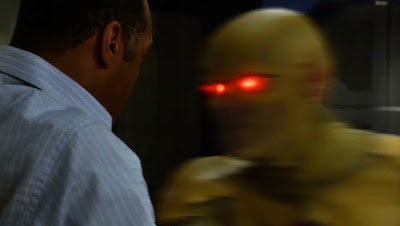 We thought we knew all about the Reverse Flash but a new twist was revealed last night.

Harrison Welles is NOT the Reverse Flash....Wait What?

The character of the Harrison Welles had previously been revealed to be the Reverse Flash, but he also mentioned that his real name in the future was Eobard Thawne.   This was explained last night as well as a lot of the time travel elements that have been building in the show.
Eobard Thawne is battling his time lines version of the Flash.  A Flash that began his crime fighting career much later in 2020.  Eobard travels with the Flash back in time to kills his mother which he does.  This Flash is actually battling with him the entire time.  However, once Barry's mother killed the other Flash disappears and  Eobard loses access to the Speed Force.  Without the speed force he can not travel through time and effectively stranded in our time.

Eobard then hatches a scheme to get back to his own time.  First he seeks out and takes the place of....Harrison Welles as in the real Harrison Welles.

Now Eobard has successfully created a new Flash to get the Speed Force going all so he can travel back into his future.


Characters:
Who is the Flash - Barry Allen?
Who is Gorilla Grodd?
Who is Captain Cold?
Who is Harrison Welles?
Who is Eobard Thawne / Professor Zoom / Reverse Flash?
Who is Weather Wizard?
Who is Mirror Master?
Who is the Trickster?