Is this the end of Rick Grimes? 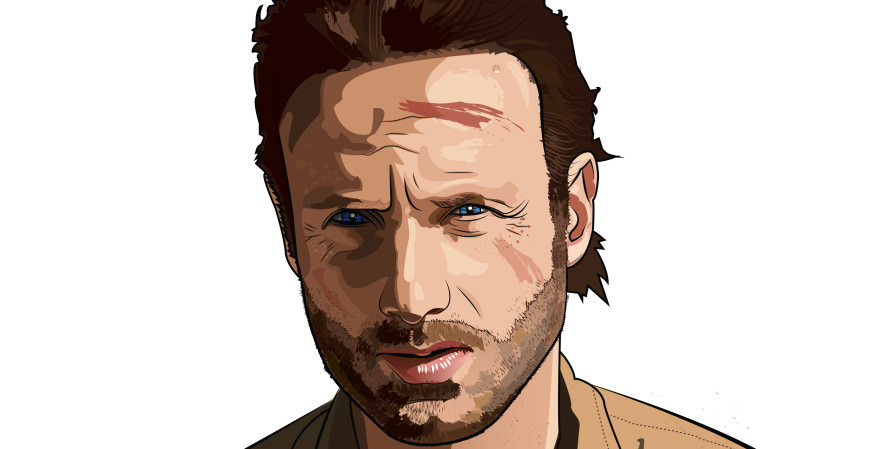 Who is Rick Grimes?

Rick Grimes is the main character and protagonist in the comic and TV show of The Walking Dead.  Rick is played by the actor Andrew Lincoln.

Rick Grimes to die in Season 9?

Collider has reported that Rick Grimes is likely on his way out during Season 9 of the Walking Dead.  Apparently Andrew Lincoln is only signed for half of the season.  Likewise Lauren Cohan who plays Maggie may have a more limited role in the future of the series.  This would be a departure from the comic series in which Rick and Maggie are both alive and also still very much leaders of the survivors.  There have been a variety of differences between the comics and the show but this would be by far the largest change.
Collider also reports that Daryl Dixon the character played by Norman Reedus would move into the main role of the series.

Brandon Davis has confirmed the news:

There will be some big exits this year. Other characters are going to see beefed up roles to carry the torch. I don't think there are plans of this being the final season. https://t.co/wwNEoS5vjU
— Brandon Davis (@BrandonDavisBD) May 29, 2018

Yes, this is true. Sat on the news out of respect but it's out there now... #TheWalkingDead #RicksFinalSeason https://t.co/aJJFkipRWh
— Brandon Davis (@BrandonDavisBD) May 29, 2018

One thing to note here is that Andrew Lincoln could leave the show and Rick could stay alive.  They could simply have the character played by a different actor.  They could also some how have Rick go MIA for a season or two and have Lincoln come back to play him down the road.  Lets face it though this is the Walking Dead and its a show that has no qualms with taking out its major characters.

So for now at least it seems Rick's time is nigh.

Rick Grimes is a Sheriff in Georgia.  He has a small family with a wife Lori, and a son Carl.  Unknown to Rick his partner on the Police force, Shane has begun his sleeping with his wife.  While on duty Rick is shot and ends up in the hospital and was placed into a medically induced coma.  Rick awakens to a bizarre scene.   He is in the hospital in a bed and no one is around.   The machine that had been feeding his body medicines and fluids had long since stopped working.   Pulling himself up and stumbling into the hall he finds even more bizarreness, the halls are empty, there are mutilated corpses on the ground.  He finds a barred door that is being rattled by what sounds like groaning people.  Words written on the door read;

Thus begins the journey of Rick Grimes into the world of the Walking Dead.  He meets a father, Morgan who fills him in on the outbreak.  Morgan, Rick and Morgan's son Duane break into a Sherrif's office and procure guns for protection.  Rick then leaves the two so he can find his family.

He goes on to find his family (Lori and Carl) and a group of survivors who to look at him as a leader.

As a leader of a group facing herds of zombies and other brutal bands of survivors Rick is forced to balance his morality with the requirements of survival.   He leads the group to multiple homes, through multiple wars and through a never ending sea of zombies.   New members join the group, and often die.   Rick develop trusted warriors and advisers but in this world death is always around the next corner.

He struggles with how to raise Carl in this new brutal world.  He wants his son to be strong so he can survive in it.  However, when Carl becomes cold and callous Rick worries that he has gone too far.  He tries to bring his son back so he can enjoy some of his childhood.  While not successful at returning his son's innocence he does manage to impart his values.

Despite the challenges of his world manages to keep his group alive with their humanity intact.

When he defeats the Saviors he makes the controversial decision of keeping the violent leader of the group Negan alive in a cell.  The act while dangerous serves to show that Rick is meaningfully different than other tyrants that have cropped up around the world and leads an aura of morality to his actions.   A fact not lost on Negan himself, who resents being held like a trophy.  The communities create a loose network that is held together primarily under the leadership of Rick even if he does not hold an official title.  The communities begin to encounter a large group of people who live amongst the walkers.  This group is large and violent and call themselves the Whispers.  The Whispers and Rick have a meeting where they agree on a rough border between themselves.  The Whispers have already killed people who had inadvertently trespassed into their territory.  The deaths already caused by the Whispers begins to lead into the event known as the Whisper War.

Image the company that produces the Walking Dead is selling #163 of the series for 25 cents.  The low price and heavy promotion of the series has made it the highest ordered comic in 20 years with pre orders from Diamond Distributors topping 730,000 preorders of the issue. The issue will begin a new arc in the series provocatively called "Conquered".  The series take up after the Whisper War is over and in the paradigm that exists between the communities and the Whispers.  There is a rumor that Rick Grimes could die in #163.

The All Things Walking Dead HQ
Toylab Cool Pix: Rick Grimes
Who is Deanna / Douglas Monroe?
Who is Jessie Anderson?
Who is Carl Grimes?
Who is Morgan Jones?