Who is Pete Anderson from the Walking Dead? 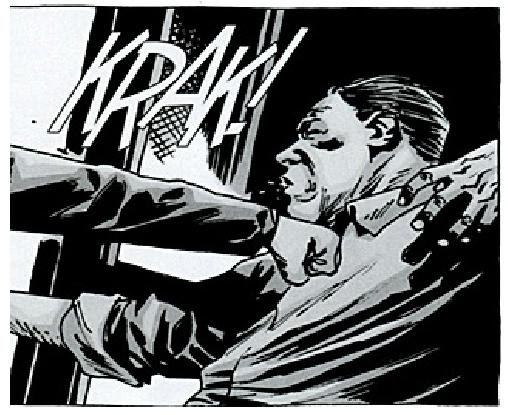 Who is Pete Anderson from the Walking Dead?

Pete Anderson is a character in the Walking Dead comics and TV show.  He is known for being an abusive Father and Husband and being executed by Rick Grimes. Pete's wife notably goes on to have a romantic relationship with Rick.  Pete is the only person that Rick Grimes has killed from Alexandria.

Comic:
Pete and his wife Jessie live in the Alexandria Safe Zone with their son Ron.  Pete is a doctor and is well respected in the community.  At a welcoming party Rick notices that Jessie looks morose and that her son Ron has a black eye.  He is able to put together the signs that her husband Pete is abusing her.  Not willing to stand for this he intercedes.  Rick ends up confronting and eventually killing Pete.  The move initially creates friction with the Alexandria residents.   However, when they learn that Pete was abusive they back down.  Some residents knew that Pete was abusive but were willing to tolerate it due to the fact that he was a doctor and considered too valuable.

Rick knocks out Pete and then takes Pete's family away to safety.  When Pete finds his family missing he grabs a knife and heads toward Rick.   He is stopped in his path by the Monroe's and Heath.  He asks the group to help him "Kill Rick."  They refuse.  Regina Monroe asks Pete to calm down which infuriates Pete even more and he slashes her throat.  Horrified at what Pete did to his wife, Douglas Monroe gives Rick the green light to kill him and he does.  Rick shoots Pete in the head, executing him. Pete's family is shown as having a family similar to that on the comic.
Pete appears on his porch, and someone eerily greets Rick for the first time.  He gruffly tell Rick to come in for a check up sometime.  On the TV show TalkingDead the Pete was described as being a Porch Dick and #Porchdick apparently trended online after the show.

At the Welcoming party Pete runs off supposedly to get drinks.  Jessie and Rick share a moment when he gives her a small kiss on the cheek.
Pete bizarrely walks into Rick's house while drinking and tells Rick to bring his children over for a check up.

Carol sees signs that Pete is abusing his son Sam and likely Jessie.  She tells this to Rick.  Rick seems to have already sized up Pete as being a potential issue.

There is also signs of a group similar to the Scavengers around Alexandria called the Wolves.  In the comics this group attacks Alexandria right after Rick confronts Pete.