Who is Francine / Holly on the Walking Dead? Who is Holly / Francine on the Walking Dead?

Holly is a character in the Walking Dead comics known for being the lover of Abraham.  In the TV show Holly appears to have the name Francine.

Related:
The All Things Walking Dead HQ
Who is Abraham Ford?

Holly / Francine is a resident of the Alexandria Safe Zone community.

Holly is working on the construction crew led by Tobin.  The construction crew is installing new walls when walkers attacks.  Holly is stuck and Tobin orders everyone back.  Abraham Ford refuses to leave a man behind and charges forward into the fray.  He kills many zombies and rescues Holly/Francine.  Tobin asks Holly to back him up on the crews on policy of retreat.  She responds by kicking him so hard in the testicles that he vomits.

From that point on Abraham and Holly begin seeing each other romantically.  At first they hide the affair from Rosita.  Eventually, they tell her and she moves out of Abraham's house so Holly can move in.  Abraham calls Holly his true love.

Abraham is killed by a group called the Saviors.  When the communities go to war against the Saviors Holly is on invasion force headed to their main base called Sanctuary.  There she offers to knock down the gates of the fort on a suicide mission.  Rick tells her no, but Holly kicks him the testicles so hard that he pukes.  She then gets in a car and crashes through the Saviors gates. 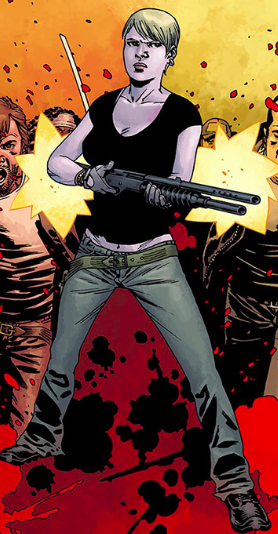 Negan the leader of the Saviors at first thinks she is Rick's girl, Andrea.  He hopes to use her as a weapon against Rick.  She tells Negan that he has the wrong girl.  He gets very angry.  A Savior attempts to her rape her but Negan kills him saying that is not what Saviors do.

Holly is given back to Rick with a hood over head.  When they pull off the hood they realize that Holly has been killed and zombified by the Saviors she bites a person before she is put down.

Francine is not original to the Alexandria Safe Zone but stumbled into it after a time of surviving on her own.  She was recruited by Deanna Monroe and assigned to the community's construction crew that adds wall and space to the community.

In the episode of No Way Out when a large herd breaks into the community Rick Grimes go out into the street to battle them.  Francine is one of the communty's members that is inspired and runs out to join him.