Who is Dr. Ravi from iZombie? 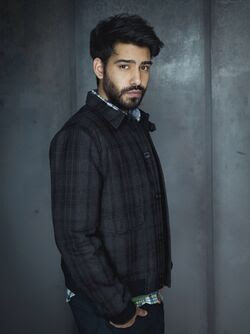 Who is Ravi from iZombie?
Dr. Ravi Chakrabarti is a character on the TV show iZombie.  He is played by actor Rahul Kohl . The character does not appear to be based off any of the characters from the comic. Ravi is the only human who knows Liv is a zombie.

In the first episode Ravi confirms his suspicion that Liv is a zombie by catching her eating brains of one of the Jane Does in the morgue.  He reacts in a positive way to this finding.  He forms a mutually beneficial relationship between Liv and himself.  He gets to study Liv's zombie condition and Liv gets an unlimited supply of fresh brains.

When Detective Babineaux enters the morgue to learn the identity of a Jane Doe he encourages Liv to use her Zombie visions to help out the detective.  He frames Liv's power as a psychic ability rather than a side effect of eating brains as a zombie.


He forms a strong friendship and partnership with Liv and has begun to research the creation of a zombie cure.

Skills / Powers:
Powers - None - Ravi is an ordinary human

Skills - Is a skilled forensic pathologist.


For more Zombie goodies check out:
IZombie News and speculation
Who is Gwen Dylan?
Who is Liv from iZombie?
The All Things Walking Dead HQ