Who is Daryl Dixon from the Walking Dead? 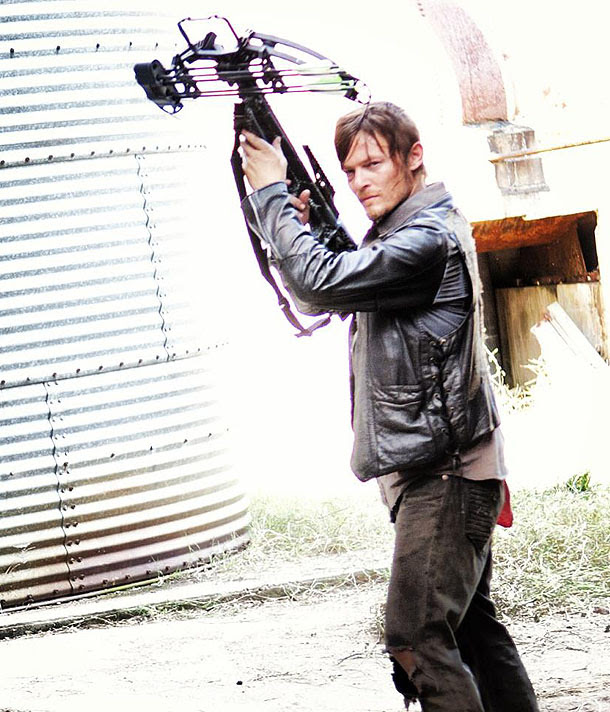 Who is Daryl Dixon from the Walking Dead?

Related:
The All Things Walking Dead HQ
Who is Rick Grimes?

Prior to the Zombie apocalypse Daryl says he was a nobody.  His older brother Meryl was a drug dealer and it seems he and others bossed Daryl around.  Daryl did acquire hunting, and tracking skills during his youth.  He seems more comfortable outside that most other characters.   It is hinted at times that Daryl may have been abused in some way.  His sexuality is also unclear with showrunners say they view him at times as A-sexual.  Despite, not showing sexual interest in other characters he himself is regarded as something of a cool, sex symbol of the series.

Daryl is part of the group of survivors that are on the highway on their way to Atlanta.  This group includes Lori and Carl Grimes the wife and child of Rick Grimes.  Rick is nearly killed trying to find his family in Atlanta.  He is rescued by members of the Highway group and they flee back to the camp.  As the group left Atlanta they left the violent, bigoted brother of Daryl, Merle handcuffed to a pipe.  Daryl is furious when he finds this out.  Rick agrees to go back and try to rescue Merle.  Once the group goes back they find that Merle has sawed his own hand off and escaped.  This horrific discovery initially angers Daryl.  However, he knows that Merle is cantankerous and violent individual and may have deserved it.

Daryl begins to bond with members of the survivors. In particular he forms a close friendship with Carol.  This friendship is cemented when Daryl goes on dangerous runs searching for Carol's lost daughter Sophia.  He also comes to respect the leadership of Rick and becomes one of his trust right hand men.  Michonne and Daryl also share a mutual respect as warriors.  He helps the group clean out and gain control of a local Prison. 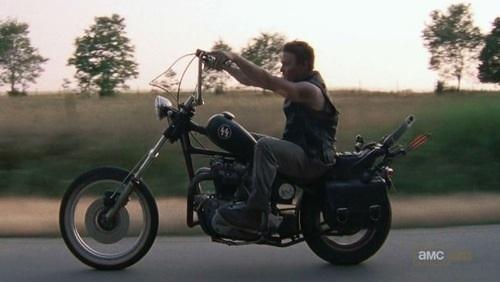 The Prison group begins to battle with another group of survivors from the sealed off town of Woodbury.  During the battles with Woodbury it is discovered that Merle is alive and well as one of the evil Governor's lieutenants.  He eventually joins the group but is killed by the Governor and turned into a zombie.  After the first battle with Woodbury Daryl takes on a leadership position in the groups Council.  He also is an active recruiter, and trusted scout.

When Woodbury strikes again the the Prison group is divided in the carnage.  Daryl and Beth find themselves off alone.  The two bond, but Daryl is devastated when Beth is kidnapped. As Daryl collapses in the road defeated after losing the kidnappers a motley group of men surround him.  The leader of the group called the Claimed Men likes Daryl and recruits him into the group.

The Claimed Men are hot on the trail of a man who killed one of their members.  They catch up to the man and the Claimed Men fan out to kill and rape the group.  The group turns out to be Michonne, Rick, and Carl.  Daryl recognizes his friends and helps his old friends dispose (In brutal fashion) of the Claimed Men.

The group then becomes trapped by the Cannibals of Terminus.  Daryl helps in the battle that defeats the Termites.  Daryl sees a car with similar markings as the one that kidnapped Beth and follows it.  This leads him and Carol into the heart of Atlanta.  He learns that the Slabtown group made up of former Alanta Police force have created a group of survivors and kidnap people.  He finds an escapee from the group named Noah.  With Noah's help, Rick's crew create a plan of capturing the Slabtown police officers for a prisoner exchange.  The exchange goes sour when the leader of Police demands Noah's return and in the confusion that follows Beth is killed.  Daryl is devastated by this.

Daryl is with the group as they join the Alexandria Safe Zone.   He becomes a recruiter for the Safe Zone along with Aaron.