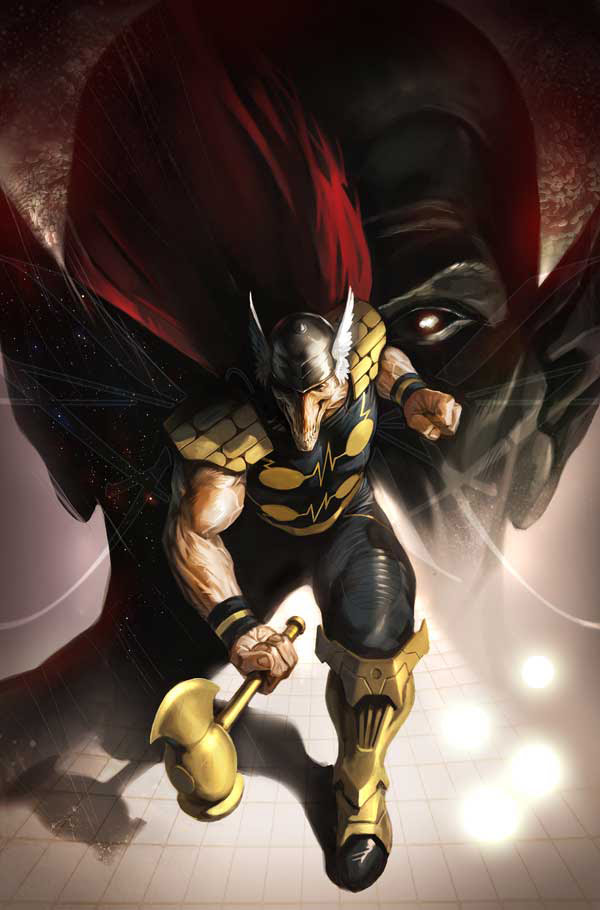 Beta Ray Bill is a monstrous looking cosmic hero who is very popular with comic fans..
He is most known for his connection to the character Thor.  He is a warrior, that has been genetically augmented to be the protector of his alien race the Korbinites.

Beta Ray Bill News:
Is that Beta Ray Bill in Guardians of the Galaxy?
What is hiding in the Collector's Museum?
Who can lift Thor's Hammer and why?

The Korbinites were attacked by the evil Asgardian Demon Surtur (Also a Thor villain) and their planet was destroyed.  The Korbinites travel in a fleet of vessels with the primary vessel called the Skuttlebut.

Beta Ray Bill is initially mistaken for Thor because his outfit is so similar.  It turns out that Beta Ray Bill is capable of picking up Thor's hammer.  Which due the hammer's bizarre power of only allowing the worthy to pick it up is very unique.  Intrigued Odin has the two heroes battle in a duel on a fiery world.  The battle for who is most worthy is an epic hand to hand battle and eventually they knock each other out.  Due to his resistance to heat Bill wakes up first but instead of killing Thor he saves him.    He found Thor to be too worthy of an opponent to let him die.
Eventually, Bill is given his own hammer the Storm Breaker by Odin and he and Thor go on to battle Surtur together.

Beta Ray Bill appears from time in both the Thor comics and occasionally his own series.


In this mini series Galactus has killed off all of the remaining Korbinites and Beta Ray Bill sets off to kill the world eater.  He nearly succeeds in this by destroying Galactus's targeted worlds before he can feed.  This effectively starves and weakness Galactus.  However, Bill relents when he learns that Galactus has important part to play in the cosmic ecosystem.

Galactus as payment for letting him live creates one other Korbinite the female Ti Asha Ra with whom Bill can repopulate his race.

In addition to these powers Bill is a great hand to hand fighter.  He has fought Thor to a standstill.  He also has his own enchanted hammer called Storm Breaker which is very similar to Thor's Mjolnir.  Bill also has access to advanced alien technology that includes a space ship called Skuttlebutt.  Storm Breaker gives Bill the ability to manipulate electricity, the weather and the ability to fly.


Related:
Who is Thor?
Who is Odin?
Who can lift Thor's Hammer and why?
Meet Ti Asha Ra the most secret character in Guardians of the Galaxy
Who is Starlords Father and Why he is Important
Who are the Korbinites?
What is hiding in the Collector's Museum?
Marvel Alien Races and Cosmic Maps
Is Morag on GotG actually Kymellia I?