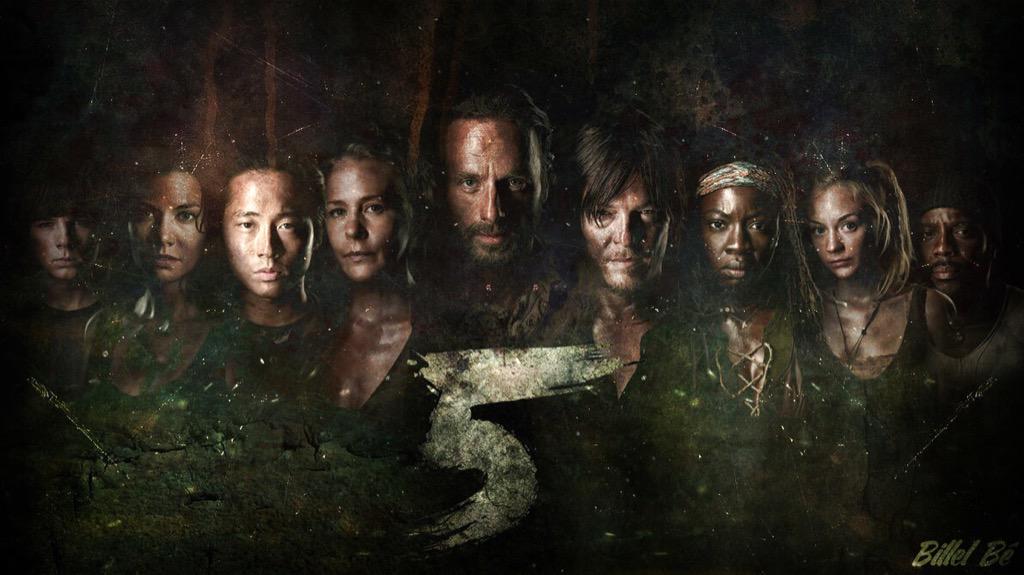 Next weeks walking dead finale is 90 minutes long or 1 and half times longer than a normal episode.  Due to its size, and it being a finale I expect quite a bit will occur.

You can watch the promo for the Season 5 Finale here:

"Ain't nothing sadder than an outdoor cat that thinks he's an indoor cat"
This line was first spoken to Daryl by the leader of the Claimed Men.  Its meaning has continued to be toyed with over the course of the season in the context of different characters.  The first meaning was simply that Daryl did not belong settled down amongst civilization, he belonged free, and outside.   It also draws up the question of, "Who are you?"  and "Can you change?" and perhaps most important of all "Are you lying to yourself?"

Over the later half of the series the survivors of Rick's group all seem to be outdoor cats trying to be indoor cats.   Certainly, the obvious character with this problem is Daryl but Daryl actually finds his place working with Aaron outside the walls.  The other characters all seem to be struggling with the want to be normal, but the need to keep their edge.  They don't want to grow complacent, they don't want to grow weak.  As good as Alexandria seems they know that the outside world can come crashing in at any time.

Michonne is certainly struggling with who she is, and who she wants to be.  As is Abraham Ford.  Abraham's act of saving Francine and taking over the construction crew from Tobin does show that some of the outdoor cats are more capable than the indoor ones.

Rick seems to be struggling with the pull between the outside world and the civilized one more than many of the others.  Perhaps, this is because he still feels the weight of leadership and responsibility for the others.

Rick as the leader of the outdoor cats and Deanna the queen of the indoor cats are already in conflict.  There are things, Rick has learned from surviving, but do these lessons make him too far gone to live in a civilized manner.  He is openly challenging the idea of living by the rules.

The survivors began the season in a rail car prison of a group of Cannibals marked with an A.  They arrived in the rail car by following a path that was marked by the letter "A".   As prisoners they were effectively weak and powerless and under other people's thumb.  It took a lot of luck for the them to escape and fight their way out.  They made sure the Termites would never harass them again by brutally killing them.  In effect they have no interest in ever being in that position again, and will take out threats quickly.  This seems to be Rick's thinking in regards to Pete.  Pete is a known threat that needs to be taken care of now and not later.
When Rick comes to Alexandria the young boy Ron Anderson gives him a stamp of an A.  Ron explains that the A is "Their Stamp" and now he is "One of them".  This is symbolically drawing upon how Rick is feeling in the civilized Alexandria.  He is feeling like he is being made weak, and vulnerable.  If he is going to join Alexandria it may mean putting him in a place where he can be thrown back into a rail car.

In contrast to the weak looking members of the "A" clan there is another group that appears brutal and sadistic marking their deeds with a "W".    There are a few graffiti references to a group that calls themselves the Wolves who is likely behind these acts.  The Wolves are not weak, they are survivors and seem to roam around without a true home.  This group appears to be far gone from civilization and has turned outright barbaric and evil.   Daryl and Aaron are horrified when they find the Wolves handiwork in the woods.  They find a dead girl tied to a tree.  It seems the Wolves allowed walkers to eat her alive.  They also left a variety of body parts littered on the ground indicating they have carted off the rest of the bodies perhaps to intimidate others.

W also of course stands for Walker the groups term for Zombies.  Effectively, W means wild, unrestrained brutality.  It could also stand for the "World" as in the real world the group lives in.

Is Rick and his crew of outdoor cats As or Ws?  It seems likely they are something in-between.  Perhaps, the world is so far gone that you can't survive as an "A" anymore, maybe you need something in-between to fight off the worst evils out in the world and allow for some form of civilization to rise up.  There may be a symbol or a letter between an A and a W that is for this balanced mentality.  Perhaps the letter is an M or a W flipped upside down that falls between the As and Ws.

It should also be noted that there is a J on the gun that Rick hid.  The gun was found by Nicholas.  We know that Nicholas is a guy that the Alexandrians have been using to protect their town.  He is a guy who wants to be tough and brave but is an utter coward, when confronted with danger.  Perhaps the "J" symbol represents a kind of a joker, or a poser, a person who thinks they could survive outside but really can't.

Plot Points coming to a head:
The show has been building up a few story lines  and themes that will likely be resolved in this episode:

Rick - Leader or exiled - Rick will likely be either made into the leader of the town or flat out exiled.  How far will the Alexandrians go to get rid of him?  Also how long will it take for them to realize that they need him.  Will Deanna Monroe decide to anoint Rick, or seek to get rid of him?

Pete -Pete is a full on sociopath and nothing is likely to stop him other than being killed.  Expect him to make this point a little more dramatically in the next episode.

Nicholas and the J gun - It is revealed that Nicholas found and rehid the gun with the "J" marking.  Which shows that he is effectively keeping a secret weapon from the community.  He does not like that Glenn and the other newcommers can see through him, or that they know he is a coward.  How far will he go to try to keep up his appearance of being the town's tough guy hero?

Sasha - Sasha is shown to be an outdoor cat having troubles living inside.  She is also shown to be a wicked good aim.  Will she find her place soon in the community the way Daryl has seemed to?

Morgan - The guy is out there somewhere.  Will he show up in the finale?  Will he be a savior or something else?

Growing Zombie presence -  The number of zombies outside the walls is growing dramatically.  This could be in part due to the presence of the Wolves group who seems to starting fires and killing people close by.   As Rick is confronting Pete we see Sasha firing and firing upon a small herd of Walkers outside the fence.  Some of the Alexandrians are shown wincing at the sound of her rifle firing.  I get the feeling they are not comfortable with a large group of walkers outside their walls.  It seems a herd could very well be coming their way.

The Wolves - The handiwork of a brutal group that signs their work with a W has been shown.  There is also graffiti referring to a group called the "Wolves".  Daryl and Aaron see a fire and stumble upon more of the their victims.  Daryl says that this happened recently indicating they are close by.


You can watch the promo for the Season 5 Finale here: