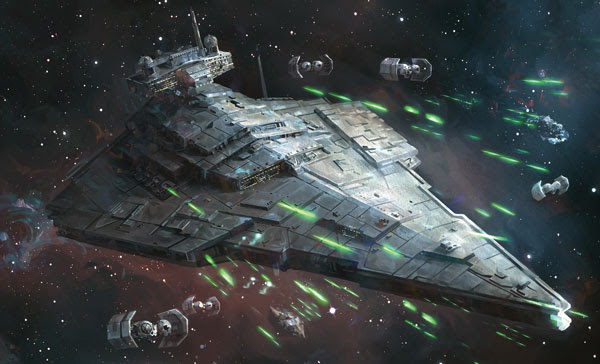 The term Star Destroyer refers generally to a large capital vessell with the fire power capability of destroying an entire star system.  Star Destroyers are known for having a dagger like shape which is used so the ship can maximize its fire power forward.

Victory Class:
The Victory Class Star Destroyers were built by the Star Ship Company Rendili Star Drive.  Manufacturing of the Victory-class began in the clone wars and the ships continued into use for decades afterward.

Victory I class:
These were produced very quickly and were considered a rush job and had many noted flaws.  The ships were 900 meters long.  They successfully served in the Imperial Navy for many decades despite their flaws.

Victory II class:
This model cleaned up some of the flaws of the Victory class I.  They were produced at the onset of the Galactic Empire.  Though they were enhanced beyond the class I model less were produced.  Generally the more common and known class was the Type I.

Here are the stat cards for the Victory type I and II
Type I and Type II have the same general stats for Shields, Speed, etc but they differ in their upgrade capabilities and Fleet Point Cost.

The Victory class Star Destroyer comes in the Core set and as an expansion pack to Star Wars Armada.  The expansion pack comes with different officers and upgrades for greater customization.