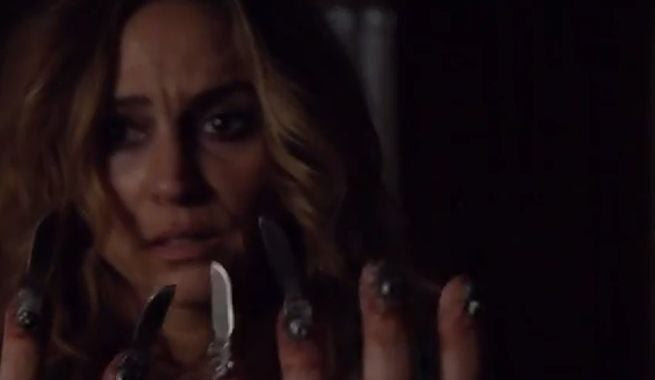 Skye's father Cal is back and he has brought some friends.   Somehow Cal has found or created a team of super villains who are bent Coulson's destruction.

Among this group is the Marvel villian Angar the Screamer.

Cal's team:
David A Angar - Known in the comics as Angar the Screamer.  Who has a voice that can create hallucinogenic effects to those who hear it.  His scream can cause permanent hearing loss and insanity.

Francis Noche - Unknown - There was a man named Francis who became a high powered villain named Ajax.  He is part of the Weapon X and Deadpool's origin story.

Karla Faye Gideon- An abused wife who appears in the Daredevil comics - This version sports what looks to be metal claws.

"One of Us" - Cal seeks revenge on Coulson by assembling a team of Super Villains to destroy S.H.I.E.L.D. Meanwhile, May calls on renowned Dr. Andrew Garner (Blair Underwood), her charismatic ex-husband, with a crisis that threatens to tear the team apart, on "Marvel's Agents of S.H.I.E.L.D.," Tuesday, March 17 (9:00-10:00 p.m., ET) on the ABC Television Network.

Related:
Marvels Agent of Shield speculation HUB
What are Bobbi and Mack hiding?
"Who you really are" Promo and Analysis