"And there came a day, a day unlike any other, when Earth's mightiest heroes and heroines found themselves united against a common threat. On that day, the Avengers were born—to fight the foes no single super hero could withstand! Through the years, their roster has prospered, changing many times, their glory has never been denied! Heed the call, then—for now, the Avengers Assemble!"
—Prologue from The Avengers used in the 1970s 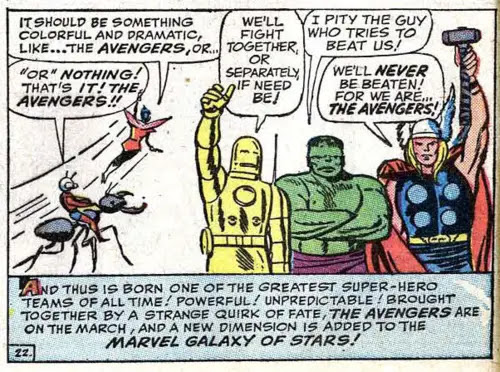 The creation of the first Avengers team was due to the machinations of the Asgardian god Loki.  Loki was scheming to use the Hulk as the means of pummeling his brother Thor.  When a distress signal was sent about the Hulk rampaging to the Fantastic Four, Loki diverted the signal to Thor.  The diverted signal also is picked by Ant-Man, Wasp, and Iron Man who all arrive at the site.  Getting over the bizarre circumstance of their arrival the heroes unite and defeat Loki.  Ant-Man suggest they create a team, and the Wasp suggests the name the Avengers.  Thus the first Avengers team is born.

Who is the Wasp AKA Janet van Dyne?

Related:
All Avengers Movie news and speculation
on March 05, 2015