There are going to be a few different Spider-Man centric titles over the Secret Wars event.  One of the more interesting ones will be a timeline/world place where a Spider-Man will appear that is still married to Mary Jane and has a child.


Renew Your Vows:
Writer Dan Slott described this series to Entertainment Weekly as having a throw back to some classic (ie Prior to Brand New Day) elements to it.

"You haven’t seen Spider-Man’s classic villains the way you know and love—I wouldn’t be surprised to see Eddie Brock as Venom in this story. Or Sergei Kravinoff as Kraven the Hunter in this story. There’s going to be a lot of bullets in the gun for things you wanted to see in a Spider-Man story that you haven’t seen in a while. This is the ultimate classic feel. This is the last Eddie Brock story. The stakes have never been higher for Peter Parker because he’s never had so much to lose. So he has never been this close to the edge. And these are the Last Days."

SPIDER-ISLAND #4 (of 5)
CHRISTOS GAGE (w) • PACO DIAZ LUQUE (a)
Cover by HUMBERTO RAMOS
• Venom and his band of monstrous allies take the fight straight to the Spider-Queen!
• One hero makes the ultimate sacrifice.
32 PGS./Rated T …$3.99


Spider-Verse
There will also be a Spider-Verse spin off that features a teams of Spider-Totems  Spider-Man fans have met and thoroughly enjoyed some new versions of Spider-Man in the Spider-Verse story.  Within the huge Battleworld of Marvel upcoming Secret Wars event there will be an area where the remnants of the Spider-Verse story carry on:
Official Synopsis:
Their battle with Morlun and the Inheritors may be over, but the war is just heating up! Stranded on Battleworld a small band of universe-hopping heroes – Spider-Gwen, Spider-Man Noir, Spider-Man: India, Spider-Girl, Spider-UK and Spider-Ham – will find themselves face to face with the horrors of Battleworld. How did they get here? What happened to their homes? What tragedy has befallen this region of Battleworld and how will these Spider-Men and Women deal with it?

“The SPIDER-VERSE event in AMAZING SPIDER-MAN brought you the first team of Spider-Men,” says Senior Editor Nick Lowe, “but not the last! Here we build and expand upon the Spider-Verse story in insane new ways!”
Amidst the horrors of the Secret Wars, six spider powered heroes stand alone. But here, united as one on the surface of Battleworld, are they here for a new beginning, or a grisly ending?  Webs will be slung. Walls shall be crawled. And the answers you seek like in the can’t miss pages of SPIDER-VERSE #1 – swinging in to comic shops and digital devices this May!


I am personally really excited for this.  I was getting bummed at the thought of not seeing Spider-Ham and Spider-Noir for another 5-10 years.

One other note:
Why no Miles Morales? Where does he end up in the battleworld?  Or does he survive at all? I don't see Marvel getting rid of Miles so my guess is he somewhere in that world. 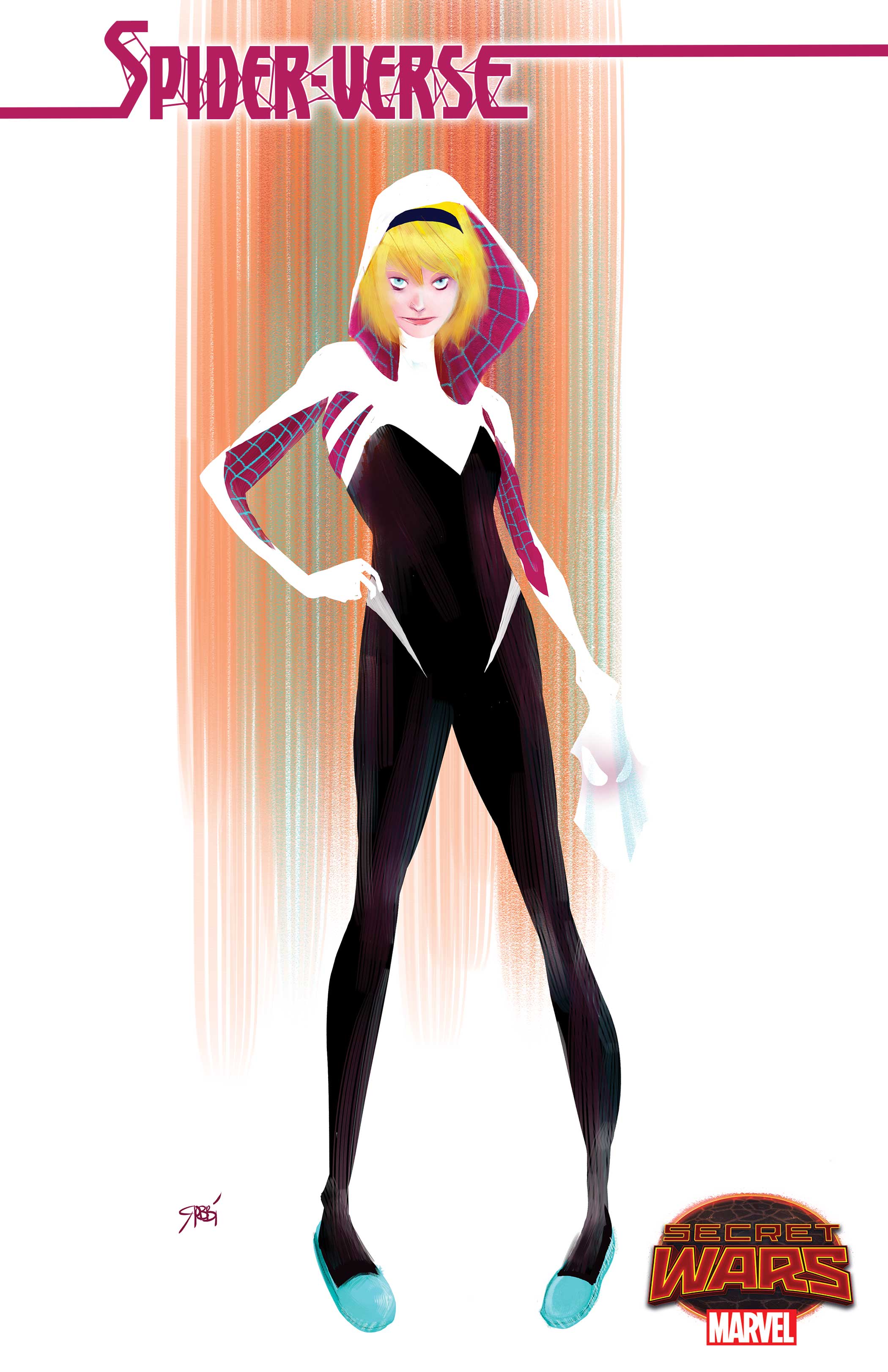 
Related:
Spider-Man Fan Land! All Spidey News All the Time!

Want to learn more about these Spider-Totems! Check out their profiles below:

Who is Mayday Parker?