Zed is a psychic friend and sometimes lover of John Constantine.  She is featured in the Hellblazer comics.  She is also a character in the Constantine TV series and is played by actress Angelica Celaya.  Zed was not in the pilot episode and was brought in to replace the former female lead of the pilot a character called Liv Aberdeen. Live Aberdeen was not in the comic and was exclusively created for the show.  After the pilot the show producers felt the character of Zed was more appropriate than the Liv character they had created and switched them.

Bio:
Comic Bio:
John Constantine meets Zed in a London alleyway.  She brings him back to her apartment where he sees her art including a picture she had drawn of him.  This showed John that Zed had a form of precognitive abilities, she then joined up with him on some of his adventures.

There is a prophesy that an important child is about to be born.  Zed's father, Elder Martin believes Zed will be the mother of this important child whom he hopes will be a new messiah.  Elder Martin is the leader of a group called the Resurrection Crusade.  The group is trying to kidnap her and use her to create the child.  The demon Nergle is also aware of the prophesy and seeks to create an Anti-Christ instead.  He sends a grotesque agent to kill Zed but is thwarted by John Constantine.

Group member's kidnap Zed and plan to do a special ritual but are disappointed to learn that her innocence (necessary for the ritual) had been spoiled by John Constantine.  Constantine manages to fullfill the prophesy by lending his body to Swampthing so it could be used to conceive a wife with the Thing's love interest.  This works and the important child born is that of Swampthing and neither a messiah or an anti-christ.

Zed has reappeared in other comics often as a pagan sorceress living in Scotland.

TV Bio:
The Zed on the show is similar to the comic version with one major difference being that she is American as opposed to British.  Zed has psychic abilities and receives visions from people or items she touches.  She often gets very emotional and wants to help, which puts her at odds with the aloof John Constantine.  Zed also does not like being kept out of harms way by John.  She is often awestruck at seeing Angels and Demons, even as it is just another day for Constantine.

Constantine says she has a "Bitta" everything, her powers have been shown to include: precognition, retrocognition, and clairtangence.

In one episode shown to be hunted by the cult of her father the Resurrection Crusade.  Presumably, they want to use her as a vessel to give birth to a new messiah.

In one episode it is revealed that a tumor is growing in her brain that could either be the cause of, or caused by her powers.  She is reassured by angel Manny that her powers are good, and she chooses not to have biopsy done on the tumor.  She realizes that her power may come at a cost. 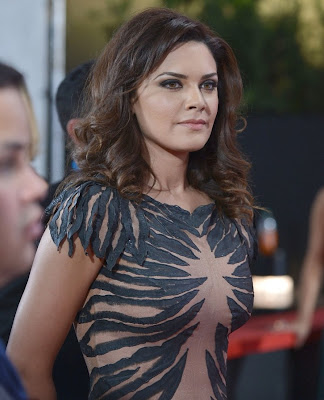