Who is John Constantine? 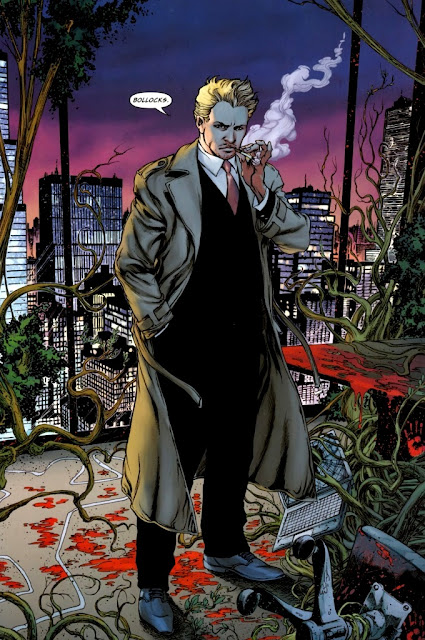 Who is John Constantine?

John Constantine is a famous or perhaps it should be said infamous, occult detective, magician and dabbler in the dark arts who uses his skills to thwart dark forces on Earth.  The character Constantine has been featured in a film staring Keanu Reeves, and in a TV show staring Matt Ryan.

Fans of the show are currently trying to save it using the hashtag:
#Saveconstantine

John Constantine is a well known magician, and practitioner of the dark arts who is called out to deal with paranormal dangers in the world.  He is abrasive, disillusioned, foul-mouthed, cynical and indulges in actions that many consider "unholy" such as cigarettes, alcohol, drugs, sex, and rock and roll.  He is also a liar, conman and is generally considered to be a lousy friend.   He has many girl freinds but they never work out (Likely because he has many girl freinds).  Despite, his non religious life-style he consorts with Angels, clergy and nuns who believe he is the best hope of defeating demonic entities and dark prophesies like the anti-Christ.  While John despises being used by either the forces of light or darkness, he does seek to do good and redemption from his past actions.  This most often puts him on the side of light and Angelic entities, in opposition to various dark mages, cults and demons.  He is willing to work against Heavenly interference on Earth and does from time to time.

Birth:  During Constantine's birth his twin brother was killed by being strangled by John's umbilical cord.  The birth also killed his mother.  These death may have been partially caused by an attempt at abortion by John's abusive, alcoholic father.  In an alternative universe, it was shown that John's twin brother survived the birth and grew up to be a happy, skilled, and good magician.  John's father blames him for the death of his brother and mother.

Magical Beginnings: John is sometimes to as the constant one.  This references the fact that his family has generally always been associated in various ways with the occult and magic.  In his home town his family was referred to as the "Laughing Magicians".  They have a long history of seeking bizarre coincidences, tricking powerful entities, and conjuring up various forms of magic.
When John's father is let out of prison, John and his older sister Cheryl more back in with him.  John begins hearing the rumors about his family and earnestly begins researching magic.  The goal of this being primarily to deal with his abusive father.  He uses a spell to lock up all of his childhood innocence and vulnerability into a box.  As teenager he castes a hex on his father (potentially accidentally) that made him frail and withered.  John then runs away from home.

John joins various occult circles in London and throughout the world.  He makes many contacts and has some interesting girl freinds like Zantanna Zatara.  He also starts up his own Punk rock band called the Mucous Membrane.  He also dabbles as a stage magician where he draws attention to himself for accurately predicting an attempt on the life of President Reagan.  Going on tour with the band allows John to meet numerous people, many of these people will prove to be valuable contacts that he will use in the future.

John stumbles upon a bizarre scene with his band in New Castle.  An abused girl named Astra had managed to summon a monster to attack her tormentors but now was running amok.  John assembles a crew to battle the demon from his band and occult friends called the "New Castle Crew".  The New Castle Crew fails miserably in their attempt to help and the members are left severely psychologically scarred and blame John for life.   John summoned a demon named Nergle to destroy the beast and it did.  However Nergle was not under his control and it began attacking the members of the New Castle Group.  Before Constantine could desummon the demon it grabbed Astra and drug the child to hell with it.  Unable to cope with incident Constantine ends up in a psychiatry ward called Ravenscar where he is badly abused, by workers who think he killed Astra.

The Hero:
John is freed from Ravencroft by a group of London gangsters who to resurrect the son of their leader.
From this point on John goes on many adventures to redeem himself for the loss of Astra.  He pulls together his remaining contacts and notably his longtime friend Chas and goes on adventures putting down evil.

Constantine is generally completely outmatched from a physical and even magical power stand point.  He is however very cunning, manipulative and knowledgeable on the occult which allows him to exploit weaknesses of what ever horror he is dealing with.

Magic - John is considered to be one of the most powerful sorcerers on Earth.  Though he generally uses magic only when necessary.