Who is John Amon from "I, Zombie"? 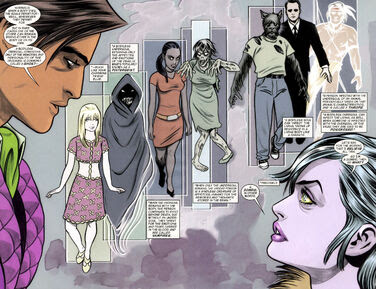 Who is John Amon from "I, Zombie"?

John Amon is a an ancient mummy who died many year ago in Egypt.  He now lives in Eugene Oregon. In order to stay young he feeds off the souls of living people.  He chooses to drain those who are evil and bad.  Gwen ends up finding Amon by following up a murder of one of those that Amon killed.  She does not end up fighting him however, as she realizes the man that John killed was evil.

John due to his ancient age is very knowledgeable in the supernatural.

It is due to John that Gwen ended up becoming a zombie / revenant in the first place.

John is trying to save the world from a Lovecraftian like god/monster called Xitalu.  Xitalu can be delayed through sacrifice of lives.  John tells Gwen that the only way to appease Xitalu is for her to feed / absorb the souls of everyone in town and then sacrifice herself to it.  Unable to kill her friends Gwen finds another option.  She sucks the soul of Xitalu itself and becomes of a higher dimension leaving her own world behind.  John is killed by hounds of Xitalu before Gwen is able to stop the evil entity.

Powers:
John is a mummy and effectively immortal if he feeds off the living.
Immortal
Healing

John has a wife Ubasti who shares a body with a leopard.  She turns into a human on one day a year that she prefers to spend with her husband.