Who is Deanna / Douglas Monroe from The Walking Dead? 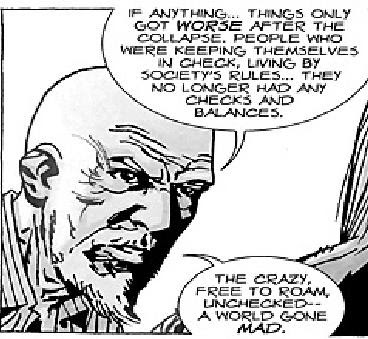 Who is Douglas Monroe from The Walking Dead?

Douglas Monroe is the leader of the Alexandria Safe-Zone a refuge of survivors in the zombie apocalypse.  Due to his lewd behavior around women Rick accuses Douglas of being a poor leader.  After Rick Grimes helps defend the community Douglas gives control of the community to Rick.

Related:
What is the Alexandria Safe-Zone?
The All Things Walking Dead HQ

History:
Prior the zombie apocalypse Douglas Monroe was a Democrat Congressman from Ohio.  It is from this appointment that he is given the invite to the Alexandria Safe Zone.

A man named Alexander Davidson build the walls around the Safe Zone.  He invites his friend Douglas Monroe to come and be his Co-leader.   Alexander begins taking advantage of women forcing Douglas to banish him and take over as leader.  When Rick arrives Douglas leads around 60 residents.

Rick and Douglas are both skeptical of each other.  Despite, his doubts about Rick he begins assigning the group to different jobs in the community.   Douglas even asks for advice on where to place Andrea.   Rick has her placed in a watch tower as a sniper.

Douglas begins acting in a similar lecherous way as Alexander Davidson.  Even though he is married to Regina he begins seeking out attractive women to make into girlfriends.  He is also accused of promoting attractive females to high ranking positions.  Rick accuses Douglas of being a lousy leader.   The riff between the two leaders reaches a head when Rick gets in a fight with Pete.   Douglas wants to punish Rick.   However, Pete goes on a rampage and what saves the community is Andrea blasting him from the watch tower.  This event makes Douglas feel pretty stupid.

No Way Out
When zombies attack the Safe Zone Douglas is overcome by zombies he fires his gun and shoots Carl in the head.   Douglas is torn up by the zombies. 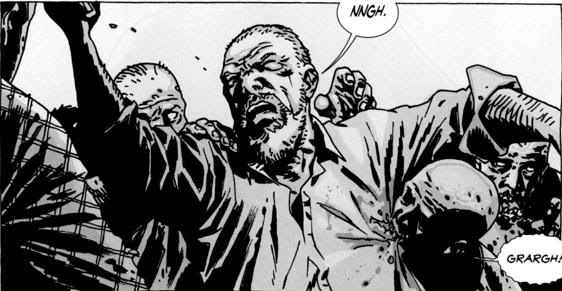 Deanna Monroe:
In the show Douglas Monroe has been changed in to a female character,  Deanna Monroe.   Like her comic counterpart she is a former member of the Ohio Congress.   She was brought into the community of Alexandria after the outbreak broke out and has led it ever since.

She is a savvy leader and is good at reading people.

Deanna immediately sees Rick as a good strong person who could help the rather sheltered community of Alexandria.  She gives him and Michonne the job of Constable.

Deanna;s son is shown leading a supply run with Glenn, Tara, and Noah.   He is arrogant and green.   When Tara is nearly killed by a walker he is insisting they play with Glenn kills it.   This leads to a confrontation between Glenn and Deanna's son.   Glenn knocks him out.   Curiously, Deanna is not angry about this and actually thanks Glenn.  However, on the next supply run her son is killed.  Gabriel also comes to say that the other survivors are evil and compares them to the false light of Lucifer.  This causes Deanna to lose trust in the new survivors.

Rick confronts Pete Anderson about his abuse the two have a large fight that leads them to crash through a window and into the street.  During the confrontation Rick waves a gun around, and accuses the community of not being ready to deal with the real world.  He is knocked out by Michonne.  Deanna seizes the opportunity to create a meeting with the attempt of kicking Rick out of the community.  This attempt is derailed when Walkers break into the community and Rick kills them.  Also Pete attacks the group and kills her husband Reg.   Deanna then asks Rick to do it.  He pulls out his gun and executes Pete.  This act seemingly symbolizes Deanna handing over some control to Rick and his way of doing things.

The All Things Walking Dead HQ
What is the Alexandria Safe-Zone?
Who is Alexander Davidson leader of the Wolves?